Verge is a cryptocurrency designed for people and for everyday use. It improves upon the original Bitcoin blockchain and aims to fulfill its initial purpose of providing individuals and businesses with a fast, efficient and decentralized way of making direct transactions while maintaining your privacy.

The origins of Verge (XVG) date back to 2014. Originally the project was founded under the name DogeCoinDark, which was a hard fork from Dogecoin. Dogecoin itself was based on the open source source code of Litecoin, which itself is based on the source code of Bitcoin. So it can be explained that Verge wants to improve the “original Bitcoin blockchain”. DogeCoinDark was renamed to Verge in 2016.

Verge focuses on the privacy and anonymity of its users. Just like Monero, ZCash, Dash or Bytecoin, Verge (XVG) can be assigned to the “Privacy Coins”, which disguise the user’s transaction data and make transactions untraceable. Verge attaches particular importance to user-friendliness in order to promote application in everyday use.

Verge has integrated the Tor network into its wallets so that not only the transaction data (as of the use of a wallet) is encrypted, so that the extra step of setting up the Tor network is no longer necessary for the user. Both Tor and I2P are automatically used in Verge’s wallet transactions so that both IP addressing information and transaction information do not reach the servers through which the user connects to the Internet. This gives the blockchain concept an additional layer of security when a transaction is compromised.

The current price of Verge can be viewed here. If you would like to check the prices of Bitcoin and Ethereum, take a look at our course overview with over 2,000 Altcoins.

As explained in Verge’s brief description of the project website, Verge has been designed to enable convenient payments in daily use and the user does not have to pay with 0.00002 BTC. As a result, Verge’s overall offer (XVG) was set relatively high compared to Bitcoin at around XVG 16,5 billion. Of these, around 9 billion were released in the first year of 2014 and a further billion annually since then. This is continued until all coins are distributed on the market. At the time of writing (October 2018), 15.1 billion XVG had already been released.

Two different technologies are used to make user data anonymous, which ensure that user identities are obscured at all times. These are I2P and Tor. I2P is an anonymous and highly obfuscated tunneling service that uses IPV6 and anonymizes all Verge data sent over the network by using a total of four layers of encryption per packet. Within the peer-to-peer network, data traffic is routed through constantly changing participants and different tunnels. I2P is thus a key technology to ensure the anonymity of users.

The Tor network is an IP obfuscation service that enables anonymous communication over a layer-based network. Verge has integrated Tor into all wallets, eliminating every single point where communicating peers can be compromised by network monitoring.

Verge is a proof-of-work coin. The project website states that

PoS (proof-of-stake) systems wrongly benefit users with the most coins, making the rich richer. This is currently also a problem with traditional fiat currencies (e.g. USD).

Verge supports various mining algorithms. This means that people with different types of hardware are able to mine verges, which should bring more security through decentralization and a fairer distribution of XVG coins. The five mining algorithms are: Scrypt, X17, Lyra2rev2, myr-groestl and blake2s. All five algorithms have a block time of 30 seconds, whereby the difficulty is influenced by the hash rate of each algorithm.

The Wraith protocol is a technology upgrade released by Verge in 2018 that allows the user to switch between the public and private ledgers on the Verge blockchain. While the identity information in the public ledger (as with Bitcoin) is pseudoanonymous, the Wraith protocol allows the user to choose whether to display transaction data (transaction amount, sender and recipient addresses, and address account balance) using the Blockchain Explorer. 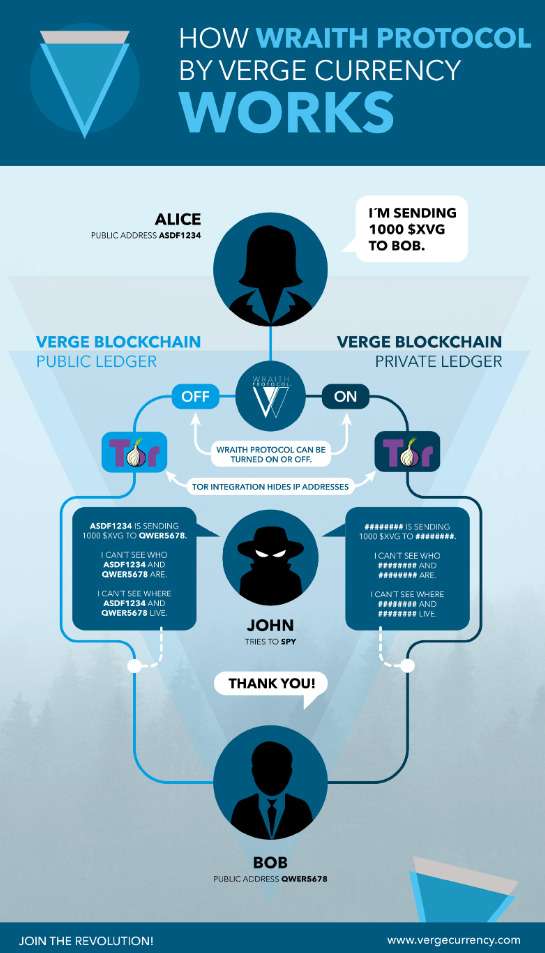 The team behind Verge

The Verge project is 100% open source and is represented by the worldwide Verge community, which drives it through its volunteer work. Verge is not a company. Thus, it can also be explained that there was no ICO at the time of the introduction and therefore no pre-mining took place. All contributors, including the core team, are unpaid volunteers who contribute their time and energy to the project because they are passionate and believe in Verge.

As of October 2018, Verge has provided the following roadmap: 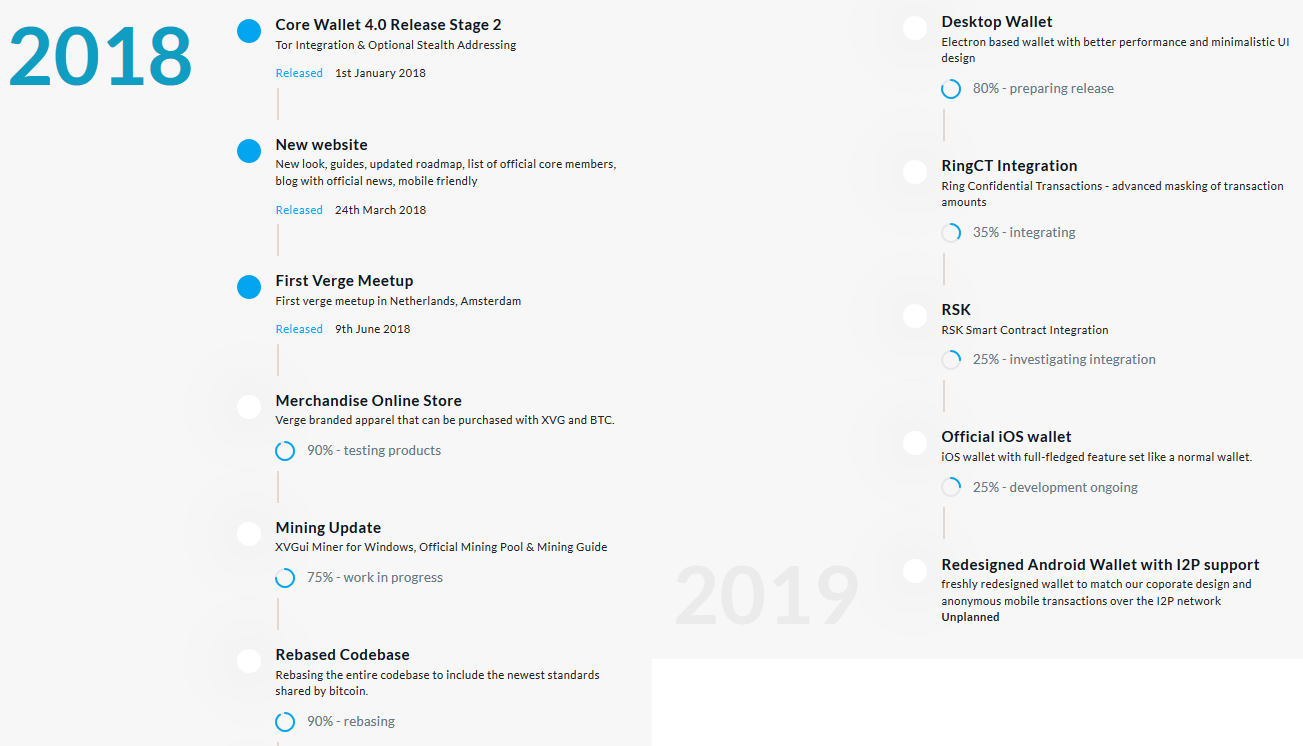 In addition to the Merchandise Store, whose revenues will be used to pay the active volunteers, a Mining and Desktop Wallet Update, as well as the refactoring of the code base are very advanced. From a technical point of view, however, Ring Confidential Transactions, which enable improved masking of transaction amounts and are already used by Monero, and the integration of RSK Smart Contracts are particularly interesting.

Bottom line: Is XVG worth an investment?

The market segment of anonymous crypto currencies is already a highly competitive market with established privacy coins such as Monero, Dash and ZCash.

In December 2017, Verge experienced an incredible pump from the promotion of John McAfee, with Verge rising from USD 0.008 to just over USD 0.28 for a short time.

I am inundated by people asking me for recommendations on cryptocurrencies. If you would use your heads you would figure out that the privacy coins (anonymous transactions) will have the greatest future. Coins like Monero (XMR), Verge (XVG), or Zcash (ZEC) cannot lose.