What is: Basic Attention Token (BAT)?

The Basic Attention Token, or BAT for short, is a utility token based on the Ethereum blockchain (ERC20 token) which serves as a billing unit for the blockchain-based advertising platform. The platform aims to revolutionize the online advertising industry by eliminating middlemen, protecting users’ privacy, reducing ad fraud and sharing revenue with users. For this purpose, the platform provides the Brave Browser, which in combination with the utility token creates a new, decentralized online advertising platform.

The primary task of the Basic Attention Token (BAT) is to be used within the Brave browser system. The token is designed to radically improve the efficiency of digital advertising by creating a new token that can be exchanged between publishers, advertisers and users.

The Basic Attention Token (BAT) can also be traded independently of this on cryptocurrency exchanges, although the BAT team does not promote exchange trading in any way. The team behind the token also expressly points out on its website that BAT is not an investment, stock, security or digital currency, but merely a utility token.

Where can BAT be used?

The utility token is used to execute transactions. The token is used, for example, in the acquisition of advertising space that is to be filled with privately agreed, anonymously confirmed ads. On the other hand, the BAT token can also be used directly for measuring and checking attention.

In view of the open source character of the project, however, the developers also assume that third parties will develop novel applications for the token during the development of the BAT protocol. Some of them might be according to the official website:

Digital advertising is dominated by middlemen, trackers and fraudsters. According to statistics published on the official BAT website, users of regular browsers suffer extremely from today’s online advertising industry. On average, displays consume about 5 seconds more mobile charging time, shorten the battery life of the smartphone by up to 21% and even significantly violate privacy when large media sites host up to 70 trackers.

In turn, the middlemen, like Google and Facebook, are the big winners of the online marketing industry. According to BAT data, they account for 73% of all advertising revenues and 99% of all growth rates. The Basic Attention Token platform wants to solve these problems.

How does the Basic Attention Token Platform work?

The platform is based on the Brave Browser, an open-source browser focused on data protection that blocks ads and cookies from the “traditional” online advertising system and at the same time anonymously analyzes user behavior by storing data locally.

The special thing about the system compared to traditional browsers and the advertising model is that the Brave browser is completely transparent and keeps user data secret, while at the same time displaying fewer, but more relevant, ads. In addition, Brave browser users also receive a small amount in BAT for viewing and participating in advertising. At the same time, publishers receive more revenue by reducing middlemen and fraud. And advertisers get better data on their spending.

Within the BAT ecosystem, advertisers pay publishers in BAT, with payment levels based on measured user attention. Attention is a measure that is measured by users viewing ads and content in the active tab of the browser in real time. The attention value for the ad is then calculated on the basis of the incremental duration and the pixels in relation to the relevant content. 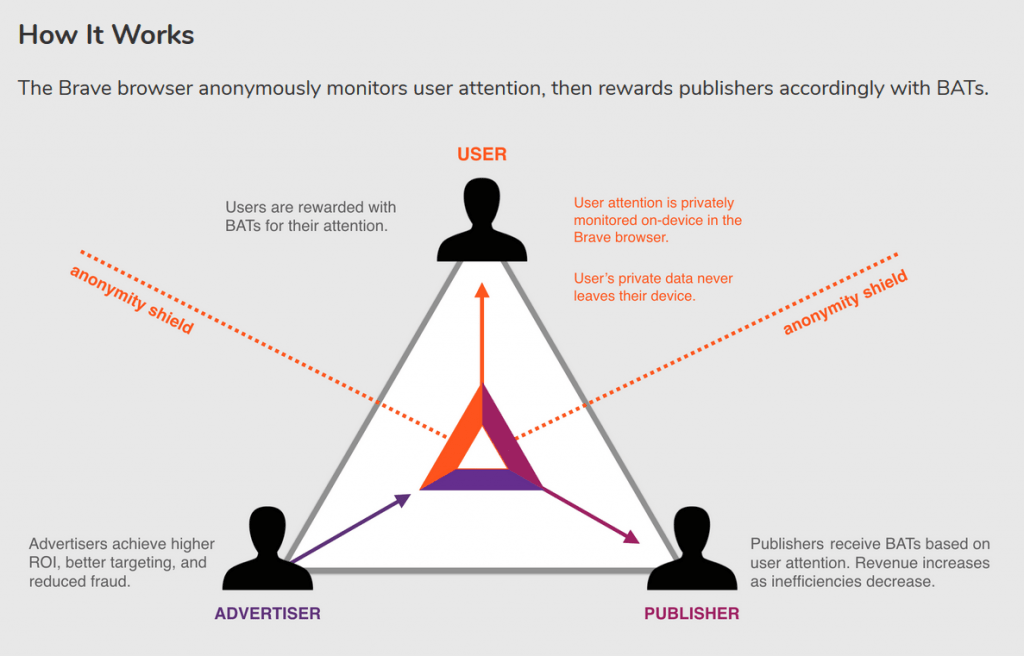 It is important to know that only websites that are approved for the Brave browser can participate in the BAT system. On 05 January 2019, Brave announced that it had 5.5 million active users and 28,000 verified publishers. The most important verified media locations include The Washington Post, The Guardian, Townsquare and the Dow Jones Media Group.

The team behind BAT

The company behind BAT, Brave Software, was founded by Brendan Eich and Brian Bondy. Eich is CEO of the company and a developer icon. He developed JavaScript, co-founded Mozilla and was instrumental in the development of the Firefox browser. Bondy is the company’s CTO and is an experienced engineer who worked at Mozilla as a senior software engineer.

Is it worth investing in BAT?

Beginning in October 2018, the Basic Attention Token (BAT) began to receive increased attention thanks to the inclusion of the token at Coinbase. Since then, BAT has been on the radar of many investors and companies. This is no wonder, as the project is revolutionary in many respects, already has good user numbers and a very strong team (especially with Brendan Eich).

Although the Brave Browser and BAT is a better alternative to the traditional online advertising system, building a competitive system, especially the competition from Google, will be extremely challenging. In this respect, the further development of the promising project remains to be seen.

If you would like to learn more about the current BAT course, we also recommend our Basic Attention Token price overview.

A short and concise summary can also be found in the following video.