Within the Bitcoin developer community it has been difficult for many years to find a common consensus on the further development of Bitcoin. These disputes culminated with the Bitcoin Cash Hard Fork in August 2017, when Bitcoin (BTC) experienced its first hard fork. The origin of this hard fork lay in the question of how Bitcoin should be scaled. While one half of the community wanted to scale off-chain, the other side gave, which wanted to increase the block size.

As the Bitcoin Gold Hard Fork showed, there were other reasons for a hard fork from Bitcoin. From the end of 2017 to the beginning of 2018 over 20 different hard forks followed, including Super Bitcoin, Bitcoin Platinum, Bitcoin Cash Plus, Bitcoin Uranium, Bitcoin Silver, Bitcoin Diamond and Bitcoin God. At present, however, very few of them still play a role. The majority of hard forks turned out to be scams whose developers wanted to benefit from the name “Bitcoin”.

However, Bitcoin Gold (BTG) has held its ground and currently ranks among the top 25 crypto currencies by market capital. The current Bitcoin Gold price can be checked here. If you want to check the courses of Bitcoin, Ethereum, XRP, IOTA or other Altcoins, have a look at our course overview.

What is Bitcoin Gold?

As we have already described, Bitcoin Gold is a hard fork of the original Bitcoin. A hard fork is essentially a change in the source code of the software after no common consensus can be found on a change, resulting in two separate versions of a block chain. In the case of BTG, the developers took the source code from Bitcoin (BTC) and modified it according to their requirements.

It is important to know that both blockchains share a common transaction history until the hard fork. This explains why Bitcoin owners received an equivalent amount of Bitcoin Cash (BCH) or Bitcoin Gold (BTG) on Hard Fork Day.

The Bitcoin Gold Hard Fork took place on 24 October 2017 at block number 491.408. The declared purpose of Bitcoin Gold is to “make Bitcoin decentralized again”. Decentralization refers to the way Bitcoin Mining works today. To explain the reason, we have to go back a little in history.

In the early days of Bitcoin, when the crypto currency was invented by Sataoshi Nakamoto, it was possible to mine Bitcoin with a universal home computer. But when it turned out that Bitcoin had a true value, an arms race began.

First, powerful graphics cards (GPUs) were used to gain an advantage in mining. Shortly afterwards the first ASICs followed. A mining industry was formed and companies were set up which dealt solely with the mining of Bitcoin. Since then, virtually all individuals have been forced out of Bitcoin mining because it was no longer lucrative for them to mine.

From the point of view of many critics, however, this contradicts the decentralized nature and led to a centralization of Bitcoin, since a few key players now control the hashrate of the Bitcoin network. For this reason there was the Bitcoin Gold Hard Fork. By exchanging the mining algorithm from SHA-256 to Equihash, Bitcoin Gold locks ASICs out of the new network and enables mining on popular GPUs again.

The main technical reason is simply that Equihash is a more memory intensive algorithm that uses more memory than pure processing power, so there were no ASIC miners initially. However, Bitmain managed to develop an Equihash ASIC Miner in summer 2018. On July 03, 2018, Bitcoin Gold therefore completed a network upgrade to maintain ASIC resistance.

Besides Equihash, Bitcoin Gold offers only few differences to the original Bitcoin. Most parameters are identical to BTC. Bitcoin Gold also has a block time of 10 minutes and a maximum bid of 21 million. Only in the “Difficulty Adjustment”, which is done with each block at Bitcoin Gold, there is another essential difference.

The founders of Bitcoin Gold

As outlined in their white paper, the Bitcoin Gold Team came together as a community led project to revive the original vision of Satoshi Nakamoto:

Satoshi Nakamoto’s idealistic vision of “one CPU one vote” has been replaced by a reality in which the manufacture and distribution of mining equipment is dominated by a very small number of companies, some of which have used abusive practices against individual miners and the Bitcoin network as a whole. Bitcoin Gold will provide a new opportunity for countless people around the world to participate in the mining process with widely available consumer hardware manufactured and distributed by reputable mainstream companies.

Especially at the beginning, when Bitcoin Bitcoin Gold was first announced in July 2017, there was little information about the founders and the project itself. As a result, Bitcoin Gold quickly came under fire.

In addition, there may have been some criticism because the Bitcoin community was fed up with the fact that there was going to be another Bitcoin Hard Fork. In 2017 many developers and early adopters had the chance to profit from the name “Bitcoin” and earn fast money with a hard fork.

Bitcoin Gold also had to fight these accusations. The fact that the BTG team carried out a ‘pre-mine’, which was actually a ‘post-mine’, was not particularly conducive. The team had mined 8,000 blocks of 12.5 BTG each (100,000 BTG in total) between the date of the snapshot (the hard fork) and the public mining start. This “post-mine” led to controversy.

However, as it turned out later, 95% of the previously mined Bitcoin gold was donated to a foundation, which is responsible for the development of the project. Only 5% was distributed to the six founders. Understandably, a lot of attention was paid to the 5% that were included in the roadmap as the “initial reward for the core team”.

According to the roadmap of Bitcoin Gold website, the crypto currency pursues ambitious plans for the future. Contrary to the chart, no Lightning network had been integrated by the time of writing (October 2018). 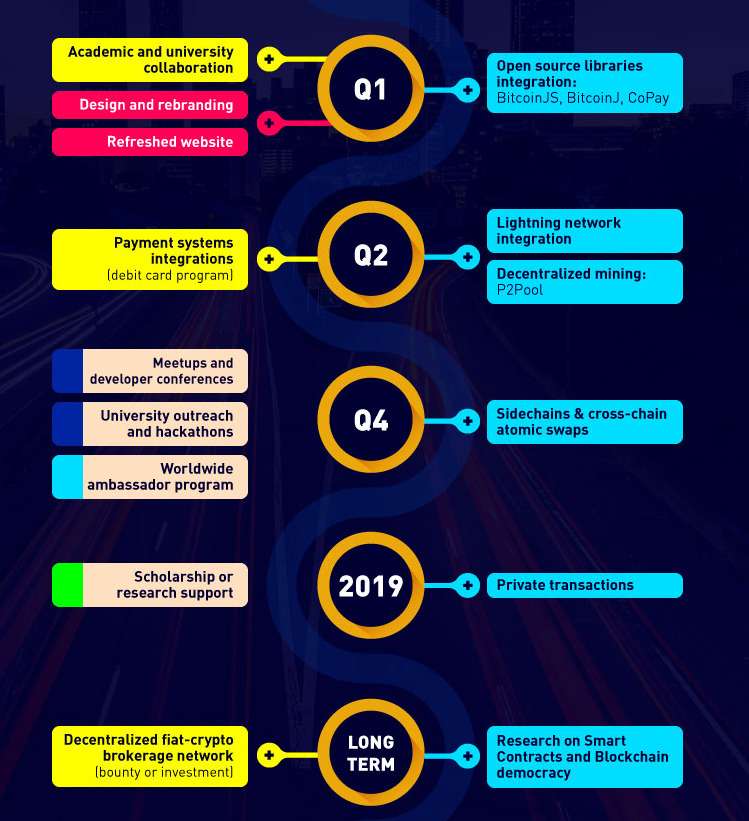