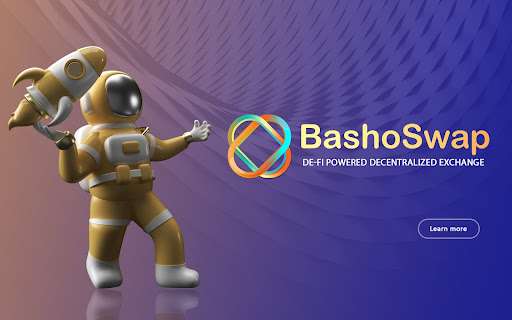 Important information: This is a sponsored story. Please remember that the value of investments, and any income from them, can fall as well as rise so you could get back less than you invest. If you are unsure of the suitability of your investment please seek advice. Tax rules can change and the value of any benefits depends on individual circumstances.

The Alonzo hard fork has allowed the Cardano ($ADA) network to run smart contracts and effectively compete with other networks including Ethereum, Avalanche, and the BNB Chain. The hard fork led to a flurry of activity on Cardano and the launch of numerous decentralized finance (DeFi) projects.

Despite the flurry of activity so far no DeFi project has taken the lead on Cardano and other blue-chip projects haven’t yet launched on the Cardano network. Enter BashoSwap, an automated market maker (AMM) and an initial decentralized offering (IDO) launchpad launching to cover the gap.

The AMM platform leverages the Cardano blockchain to enable lightning-fast trades between Cardano native tokens and to have shared liquidity among a number of other features. Transaction fees on Cardano are significantly lower than they are on other platforms, it’s worth noting.

The team behind BashoSwap is also looking to create version 2 of its swap protocol which will include a single token pool model. That model will be achieved by grouping deposited Cardano native tokens into a virtual pair with the Basho Virtual USD stablecoin ($BSUSD), instead of using liquidity pairs.

This liquidity pool will lead to lower trading fees and the need for less capital being deposited for Liquidity Providers. New projects will effectively be able to launch on BashoSwap with zero capital.

On top of that, through a two-tiered liquidity pool design on its AMM, BashoSwap is able to provide users safeguards against malicious token listings and rug pools, in which developers behind projects remove all liquidity from a protocol to render its tokens worthless.

The protocol isn’t just another AMM, but instead includes a number of features that help it become a one-stop-shop on the Cardano blockchain. These include a Launchpad for Cardano-based projects, designed to leverage smart contracts on the network to offer a transparent, efficient, and fully decentralized fundraising platform.

Through BashoSwap’s decentralized exchange users can trade between $ADA and Cardano native tokens, while its automated market maker protocol ensures traders can swap and trade native tokens in a permissionless manner.

To create a trustless environment for the decentralized exchange, BashoSwap follows the EUTXO protocol that guarantees that if all participants agree, a transaction can occur.

At the heart of BashoSwap is the $BASH token, which has a number of use cases within the platform. The tokens were distributed through a private sale and will play a role in the protocol’s future once it moves to a Decentralized Autonomous Organization (DAO).

Staking $BASH will allow holders to vote on governance proposals and participate in the future of the protocol through their votes.

How to own $Bash Token?

To join in the BashoSwap sale you will need a Cardano wallet. Hence, set up one of the following wallets: Yoroi Wallet, Daedalus & Nami wallet which are one-stop solutions for all your Cardano transaction needs. The simple steps of setting up one and buying $Bash Tokens can be found in the Docs section of the website.