With nearly $40 billion in Total Value Locked (TVL), competitors are piling in to take a slice of the DeFi market. VeChain could soon enter the race and introduce one of the most widely used decentralized applications on Ethereum, Uniswap, with its own version on the VeChainThor blockchain.

In a post on the Telegram channel of the VeChain developer community, an anonymous developer known as “A Byte Ahead”, and “Laalaguer” on GitHub confirmed the news. The decentralized exchange on VeChain will be called Vexchange. It is a fork of the second iteration of Uniswap and is currently in its testing phase.

“A Byte Ahead” stated that they are aware that the high fees on Ethereum have left a gap that can be filled by a less expensive alternative. However, developing the Uniswap clone is difficult, the developer added:

Previously we are not confident to announce it because the “porting Uniswap V2” is hard. But now we have done the contracts part and Kenneth have partially get the Uni-interface working on Connex2. It’s on a good, correct, and right path.

Vexchange will feature the synthetic token vVet that operates as a “wrapped” version of VET. In addition, as the image below shows, there are contracts for a liquidity pool of the vVET/VTHO pair and a version of the Factory contract use by Uniswap to add new tokens.

The fund has already started receiving liquidity, as part of the testing phase. During 2020, Vexchange’s trading volume on its testnet stood at $12,000,000, as announced by the team behind DEX. 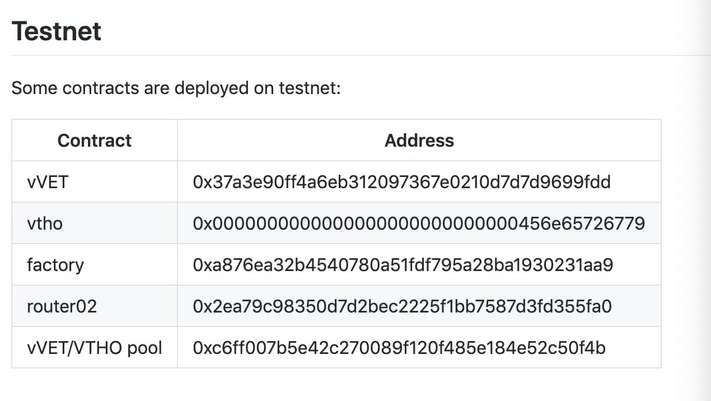 Further, the team working on Vexchange will discuss Tokenomics, work on adding more initial liquidity in the pools, on a new interface, and open-source tools.

One trend gaining more traction in the DeFi world is interoperability. That’s why the developers of this DEX will work on “a bridge” to create ports of tokens used in Ethereum that can migrate to VeChain.

Difficulties of migrating Uniswap to VeChain

At the moment, the project does not have a launch date, but via Twitter, the team has announced that they will soon publish a roadmap. Then, the public could gain a better understanding of when the deployment on the mainnet might be.

Roadmap coming soon so you all will know what we are looking to accomplish this year.

The team behind Vexchange published a document in which they point out the challenges faced in the development of the exchange. Among them, they point to issues such as the Uniswap legal license that forces any fork to be open source and internal and external incompatibilities.

These refer to some components in the source code that depend on other components on Ethereum. However, via Twitter, the team also wrote:

(One) of the biggest problems facing Vexchange is the lack of interesting tokens.$EHrT y $VTHO are doing well, but that’s about it.