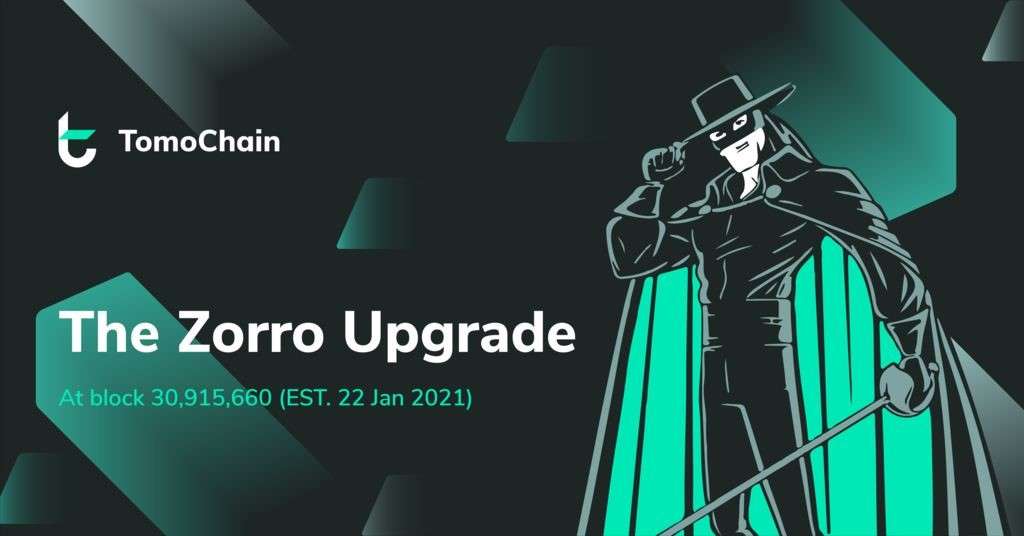 TomoChain, a Singapore-based blockchain protocol that launched its mainnet in December 2018, today announced new details about the “Zorro” network upgrade. The upgrade will be activated at block 30,915,660, and is expected to take place on January 22. The goal of Zorro is to improve the Proof of Stake blockchain with an upgraded EVM.

According to TomoChain founder and CEO Long Vuong, the implementation of Zorro is “an important milestone in the ongoing development.” Zorro will offer new features and functionalities to the community. Kyn Chaturvedi, CBDO of TomoChain further stated in a press release shared with CNF:

This upgrade will elevate TomoChain’s capabilities, making the network suited to hosting enterprise applications that can operate at scale. Making it easier for developers to build on TomoChain, through upgrading its EVM, is a vital step in realizing this goal.

Far-reaching impact on the TomoChain ecosystem

The upgrade of the Ethereum Virtual Machine will include the latest version of Solidity and allow developers to integrate code from other EVM Chains on top of TomoChain with minimal customization. As a first result of the upgrade, the LuaSwap multi-chain liquidity protocol is expected to launch on TomoChain soon.

Furthermore, Zorro is also expected to meet the technical requirements to integrate TomoChain’s layer 1 protocol Trifecta, consisting of TomoZ, TomoX and TomoP. In addition, Zorro will adjust the cancellation fee for TomoX, a DEX protocol that enables the launch of permissionless order book-based DEXs with no gas fees, near-instantaneous trades and a shared liquidity book across all decentralized exchanges.

All masternodes and full node operators are also called upon to update their software by January 22, as older TomoChain versions will be incompatible with the rest of the network once Zorro is activated. TOMO token holders do not need to do anything.

Building on this, TomoChain continues to develop Lition as a sidechain technology for commercial use cases. In addition, TomoChain recently partnered with the Vietnamese Ministry of Education, which will use blockchain to secure diplomas.