Cryptocurrencies are gradually bridging the gap from speculative to mainstream assets, with more companies holding them in their balance sheets. However, it’s mostly been Bitcoin that has seen adoption in this sector, including from Microstrategy and Tesla. TIME Magazine has expanded to the largest altcoin, becoming the first major publishing company to hold Ether on its balance sheet.

TIME is one of the world’s largest and most renowned publications. The New York City-based media giant launched almost a century ago and in that time, it has consistently stayed as a trusted bi-weekly magazine. With a circulation exceeding three million, it ranks as the second highest-circulated weekly behind People. It claims to have over 20 million weekly readers.

Now, TIME will have ETH on its balance sheet.

TY @keithgrossman for agreeing to be paid in $ETH! pic.twitter.com/MdPupSUeo0

The partnership is centered on the metaverse, an emerging sector that’s getting a lot of attention in recent weeks. TIME will partner with Galaxy to educate its readers about the rapidly-evolving sector in a new newsletter to be named “Into the Metaverse.”

The newsletter will explore how our physical and digital selves are merging in the metaverse world and engage with the visionaries leading this bold new world.

Novogratz commented, “Over the next decade, the metaverse will become an increasingly important part of the world economy; our physical and digital realities are already becoming hard to distinguish. We look forward to partnering with TIME, an iconic brand driving innovation, as we seek to bring readers, creators, and the curious into the metaverse and demystify the tremendous amount of transformation happening within.”

And as TIME promotes the metaverse, it will also take a bold step itself in accepting payments in Ethereum, and not cashing out. This will be the first time that a major publication accepts ETH.

Galaxy Digital truly understands the massive growth potential for the metaverse and Web3, and the team is playing an integral role in helping to educate the traditional world on this evolution. I am so thrilled to partner with such visionaries as we combine the power of media and the metaverse to educate our readers and trailblaze towards a more immersive virtual future.”

Earlier this year, TIME announced that it would start to accept cryptocurrencies as payment for subscriptions. In March, it further offered an exclusive series of three of its covers as NFTs at an auction.

In April, TIME partnered with Grayscale on a cryptocurrency video series. The Barry Silbert-led company paid TIME in Bitcoin and the publication pledged to keep the BTC on its balance sheet. 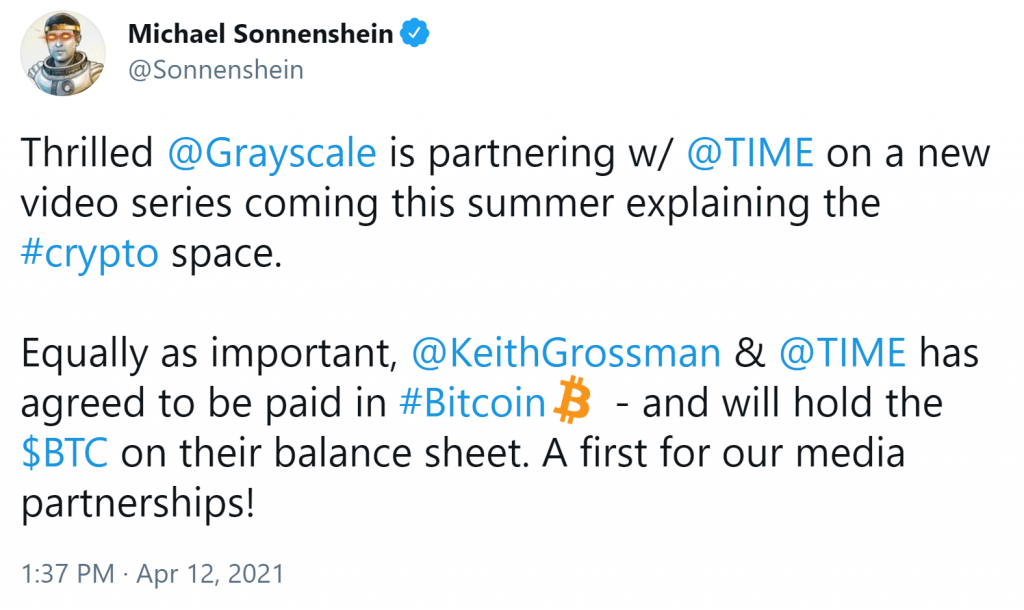 Ethereum is trading at $4,120 at press time, down 2.4 percent in the past 24 hours. It’s down 15 percent from its all-time high of $4,860 which it set a week ago. Ethereum’s downward trend is not unique with most other tokens taking a hit in the past week as the market settles after a couple of weeks shooting up.

Ethereum’s trading volume has held up quite well despite the drop in its price, an indication that investor interest hasn’t dropped. In the past 24 hours, it stood at $23.3 billion, even higher than when Ethereum was hitting its ATH a week ago.