In a series of tweets, the Head of Growth for crypto exchange Kraken, Dan Held, explored the relationship that exists between the Bitcoin price and its adoption. Held believes that the cryptocurrency had two major turning points in this regard, in 2013 and 2017.

At that time, the Bitcoin price had significant price spikes and according to Held, this was when the majority of current users joined the network. This is part of a “viral marketing loop,” or a mechanism that drives mass adoption of a product through the influx of constantly recruited users, as Held explained:

It’s through this viral loop that Bitcoin grows in adoption.

For the mainstream and users who are not yet familiar with Bitcoin, the increase in its price signals “success” – i.e., that it has managed to solve a problem and succeeds in persuading them to adopt the cryptocurrency. In that sense, Held stated that BTC would not have the current number of users if its price “had stayed at $100.”

Bitcoin is designed for mass adoption

To demonstrate that the above is part of Bitcoin’s design Held quoted Bitcoin inventor Satoshi Nakamoto, who had this to say about the network effect of the cryptocurrency:

As the number of users grows, the value per coin increases. It has the potential for a positive feedback loop; as users increase, the value goes up, which could attract more users to take advantage of the increasing value.

Next, Held showed how reducing the supply issuance for Bitcoin is a catalyst for bull markets. As the chart below shows, when Bitcoin’s inflation rate goes down with the halving, the Bitcoin price goes up. Held explained:

The idea being a reduction in supply + increase in demand = number go up. 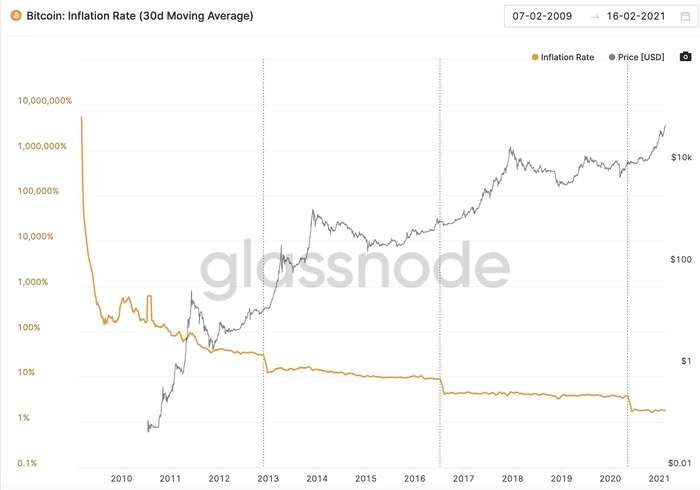 In addition, unlike other commodities, Bitcoin has a constraint on the production of its supply that disables miners to increase it and put more BTC in the market in response to increased demand, as Held further elaborated:

This means that no more Bitcoin are produced as demand for it increases. With gold or oil, they can be sourced from increasingly more expensive/difficult places when demand.

In recent months, the number of Bitcoin users has seen a significant increase. Kraken’s Head of Growth shared the image below showing the number of users on Coinbase to show the price/adoption ratio.

Other metrics show similar results: funding to new Bitcoin-related businesses and services has increased; trading volume shows a rise in liquidity which attracts more traders; Bitcoin Core developers have had increased activity due to corporate sponsorship; the hash rate has grown while the network has the incentives for more miners to continue to increase it. Kraken’s Head of Growth concluded:

Bitcoin’s price is the singular function that enables Bitcoin to grow in user adoption, liquidity, funding, security, and core development.

It is the most important aspect of Bitcoin. Don’t let anyone tell you otherwise.