Money was created to fulfill an exchange function. In the past, there were different means of exchange at different times, which were used depending on the prevailing government. Whether pearls or shells, whiskey, cigarettes or gold bars, all these limited resources could be used as means of payment.

Many economists criticize the current financial system because fiat currencies no longer have any equivalent value, but are legitimized solely by people’s trust and the law. The US monetary system was backed by gold until 1971 and the country’s central bank, the Federal Reserve, was only allowed to print as much money as there was gold in its own storage facilities.

However, since Richard Nixon lifted the dollar’s peg to gold, the FED was empowered to print as much money as it deemed necessary to maintain price stability and stimulate the markets sufficiently. This leads to a steady devaluation of the US dollar, the more money the FED prints and floats on the market.

Since then, inflation has been unstoppable and is gradually showing the real consequences of cheap money in abundance. Negative interest rates, a creeping expropriation of savers or even zombie companies that are only kept alive by cheap money are only some of the superficial consequences of this financial policy.

Bitcoin was created in 2009, by an unknown developer named Satoshi Nakamoto. The maximum total amount of Bitcoin circulating is limited to 21 million BTC, which is of course a limit. It is not possible to bring more Bitcoins than this upper limit onto the market. This limitation is the first advantage over Fiat currencies.

Furthermore, Bitcoin cannot be generated at the push of a button by a simple booking record without a corresponding equivalent value. Bitcoins are created by mining and thus solving complex computational tasks. The miners around the world compete to see who can solve a complex arithmetical problem first and receive a reward, the Mining Reward.

The price of Bitcoin is very volatile, but there is no creeping inflation that would lead to expropriation among savers who are trying hard to earn interest on their assets. Although leading economists criticize that Bitcoin cannot serve as a store of value, as price fluctuations of a thousand USD can happen within a few days, current developments in poorer countries paint a completely different picture.

The citizens of developing countries such as Argentina, Hong Kong or Venezuela have fled with their capital in Bitcoin in the hope of protecting their remaining savings from inflation and a further devaluation of their national currencies. The demand for Bitcoin and other cryptocurrencies is growing, especially in crisis countries struggling with a sharp devaluation of Fiat money. The following figure shows that the trading volume of Bitcoin in the countries mentioned above is increasing strongly. 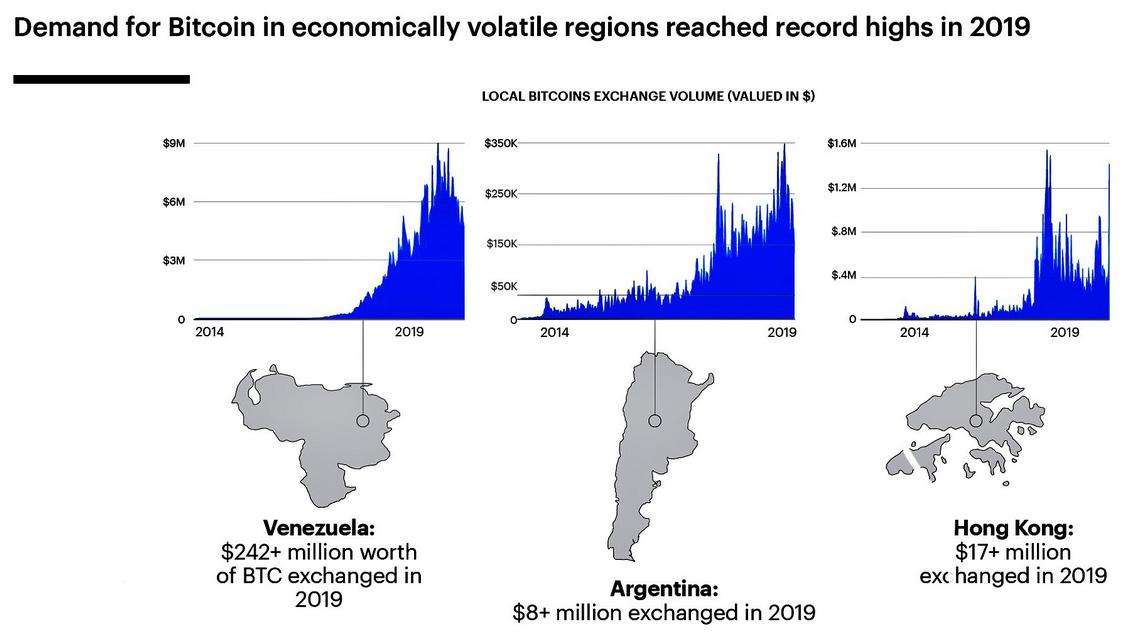 The Central Bank of Argentina was even forced to take extreme measures and forbade its citizens to spend more than 200 USD per month. Such measures only represent the peak of the iceberg, as the national debt has led to dizzying sums worldwide if current monetary policy is continued. The national debt of the United States amounts to almost USD 23 trillion and has thus reached a new all-time high.

The Federal Reserve recently announced that it would pump USD 425 billion into the market in order to ensure price stability and save the USA from a financial crash. Such financial injections lead to a further devaluation of money and thus to a dwindling purchasing power of the normal citizen. The prices of products rise, the value of money falls, it is a never-ending cycle that is kept alive by current fiscal policy.

Other advantages of Bitcoin over Fiat currencies

Sending USD from the United States to Canada can take several days. Furthermore, this usually involves disproportionately high costs. For a transfer of 500 USD, there is an average transaction fee of 20 USD, which is disproportionate to the amount transferred.

Bitcoin can be sent quickly and at low cost from anywhere in the world with an Internet connection. Although there has also been a “jam” in the Bitcoin Blockchain in the past, these scaling problems will be solved in the long term with the Lightning network. Another disadvantage is the conversion of foreign currency into the local Fiat currency.

Banks also charge fees for this, although all these processes are automatically handled electronically. The adaptation of Bitcoin is also progressing further, so that more and more companies are offering the option of paying for goods and services with Bitcoin.

The “Swiss Amazon” Digitec and Galaxus is the largest online retailer in Switzerland with annual sales of 992 million Swiss francs. Earlier this year, the company announced that Bitcoin was immediately introduced as a legal tender. This development continues to progress, so that further heavyweights in the industry will follow.

A study by SEMrush has shown that Bitcoin is used more often in Italy as a means of payment than American Express or the credit card. In June 2019, Bitcoin achieved a record 368,000 purchases using BTC as a payment method. The online magazine “La Stampa” further states that Bitcoin was also viewed with great skepticism in Italy several years ago.

The confidence of the general population in Bitcoin, a decentralized non-government controlled payment method, continues to grow every day. Points of acceptance are growing and new laws for the classification of crypto currencies are being introduced. On December 20, 2019, US Congressman Paul Gosar submitted a bill entitled “Crypto-Currency Act of 2020” to the House of Representatives.

This bill is intended to regulate the classification and classification of crypto-currencies in the United States. In addition, new regulations will come into force in Germany, which will place the custody service of crypto-currencies under German financial supervision. These developments show that digital assets such as Bitcoin are also attracting attention from politicians and are becoming part of the current discussion.

Whether Bitcoin will actually replace Fiat currencies one day, however, remains to be seen for the time being.