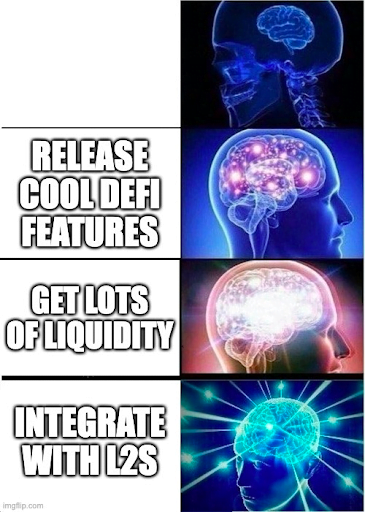 Partnerships in the blockchain arena are critically important to the success of the entire industry. That’s because the more users that are onboarded and the more awareness that the protocols bring, the faster the industry reaches a state of mass adoption. However, they are also critical to the individual protocols too. The more impressive the blockchain a protocol sits on, the more users and liquidity across that network, the bigger the pool of users that the protocol can reach. And by the same token (literally), a protocol can strive for as many integrations as possible across chains, as collaborations become the focus of the protocols going into 2022.

In the crypto realm, just like in the real world, everyone is trying to monetize. The users are trying to monetize by trading, and investing in the cryptos themselves, as well as by staking and pooling their holdings in return for yield. The projects, of course, are selling their protocols and through that their tokens based on the strength and utility of the underlying protocols. The greater the projects do, the higher the demand for their tokens and the higher their tokens value soars.

Decentralized exchanges are competing to list the tokens of these protocols, and to draw in users to buy, sell, trade and pool their tokens in that exchange. The blockchains are competing to have as much locked in value and as many projects based on their chains as possible.

But for the DeFi protocols themselves, the battle is particularly fierce, as they race to do deals with the chains, in order to guarantee as much possible TVL as compared to the other protocols that come after them.

The chains themselves have their own crosses to bear, with Ethereum scrambling to catch up to other Proof of Stake chains that have outrun them. Protocols then choose to build on the competitor chain, and more chains work towards being Ethereum Killers. Although Ethereum still has many advantages.

On the other hand, Cardano, which was born out of a disagreement between Vitalik Buterin and Charles Hosikson was meant to be the Ethereum Killer. But it moved too slow and as such only launched smart contracts recently, whole Ethereum launched them way back in 2015, giving Ethereum capabilities that the other chains at the time just did not have and earning it its high token value today.

Ethereum currently has over 344 protocols sitting on it, as the busiest chain, BSC boasts 213 protocols, Polygon hosts 135 and in terms of TVL, Ethereum soars ahead of the rest of the pack with  $164b TVL and BSC is in number 2 place with just a mere $13b, which doesn’t sound like a lot when compared to Ethereum.,

So What Does it Take to Get There?

Now protocols are literally fighting over integrations with Layer 2 chains, and collaborations with blockchain networks, rather than focusing their efforts on the user. SushiSwap is available through 11 different blockchains, and with countless integrations with Layer 2 chains, taking the lead, and Balancer is not too far behind. Balancer introduces a new generation of DeFi, a blockchain and platform, which introduces Smart Pools, dynamic liquidity pools with parameters that can be changed through smart contract coding, allowing pool creators to choose who can join their pool.

Based on Polygon, Ethereum and the much-lauded Arbitrum, and boasting over 50 DeFi integrations, Balancer has found a way to offer as much cross chain interoperability of its protocol as possible, allowing users to create their own liquidity pools across a huge selection of assets. By building an app or project on a chain like Balancer, this gives the teams capabilities to offer a wide selection of assets both Ethereum, and outside of it.

In 2022 the fight will not be for the number of users of a protocol on board, but the number of integrations across protocols, in order to open up its product to as many people as possible.