Bitcoin’s price has taken on a new momentum and has overcome the psychologically important resistance at $20,000, while possible announcements from the Federal Reserve, whale activity, and the financial derivatives market appear to be behind the rally.

As trader Michaël van de Poppe noted before the breach of $20,000, Bitcoin was struggling with this crucial level around the all-time high for the fourth time in recent weeks. According to him, the clear break of $20,200 could mean that there is a further increase in selling pressure.

Moreover, he sets the new support level at $19,400 in case of a new pullback. As the chart below shows, according to van de Poppe, the Bitcoin could rise to $21,000 in the short term if the price manages to maintain the current level.

For the trader CryptoHamster, the price of Bitcoin has formed an ascending triangle that indicates a continuation of the bullish trend. Targeting $22,000 to $23,000, the trader also advises caution if the price does not manage to consolidate at current levels. 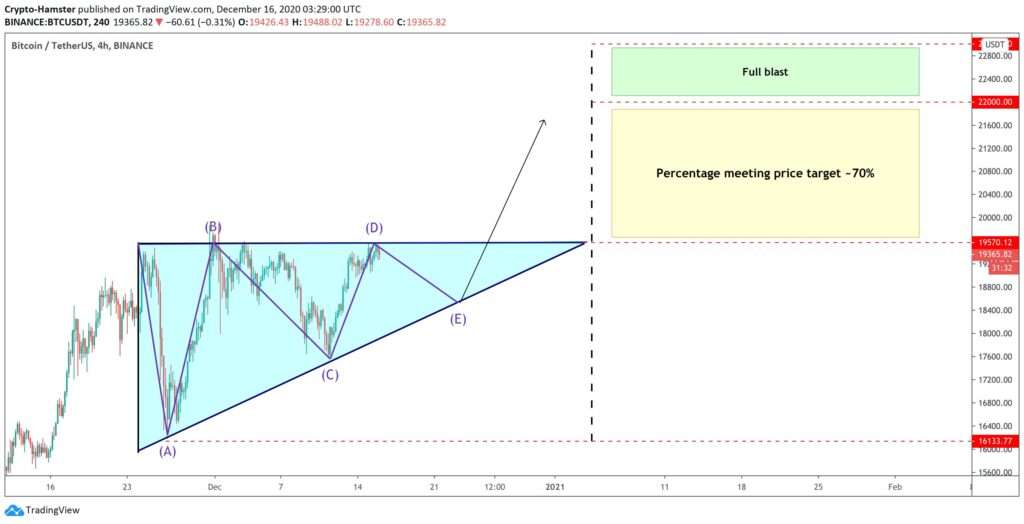 According to investor Mira Christanto, there is only a 10 BTC sell-wall in the current price range. Therefore, she believes that “bears have capitulated” and that things will “go nuts”. Accordingly, Blockstream CEO Adam Back has reviewed the order book on the Bitfinex exchange and concludes that there are high levels of trading volume between $21,000 and $25,000. Beyond those levels, there are no sell orders for Bitcoin.

Was the Federal Reserve the key trigger or FOMO?

As reported by CNF, the U.S. Federal Reserve will make economic announcements during the day about the Federal Open Market Committee (FOMC) meeting. In the past, these announcements have been extremely bullish for Bitcoin, underlining the value proposition as store of value.

The institution is expected to clarify what the next steps will be with respect to its large-scale bond-buying program. However, as the CFO for the firm Janney, Guy LeBas, has indicated it is likely that the Federal Reserve will not take any drastic action and will maintain many of the measures it has implemented through 2020. LeBas said:

Anyway, the crypto community have been celebrating the new all-time high, comparing the current bull market to that of 2017. Exactly 3 years ago, on December 16, Bitcoin reached its old all-time high. This time, however, everything seems to be different from three years ago. Above all, the participation of institutional investors and the economic situation worldwide speak for a further rally of Bitcoin.