Bitcoin is moving sideways right now, after the heavy fall last Sunday. The 20- and 50-period Exponential Moving Averages could produce a bearish crossover in the short term, having lost support for the ascending wedge.

Ethereum appears to be losing strength in its rally, and Tron is starting to turn bullish and could be one of the ones with the most valuable coins in the coming weeks. 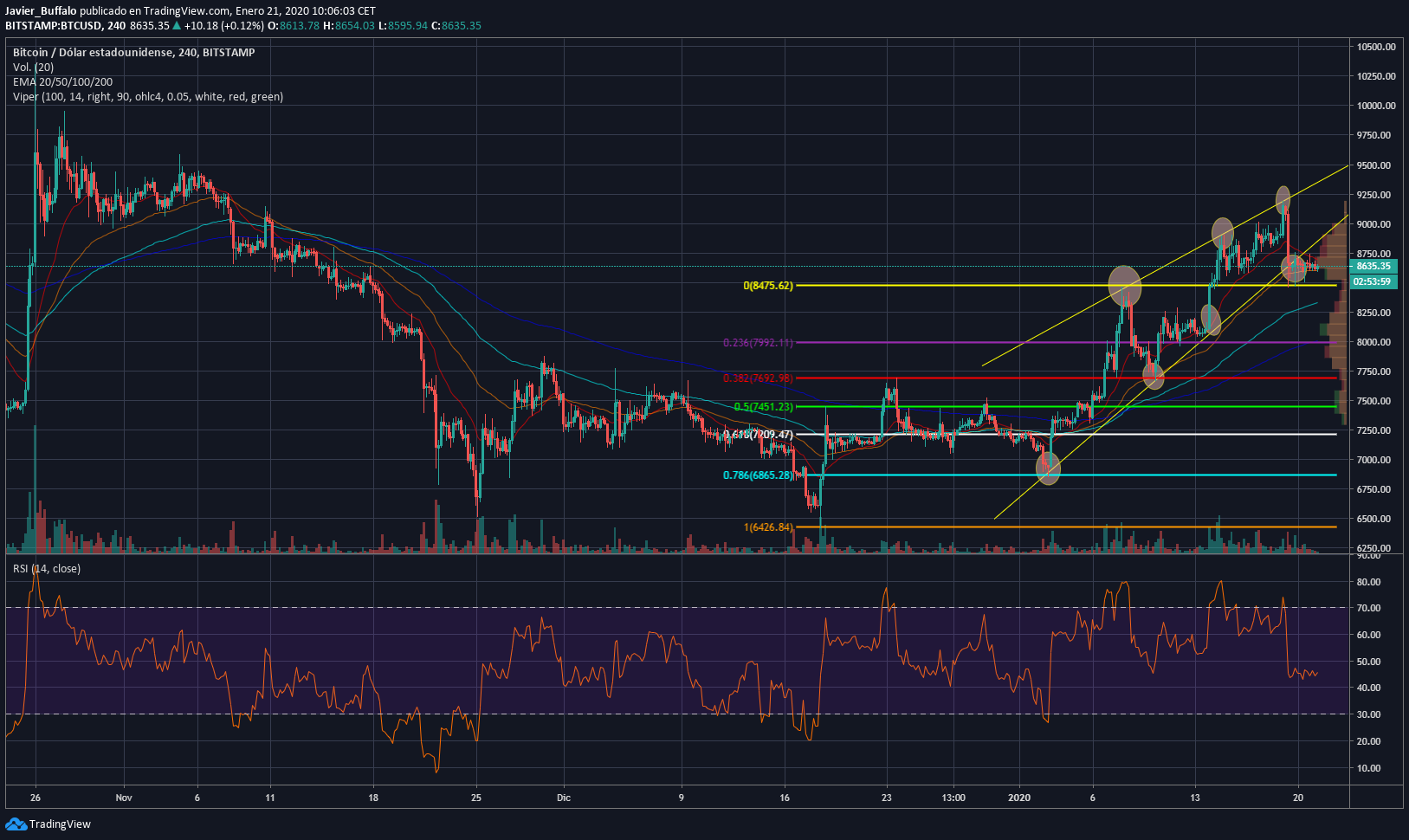 Bitcoin has found strong resistance in the $9,200 range, bears have caused a sharp drop in the price to $8,600, where it seems to be consolidating right now, not forgetting that the price has lost the support of the wedge, and its implications may be bearish in the short term.

However, the price has found support close to $8,500, earlier this year’s high, before initiating a correction up to the Fibonacci retracement 38.2% ($7,700). The wicks in the candle closure can be interpreted as a sign of strength of the bulls, which would be sending a warning to the bears, and the breakage of the wedge could mean a bear trap.

It is difficult to interpret the next big step of Bitcoin, the RSI is in a neutral zone, and the price is moving between the 20 and 50 period Exponential Moving Averages, if the averages continue to narrow, a downward crossing could imply a further drop of Bitcoin. However, the chart and indicators also leave open the possibility of a bullish reversal, by the hand of the already famous Bart Simpson (inverted) pattern that could catapult the price back to $9,200.

Therefore, with this information, we recommend caution at the moment when trading Bitcoin. 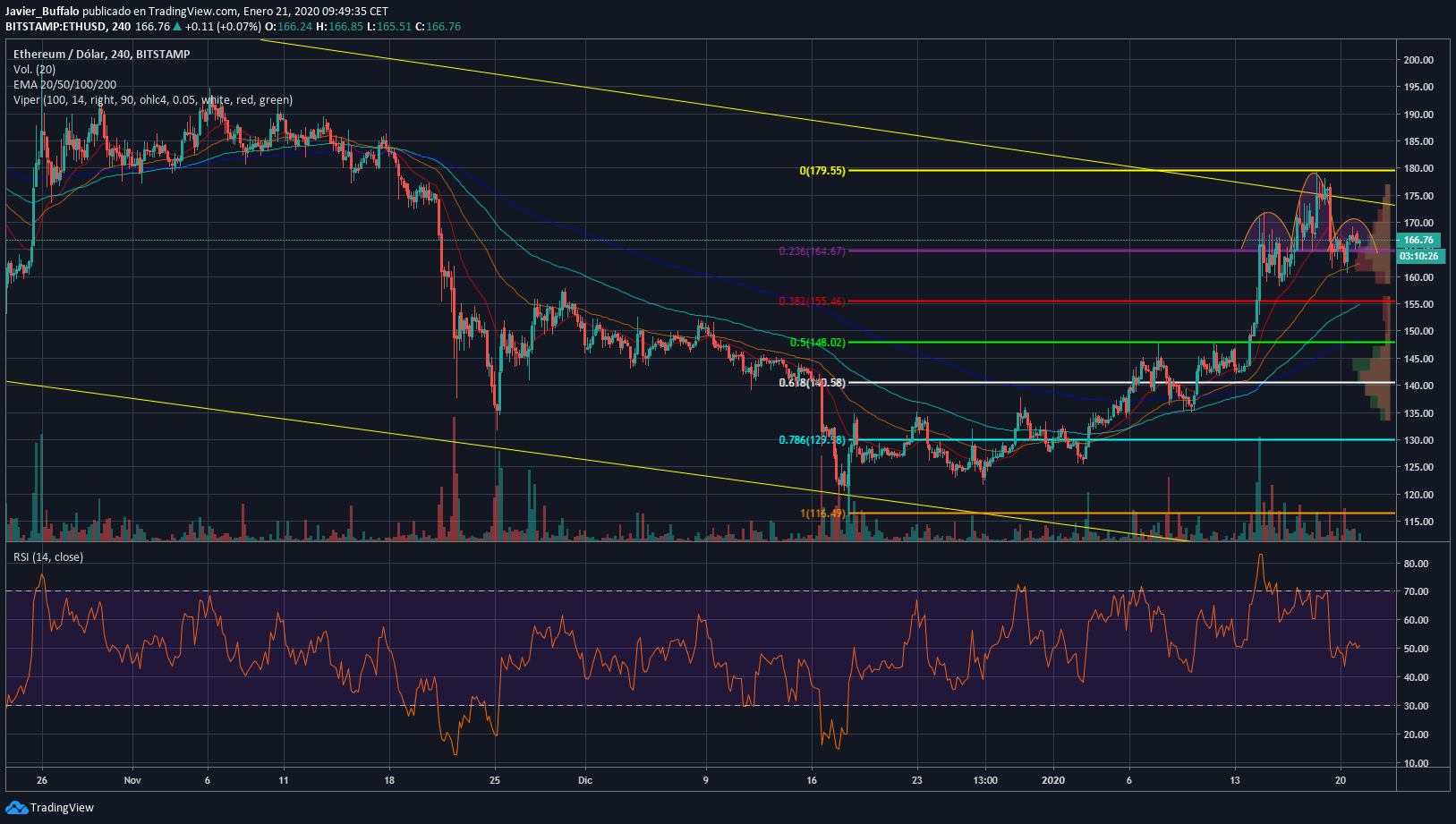 For Ethereum we are starting to see a depletion of buyers, and a figure of shoulder – head – shoulder could be forming on the 4-hour chart, a pattern that is usually trend-shifting, although sometimes it can also be given as a continuation of the main trend.

Seeing other indicators and the volume profile, it is not disposable that Ethereum starts a higher-grade correction, until the Fibonacci 61.8% retracement ($140), where we would find strong support, as the volume profile shows. However, the $155 can also be a foothold for buyers, as it could bounce off the 100-period EMA and would match the fibo 38.2% rollback.

It should also be noted that Ethereum’s most long-term trend at the moment remains bearish, as it has failed to break the downstream channel on which it has been moving since mid-2019. The volume break of this channel is essential for a long-term bullish scenario, as well as breaking this year’s highest score, at around $180.

Perhaps the most realistic option right now is to wait for confirmation of the H-C-H, or wait for the downstream channel to break with strong buyer volume, for a long entry in Ethereum. 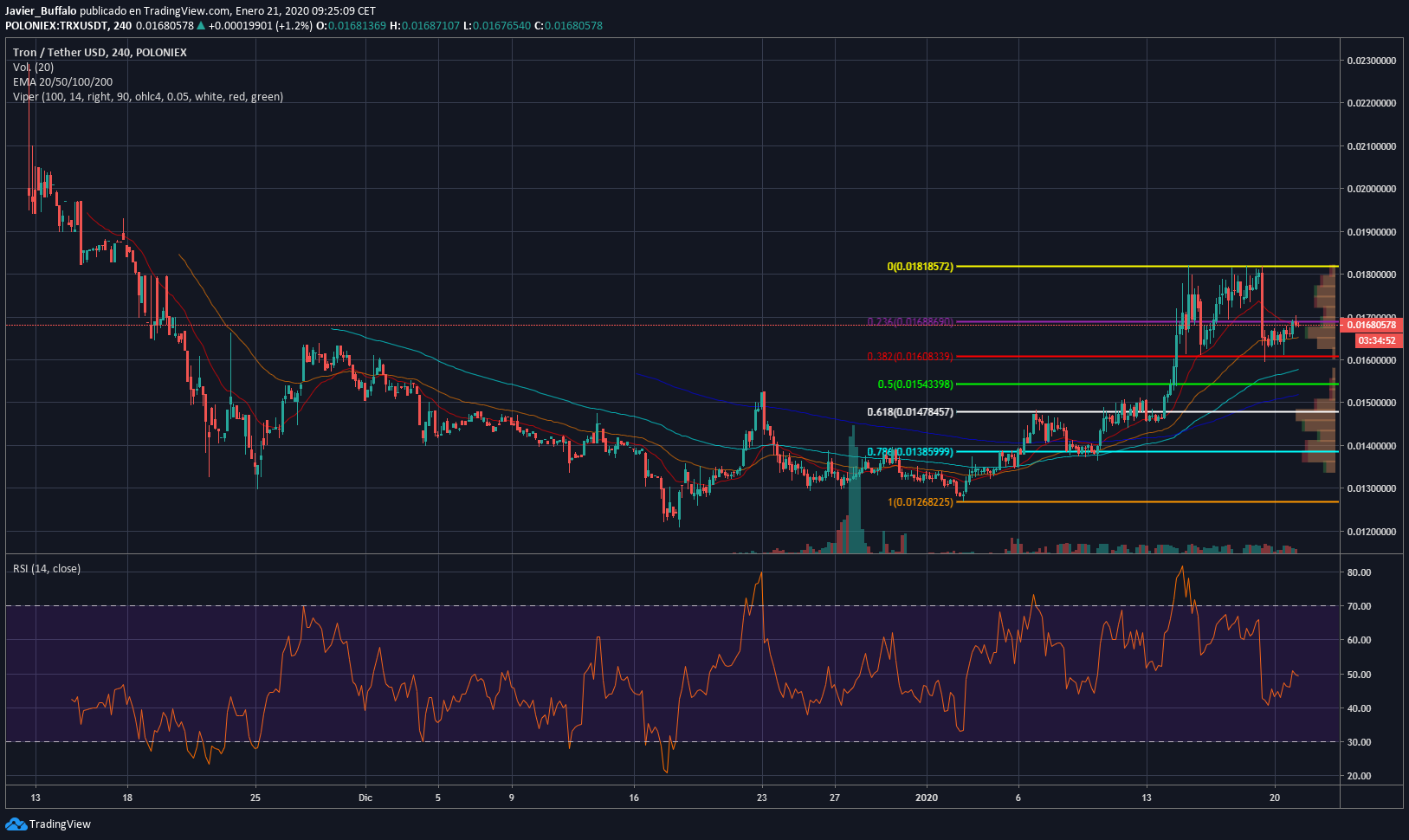 TRON is at an early time, as reflected by the strong volume inflow earlier this year, motivated, not only by its CEO’s tweets, but by the presumptive approach of launching DeFi projects on its mainnet, such as DeLoan.

The price has found a tough resistance in the range of $0.018, we appreciate a significant level of rejection for the wicks in the closing of the candles. The price seems to have found a support level in the Fibonacci 38.2% retracement of its last rise ($0.016), which could invite a long entry with a target up to $0.020. Nor is a deeper retracement to the Fibonacci level 61.8% ($0.0147) disposable, where we see an important level of support, as the volume profile shows.

The RSI is in a neutral zone (50 points) but making a transition to the bearish zone. The fastest Exponential Moving Averages (20 and 50 periods) still keep the price within the uprange, so unless there is a break from the EMA 50, we see no sign of a further recoil at this time.

In conclusion, we see Tron strong at this start of the year, with fundamentals that could accompany a larger rally, and we are optimistic that it can reach $0.020 in the short term. However, a $0.0147 support break could involve a bearish scenario and a throwback to year-start levels.