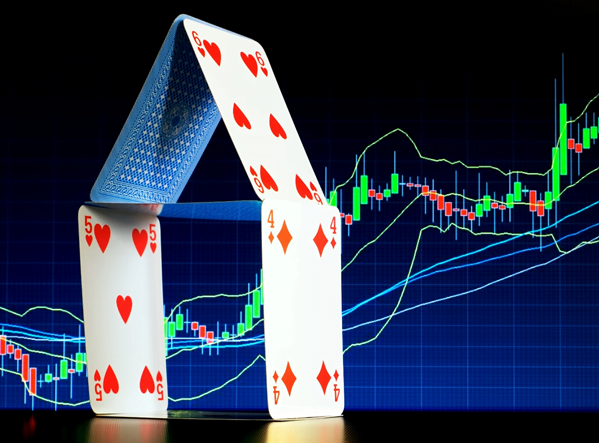 When the market turns red and cryptos crash, a flight to safe haven assets is inevitable. So far the greatest beneficiaries of this trend have been stablecoins, whose issuance and trade volume have ballooned as the coronavirus has wreaked havoc on the global economy. Stablecoin supply has rocketed in the last week, with hundreds of millions of dollars of USDT and USDC minted to meet demand. The trend has prompted crypto commenter Nic Carter to speculate that the $6.5 billion stablecoin market cap could soar to $100B within a year.

The fact that so many traders have chosen to stay in stablecoins rather than temporarily exit the cryptoconomy altogether could be bullish for bitcoin, suggesting that the current downturn is seen as a buying opportunity rather than evidence that cryptocurrencies are fundamentally broken. In the meantime, however, stablecoins are attracting scrutiny for their inability to serve as a store of value.

“The name stablecoin is misleading,” opines Ido Sadeh Man, founder and chairman of Saga.org. He’s adamant that stablecoins are not stable at all. “If you think pumping your assets into stablecoins means they are better protected than if they were held in a single currency bank account, not only are you wrong, you’re running from one burning house into another.”

The Slow Burn of Stablecoins

Man’s assertion, that stablecoins are a poor man’s shelter during times of extreme volatility, is borne out by the performance of the cryptoconomy’s leading stablecoins over the past week. Crypto-collateralized stablecoins, primarily MakerDAO’s SAI and DAI, have been particularly badly hit, wavering from their dollar peg due to instability in the system that governs their issuance and liquidation.

But there’s more to stablecoin stability than an inability to maintain a fixed peg against fiat currencies: there’s also the performance of the underlying currencies themselves. As part of the team behind Saga’s SGA, a crypto asset backed by the IMF’s SDR basket of currencies, Ido Sadeh Man knows more than most about the fluctuation of fiat, and the dangers of entrusting your net worth to any single nation’s currency.

All fiat currencies suffer from volatility when measured against one another, a fact which can be seen in the performance of SDR against USD over the past few weeks. The dollar is down, and this despite SDR including a 42% weighting of USD. Were it not included in the Special Drawing Reserve, SDR’s gains against USD would be greater still. The US dollar is far less volatile than the currencies of smaller nation states. But if USD can be buffeted by freak global events, like the ones that have unfolded over the past two months, what hope for other fiat currencies, and their crypto counterparts – stablecoins – of retaining value?

Safe Havens Are in Short Supply

With global markets looking bleak, and the effects of the coronavirus likely to get worse before they improve, the search for safe haven assets has intensified. Assets that have traditionally held this status, such as gold, have not performed well so far, with central banks selling off gold reserves credited with dampening prices. It was a similar story during the 2008 financial crisis, when gold slumped initially, before embarking on a record-breaking rally six months later.

Investors can’t afford to sink their wealth into an asset that has the potential to plummet for months before posting signs of a recovery, and with stablecoins subject to their own flaws, there are few viable outlets for reliably storing value. “What you really want for a safe haven is something like the dollar. It’s the asset everyone rushes to during an actual crisis, because it is the most liquid asset, since it succeeded as money,” ventures crypto authority Eric Wall. “But how unfortunate isn’t it that our most liquid asset is tied to a single country?”

The solution, at least as far as stablecoin critics like Ido Sadeh Man are concerned, is to seek out low volatility currencies like Saga’s SGA, whose SDR-based fiat reserves provide a hedge against any single currency underperforming. This thesis has held up so far, with SGA proving to be one of the best performing crypto assets in recent weeks, holding up well in the face of severe downward pressure exerted on the crypto markets.

It’s too early to tell whether SGA, or another fiat basket-based cryptocurrency, could become the industry’s de facto safe haven asset. What is evident is that during times of crisis, stablecoins simply can’t cut it. If ever there were a time for an alternative, it’s now.