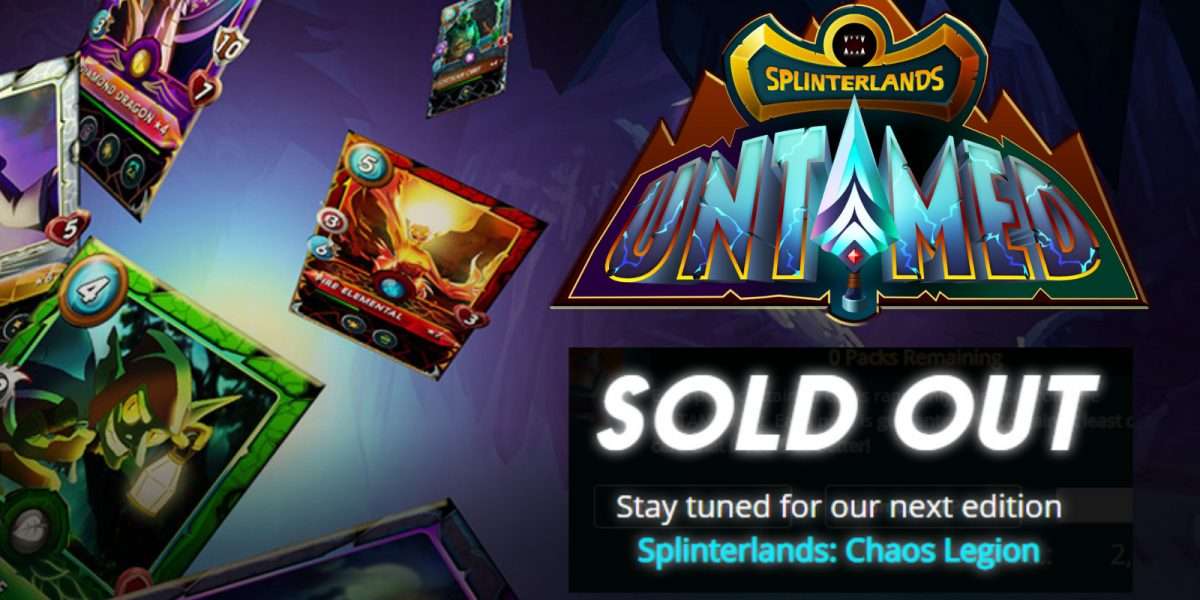 The hit blockchain-based trading card game has just sold the final booster packs from its Untamed Edition, which had a total supply of 1.5 million packs.

Media, PA, June 14, 2021 – Splinterlands, one of the most active and rewarding games in the NFT industry, sold out of its current edition of booster packs Friday, June 11th after a drastically increased rate of sales over several days. Through the final 48 hours of availability, the $2 booster packs were moving at a rate of more than 2500 packs per hour.

These unopened NFT packs will still be available on Splinterlands’ third party peer-to-peer markets at Atomic Hub (WAX blockchain) and Hive-Engine (Hive blockchain), but until the game’s release of the Chaos Legion edition later this year, there will be no core booster packs sold in the Splinterlands shop. To accommodate the game’s increasing growth, it will become necessary for new players to purchase individual cards from the Splinterlands in-game marketplace or packs from the limited edition DICE series, of which nearly 150,000 still remain. Because individual cards and unopened Untamed packs are owned by players and collectors, Splinterlands will no longer be able to ensure a consistent price of $2 per pack. Instead, the values of all assets on secondary markets will be determined exclusively by the community.

The sudden sellout of Untamed booster packs quickly followed the sellout of NFT land plots in the upcoming Splinterlands land expansion. In this expansion (to be released in Q4 2021), players will be able to mint their own item and spell NFTs that will be usable in the card game. Both of these asset sellouts followed the revealing of Splinterlands’ plans to release a new governance token for the game, called Splintershards (SPS). The SPS Whitepaper includes details about the formation of an SPS decentralized autonomous organization (DAO) to allow player governance, a private token sale to new partners and promoters of the game, an airdrop to all players and collectors, implementation of a new staking system and more. The SPS token release begins in July 2021.

Founded in 2018, Splinterlands was one of the first games to use blockchain-backed NFTs as in-game assets, allowing players to easily own, trade and earn NFTs and crypto. Splinterlands has awarded millions of dollars in crypto and NFT assets to its players, and Splinterlands players have played more than 60 million total matches. The game boasts more than 600,000 blockchain transactions each day, making it one of the most active blockchain games in the world.