Ripple’s XRP will be among the worst performing cryptocurrencies in 2019, as CNF reported. Theories about why this is the case exist in all sorts of ways. However, the most popular theory is that the company Ripple, which sells XRP and currently holds well over 50 billion XRP in a escrow account, is responsible through the monthly emissions and sales.

However, as current data shows, Ripple cannot be accused of not working on the acceptance and adoption of XRP. The number of transactions and the transaction volume on Ripple’s On Demand Liquidity platform, which uses the XRP token to generate liquidity, exploded in the fourth quarter of 2019.

While only about $33 million were transferred in the third quarter, it was over $108 million in the fourth quarter, with the year having a few days left, as Twitter user H_M_X noted. Compared to the previous quarter, the transaction volume has more than tripled.

20 days (including today) to go and crush the 2019 targets! pic.twitter.com/oZeNVTcSkI

The chart above shows the cash flow of the MXN (Mexican Peso) and PHP (Philippine Peso) corridors. It clearly shows that the MXN corridor currently represents the largest volume with over $100 million of the total $108 million on the On Demand Liquidity platform.

In addition, Utility Scan’s data shows that the payment corridor US dollar to Mexican peso alone has recorded a transaction volume of USD 1.24 million in the last 24 hours, while in the other direction, MXN to USD, only USD 21,870 was transferred. For the payment corridor Australian Dollar (AUD) to US Dollar, ODL still recorded a volume of 35,256 USD in the past 24 hours, as the following chart shows. 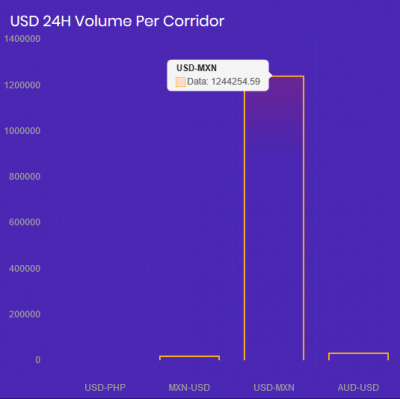 According to data on Utility Scan’s dashboard, a total of 42 ODL transactions were performed, most of which went from Bitstamp to Bitso on December 7. In mid-October, Ripple invested in the Mexican crypto exchange to enable remittances from Mexican workers to their homes via an ODL payment corridor.

Although the transaction volume of the USD-PHP payment corridor has been very low in recent hours, the corridor to the Philippine payment service provider and wallet provider Coins.ph has also risen in recent days. As H_M_X stated, the largest ODL transaction to date of 250,000 XRP to Coins.ph was carried out on 5 December.

Liquidity for the financial and banking sector

Ripple’s On-Demand Liquidity (ODL) platform promises cost savings of 40 to 60 percent and transactions completed within 3 seconds for banks and payment service providers. As Ripple does not get tired of telling, international payments require prefinanced accounts in the target currency, which is a costly endeavor for businesses and banks. ODL offers an alternative by using XRP as a source of liquidity and sending it in seconds.