XRP was temporarily back at the position of the third largest cryptocurrency. The Ripple affiliated token has managed to recover from the drop it took from the Securities and Exchange Commission’s (SEC) lawsuit.

In a week of pumps for Bitcoin and Dogecoin with events more related to the hype caused by Elon Musk as well as the infamous r/WallStreetBets group and unconnected to fundamentals, XRP has received its own boost from a community of retail investors. However, the pump did not last long. At the time of publication, XRP plunged to $0.40 after several pump groups pushed it to over $0.70.

As reported by CNF, XRP began its rally yesterday. In the style of the r/WallStreetBets Reddit group, a group of XRP investors decided to band together to push the price of XRP. As a result, the “social sentiment around XRP has seen a huge spike in the last 48 hours. According to Santiment’s data, the indicator’s value is at a 6-month-high. Santiment wrote via Twitter:

Is XRP becoming the crypto version of GME and AMC after a massive pump over the weekend? For an asset that was presumed to be on the decline since their SEC lawsuit & Coinbase delisting news, this MASSIVE pump comes after rumors of pump groups planned to do. 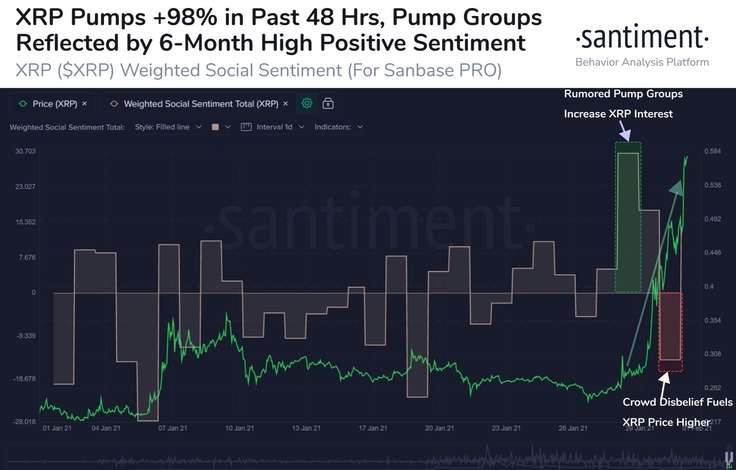 The group goes by the name “Buy and Hold XRP” and was created on January 29. In their publications, they have denied being a group to “pump and dump” XRP. On the contrary, they claim to be a community-led group, crated to spread awareness about the benefits and features of the XRP Ledger.

About 99,888 users are subscribed to the group and among the posts, there are infographics about XRP, its use cases, and ecosystem. In addition, a survey was conducted in the group in which 46,600 users participated and stated that they would start buying and holding XRP as of February 1.

The founder of the group is a community member known as “The XRP Bully”. In a video for YouTube, XRP Bully stated that the initiative would be global with an emphasis on community participation. The group’s founder added that once the price of XRP goes up, the token will not be “dumped.” The message has been replicated by other groups on social media platforms such as Instagram and Twitter.

CryptoEri, an active member of the XRP community, posted a tweet inviting investors to participate in the initiative. She also gave a message similar to the one that has resonated throughout the crypto industry in recent weeks; pro retail investors and anti-centralized entities and regulators. CryptoEri said:

Ridiculous. Those who said, “no way I’m participating” & “this is not good” yet notice their “price” tweets. Give me a break. More importantly, the freedom to do what you want with YOUR money is what rules. Never forget that. Please FRONT RUN REGULATORS and get behind DeFi.

However, not the entire community is enthusiastic about the pump group. JamesRuleXRP represented this side of the community and said that XRP doesn’t need pump, just regulatory clarity. As it turned out at the time of writing, James was to be proved right.

#xrpcommunity
DO NOT send me XRP Pump Day info…
I WILL block you.
I have been an investor in XRP for 3 1/2 years and we do not need any of this nonsense…
XRP will be adopted after regulatory clarity.

Likewise, Credible Crypto prediction has come true. Before the plunge, the trader tweeted that the cryptocurrency could see a “healthy retracement” to $0.40 before continuing its bull run.

$XRP has now fully retraced the entire drop that occurred on the date of the SEC lawsuit. Something SO MANY said wouldn't happen for months, years, or until the lawsuit was resolved. Where are all of you now? pic.twitter.com/Umdw30LUUA