The SEC’s lawsuit against Ripple continues to be the defining topic on the cryptocurrency market. While the case could potentially become the biggest regulatory event in crypto history, numerous major investors, institutions, and exchanges are already pulling the brakes prematurely.

According to data analysis service Santiment, XRP whales in particular are also drawing their conclusions from the announcement. Thus, the number of holders with more than 10 million XRP has dropped sharply since the lawsuit against Ripple was made public. On the other hand, the announcement did not affect the number of smaller XRP addresses, the analysis service notes:

he number of small $XRP addresses being created have not skipped a beat since yesterday’s #Ripple lawsuit announcement. However, the number of larger tier addresses are shrinking, with 18 less addresses with 10M+ tokens ($490k+) since the news broke.

The chart outlook for XRP is rather gloomy as a result of the massive crash of the last few days. However, as analyzed by XRP bull and technical analyst Credible Crypto, in order to stop the downtrend, it is now important for the price to close above $0.30 on the weekly chart:

You don’t make HTF decisions based on LTF PA. We went from .21 to .26 in under an hour. We have 4 days until the weekly close- that’s 4 days to get back above .30. The GREEN level is a WEEKLY level, it’s not lost until we close below it on the weekly. 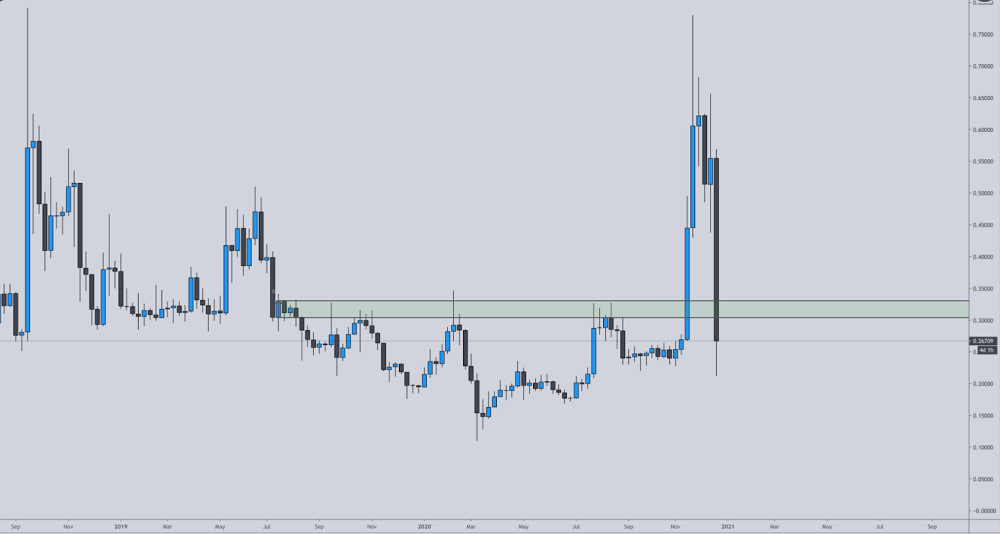 Galaxy Digital, Jump Trading and Bitwise react to the lawsuit against Ripple

One factor in XRP’s price drop could possibly be the decisions made by the three crypto investment firms, Galaxy Digital, Jump Trading and Bitwise. All three have stopped trading XRP.

Jump Trading is one of the most active firms in the crypto market and is known for its privacy as well as for providing liquidity to exchanges. As The Block is reporting based on anonymous sources, Jump Trading will no longer provide liquidity for XRP, which could be a massive blow to XRP. Without sufficient liquidity, spreads could increase, large investors could have a harder time getting in and out of large positions.

Galaxy Digital is a large New York-based crypto investment firm led by Mike Novogratz. The firm manages over $400 million in assets and will stop trading XRP for the time being. “We are not trading but will continue to evaluate as facts become available,” a Galaxy spokesperson told The Block.

Also, a big blow to the XRP market is the announcement by investment fund Bitwise. XRP made up 3.8% of the Bitwise 10 Crypto Index Fund’s portfolio. Since the fund had about $245 million in assets under management, the amount of XRP that was liquidated may have been about $9.4 million. In a press release, the company said of its decision:

The Bitwise 10 Crypto Index Fund does not invest in assets that are reasonably likely to be deemed securities under federal or state securities laws. Bitwise’s decision to liquidate its position in XRP was based on consideration of new public information from the SEC’s complaint.

So far, three rather smaller cryptocurrency exchanges – CrossTower, Beaxy and OSL – have also followed the investment firms’ decision and stopped trading XRP. However, according to Ryan Selkis, founder and CEO at Messari, other exchanges, and possibly the world’s largest crypto asset manager Grayscale, could follow suit.

WOW, that was fast.

+ Bitwise sold all XRP in its publicly traded fund
+ Grayscale likely to follow suit imminently
+ Most exchanges will follow as well pic.twitter.com/GxihKLF1YP