In a recent publication for Ripple Insights, the General Counsel of the payment solutions company, Stu Alderoty, criticized the U.S. position towards the crypto industry. Alderoty raised one of the main issues for the industry in the U.S.: lack of a clear legal framework and ambiguous regulation.

Ripple’s General Counsel recognized the work that some U.S. authorities have done for the benefit of consumers, such as the Office of the Comptroller of the Currency (OCC). This entity allowed banks to hold cryptocurrencies, which has been recognized as an important step towards their adoption.

However, Alderoty says the United States has been negligent in other respects. In terms of regulation, for example, there are no “predictable scenarios” that allow a company or entity to know exactly what the consequences of its actions will be if they decide to use cryptocurrencies. This is an innovation killer, according to Ripple’s Counsel.

In that regard, Alderoty criticized the Securities and Exchange Commission (SEC) for still not giving a clear answer as to which digital assets and cryptocurrencies are considered securities. With the exception of Bitcoin (BTC) and Ethereum (ETH), which are classified as commodities and under the jurisdiction of the Commodity Futures Trading Commission (CFTC), the regulator has had an ambiguous policy. Ripple says:

(Which digital assets are securities) The answer to that question matters significantly. Complex and burdensome securities regulations, when incorrectly applied, smother industry innovation. Imagine imposing laws meant for the transfer of Apple stock to your purchase and sale of an iPhone or, worse, to every text sent or received on your iPhone.

Bitcoin and Ethereum controlled by China?

Ripple’s CEO said that its lack of diligence in responding to the securities issue in the crypto space and the status of Bitcoin and Ethereum, put the country at a disadvantage against China. According to Alderoty, China “controls” Bitcoin and Ethereum.

Through the subsidies that the Chinese government gives to keep the Asian country’s miners connected to the network of these cryptocurrencies, the Asian giant’s mining pools get millions. Alderoty claims that China controls 65% of Bitcoin’s mining and “most of Ethereum mining”. In addition to classifying them as environmentally destructive cryptocurrencies, Alderoty says that China can “effectively block or reverse transactions” on Bitcoin’s or Ethereum’s blockchain. Alderoty added:

(The US loses technological “Cold War” with China) that is exactly what the U.S. is allowing to happen. Ceding this innovation to Communist China raises national economic and security concerns.

Ripple’s CEO, Brad Garlinghouse, has also expressed a similar position. Ripple’s CEO has called on the United States and regulators to support the crypto sector and maintain the leadership that Garlinghouse says the country has had on other technologies in the past.

A report by the Cambridge Centre for Alternative Finance supports Ripple’s General Counsel statements. According to the Cambridge Centre conclusions, as can be seen in the map below, China has a significant advantage in controlling Bitcoin’s total hash rate. However, many individual entities in China participate in the network and not a single central entity. Therefore, a block or reversal of a transaction or a 51% attack by the Chinese government seems unlikely. 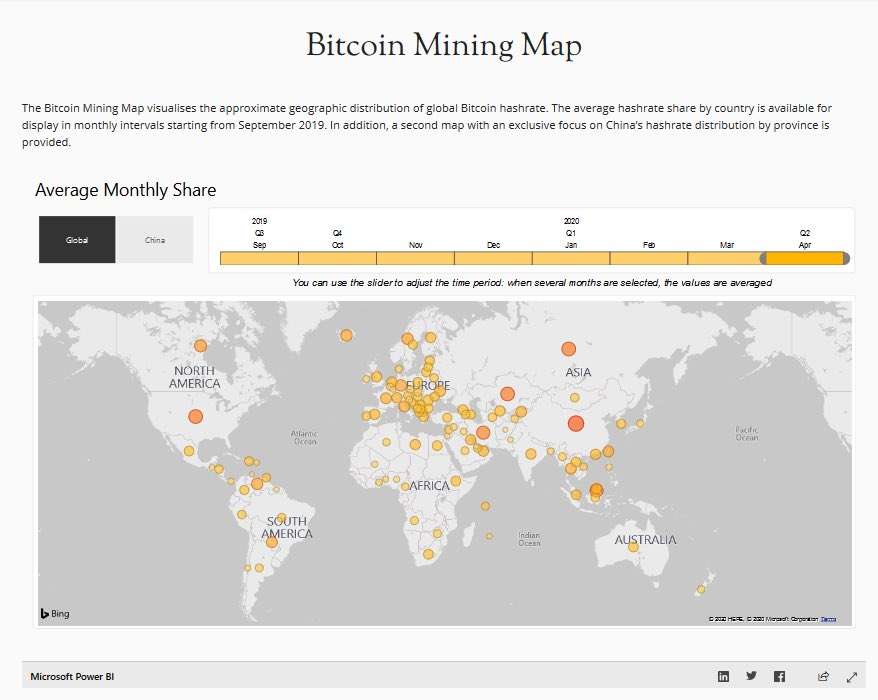 Ripple and its support for global regulation

Finally, the General Counsel highlighted the role Ripple has played in supporting the creation of transparent and intelligent regulation at the global level. In order to improve the financial system, Ripple has been working with regulators both domestically and internationally.