The PlusToken Scammers continue to keep the crypto community on tenterhooks. The biggest scam in the still young history of cryptocurrencies was disguised as a profitable investment program and plundered billions of USD. According to the latest findings, the fraudsters succeeded in stealing 180,000 Bitcoin, 6.4 million Ethereum (ETH) and probably also 485 million XRP and 26 million EOS.

The fraudsters set up a pyramid scheme, with Chinese and Korean investors in particular depositing cryptocurrencies on the PlusToken wallet in order to earn a return. In reality, PlusToken used the deposits of newer customers to pay out older members. After the fraud was uncovered, PlusToken closed its operations in June 2019, and while some fraudsters were arrested, others escaped with the funds.

While over the past year, PlusToken’s Bitcoin and Ethereum transactions caused a stir in the crypto community with suspicions of having caused Bitcoin to plummet from its 2019 high, XRP and EOS are currently the focus of attention. Both Whale Alert and Thomas Silkjaer, CEO and founder of xrplorer.com, reported that the scammers have transferred parts of their XRP. Whale Alert reported a total of two massive XRP transactions worth a total of 284.774 million XRP to unknown wallets.

According to Silkjaer, whose website tracks and tries to combat fraudulent activities on the XRPL, the swindlers behind PlusToken have brought almost 100 million XRP worth about 19 million USD to various exchanges for liquidation last week. The XRP’s were initially transferred and reallocated between 6,500 accounts to cover tracks before being forwarded to exchanges such as Huobi, HitBTC and OKEx, with HitBTC receiving the bulk of the funds. 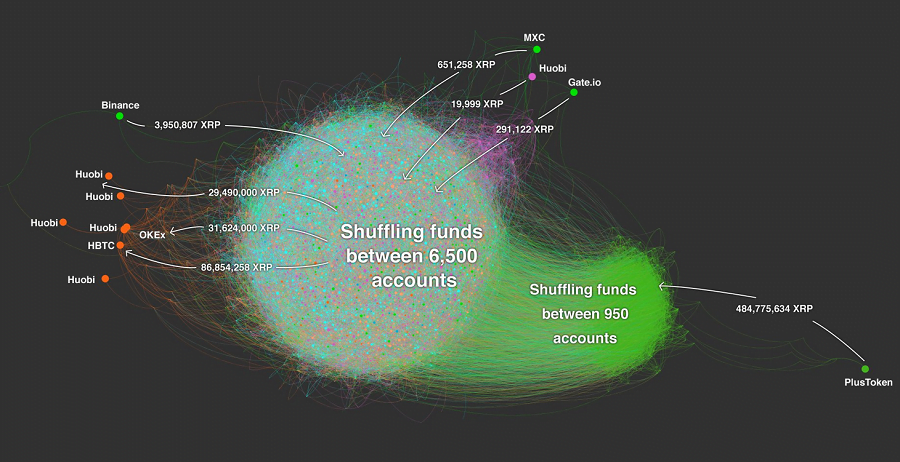 As the chart below shows, since October 2019 all XRP have been transferred to the “shuffle pool”. However, so far only 150 million have left the pool. In the past week, a significant increase was observed, as Silkjaer explained on the chart:

@OKEx  and @HuobiGlobal have also received a fair share, but way more in the past than now. […] If these are illegal funds, @OKEx, @HBTC, and @HuobiGlobal  have no excuse for letting it happen. Especially HBTC, where 70% of all XRP they have _ever_ received comes from this shuffle pool.

Contrary to many of some rumors, neither Ripple nor the validators of the XRP Ledger have the ability to interfere with any account and the ledger. On the other hand, as Silkjaer points out, exchanges have a duty to conduct proper checks on their clients under the KYC and AML regulations. According to the “Crypto Crime Report 2020” by Chainalysis, in 2019, just over 50% of all illegal activities were attributed to the two major crypto exchanges Binance (27.5%) and Huobi (24.7%). However, HitBTC also appeared in the report.

In addition to XRP, the PlusToken scammers last week also moved 26.3 million EOS worth over $67 million to an anonymous wallet created less than 24 hours ago, Whale Alert reported.