Ripple works worldwide with companies, major investors, commercial and central banks and payment service providers. Last year, the Bank of France already discussed in a research paper the possible applications and potential of the digital asset XRP for the banking sector and its possible suitability for the processing of cross-border payments. Last week another meeting was held with the Central Bank of Brazil and senior Ripple staff.

Ripple and Brad Garlinghouse in talks with Central Bank of Brazil

The virtual meeting took place on 29 May 2020 and lasted several hours. On the Ripple side, the following people participated: Brad Garlinghouse (CEO), Ben Lawsky (Member of the Board of Directors), Eric van Miltenburg (Senior VP, Global Operations) and Luiz Antonio Sacco (VP of Global Operations and General Director for Latin America). 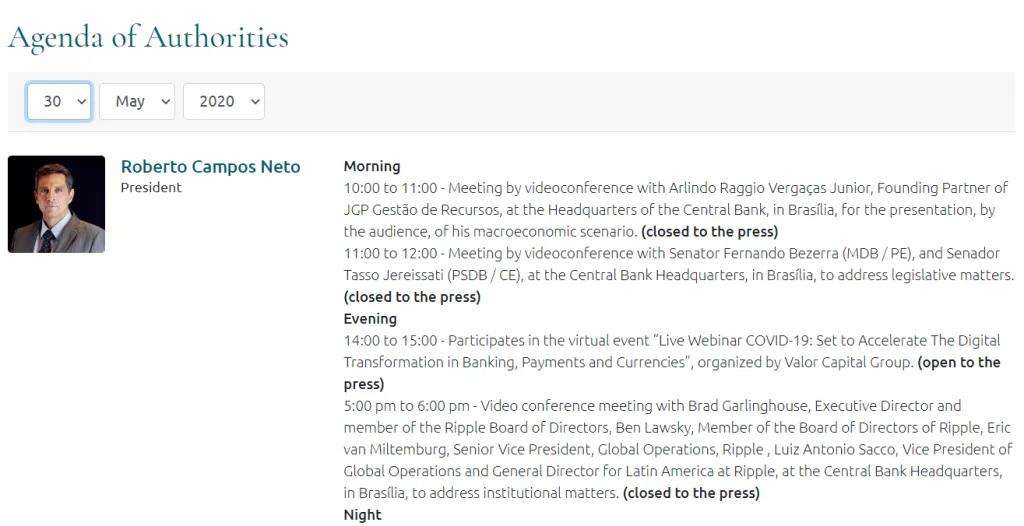 On behalf of the Central Bank of Brazil, its President, Roberto Campos Neto, attended the meeting together with João Manoel Pinho de Mello (Director of Financial System Organization and Resolution) and Otavio Ribeiro Damaso (Director of Regulation). The aim of the meeting was to clarify institutional issues and discuss possible cooperation possibilities.

The meeting was closed to the press, so no further information has been leaked so far. Almost a year ago, around June 2019, Ripple opened an office in Brazil under the direction of Luiz Antonio Sacco. Initially, the main objective was to develop a customer base in Brazil and throughout South America (Chile, Argentina and Peru).

Already at the end of last year, Ripple announced that it was in talks with the country’s authorities and banks to discuss the use of Ripple’s payment solutions, including on-demand liquidity. Sacco stated in an interview at the time that Brazil is one of Ripple’s most important target markets and accounted for almost 30% of the total volume of transactions made via RippleNet.

Campos Neto, President of the Central Bank of Brazil, is regarded in industry circles as a blockchain enthusiast and visionary. Shortly after taking office in March last year, he described how the blockchain will decisively change the financial world:

I believe that two technologies, mainly, will innovate in the financial world. The blockchain, on the network and registration side, and the use of the cloud, to store user information. Banks are becoming information companies.