Messari’s analyst Mira Christanto has published a report on the state of the Asian crypto market. With 42% of the market capitalization of the top 20 cryptocurrencies based in the region, and with a dominance of more than $1 billion worth of companies based in China, Asia is one of the centers for crypto trading.

However, China plays a paramount role not only as the country of origin of some of the most important crypto projects, but also as the place from which 90% of cryptocurrency trading volume in transactions over $10,000 originates.

Moreover, the Asian giant still holds the top position in terms of Bitcoin hash rate, which is within its borders at 65%. For comparison, the next 9 countries with the highest bitcoin hash rate only combine for 35%. Among them are the United States, Russia, Kazakhstan, Malaysia, and others, as the following chart shows. 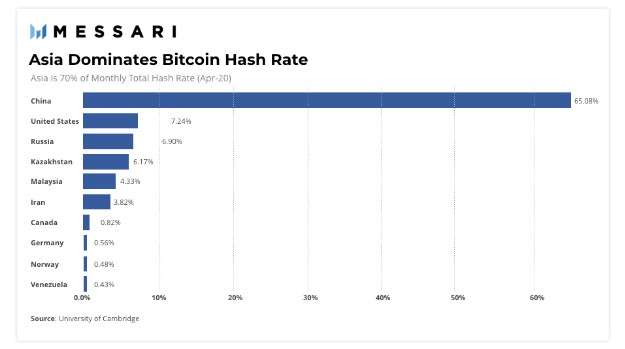 Messari also points out that the yuan has represented more than 90% of the trading volume for Bitcoin in certain periods. As the chart below shows, the dollar has not been the main currency for Bitcoin trading since early 2013. From that year until mid-2016, the yuan became the dominant currency, and then it ceded its position to the stablecoin Tether. 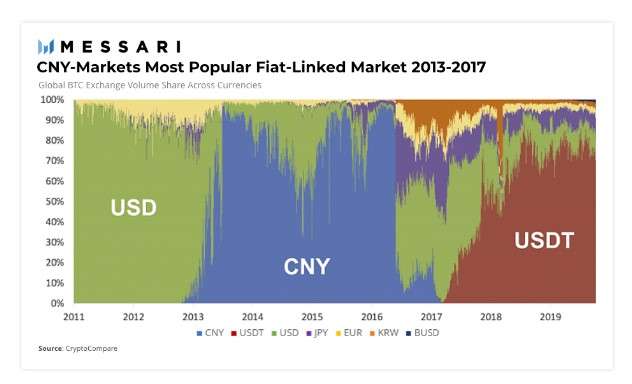 Will China maintain its leading position in the Bitcoin and crypto market?

The Messari report also shows the other side of the coin. During the last few years, China has introduced measures that have had a negative impact on the entire crypto sector. Despite having hosted some of the largest exchanges in the world (Binance, Huobi, and OKEx), the “hostile government narrative” has “squeezed” these entities and their investors.

Additional prohibitions on exchanges by the People’s Bank of China (PBoC) and an increase in the information they must request from their users, caused a drop in market share that Messari estimates at almost 100% during the start of the 2017 rally. In 2020, authorities exerted more pressure and even froze accounts of users “suspected” of trading with cryptocurrencies.

On the other hand, BTC’s mining sector has managed to grow with the support of regional and local governments. This has translated into increased competition for access to mining equipment, electricity supply, and good locations for BTC mining, among others.

However, the sector still faces regulatory uncertainty and increased pressure from the central government. There are recurring rumors of a possible blanket ban on mining activities, which could continue to hit Bitcoin mining pools. Messari concludes: