The price of Bitcoin is trending downward. After BTC reached an all-time high above $58,000, the trend has been on the bearish side ever since. However, among analysts, the sentiment seems to be bearish in the short term, but still bullish in the medium and long term.

In a recent video, Crypto Daily has explored some reasons for Bitcoin’s price plunge. Titled “Bitcoin: The Reality of the Situation,” the YouTuber clarifies that there has been an increase in selling pressure from some miners in China who use F2Pool’s mining operations. Crypto Daily made the important distinction that it is not F2Pool as such, but “the community” of miners that have organized themselves.

Thus, they have moved a significant amount of BTC to exchanges. Their goal, although unsustainable in the medium and long term, according to the YouTuber, is to open short positions in the futures market before moving large amounts of Bitcoin to the exchanges to sink the price and make more profit.

In addition to the above, the price of Bitcoin seems to be reacting to the performance of the traditional market. In recent days, major U.S. markets have posted losses and some investors may be selling assets such as BTC to increase their liquidity. Something similar happened during “Black Thursday” in 2020.

However, as CryptoQuant CEO Ki-Young Ju elaborated, the long-term outlook is still bullish. Ju recorded an outflow of 48,000 BTC from Coinbase today, Feb. 26. While he believes institutions are still accumulating, he expects to see an increase in buying pressure for BTC to resume its upward path. On the factors that led to the market’s current decline, said Ju:

I think the major reason for this drop is the jittering macro environment like the 10-year Treasury note, not whale deposits, miner selling, and lack of institutional demand. 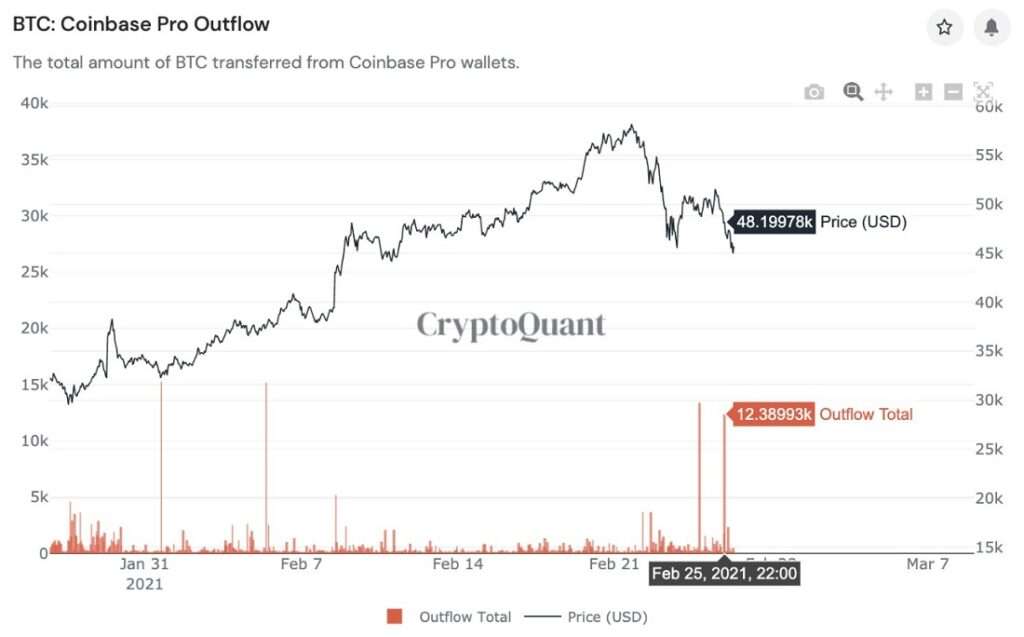 How much could Bitcoin’s price drop?

Trader Michaël van de Poppe has stated in his latest video that February and March are historically a bearish month for the crypto market. The trader believes that investors should take advantage of the drop to accumulate more BTC and their favorite altcoins. Referring to the weekly Bitcoin chart, van de Poppe said:

There is nothing to worry about. We are still in a bullish cycle and we also saw those corrections in 2017 and 2016, the previous bullish cycles (…). It is comparable to the period we had here in June 2016.

The trader compared BTC inflows and outflows from exchanges to reaffirm that Bitcoin’s bull cycle is just beginning. However, in the short term investors should prepare for a potential bear market that could extend throughout March until the price bottoms out. The trader has set current support at $46,000 to $48,000. If this level is broken, $37,000 is likely the bottom that the price could touch before it starts to resume the uptrend.

#Bitcoin couldn't break the $52,000 resistance and broke south towards support.