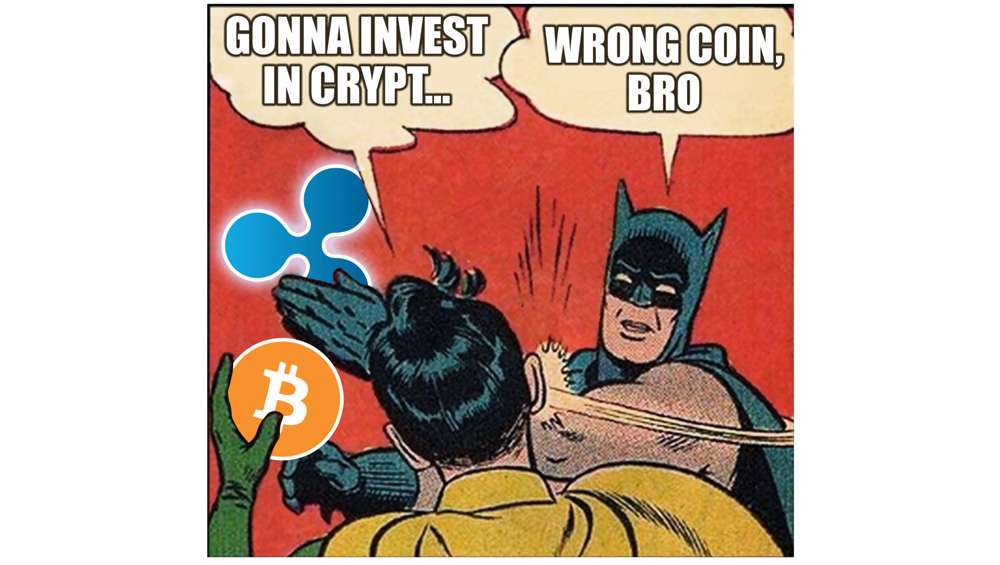 Are you letting the huge potential gains of XRP, LTC & WRX slip under your radar? All this other news (Ahem Coinbase) is great, but I say we focus on what could actually make us some serious crypto profits…

+155% on XRP. That’s what happened 1 week after I wrote about ProfitFarmers’ Price Action Scanner highlighting Ripple as a coin with crazy pump-potential. If you missed out, I suggest you pay CLOSE attention to what ProfitFarmers has shared as their “Pump Watch” for today:

XRP – What’s beyond the horizon?

XRP prices are on fire as we continue to see positive news coming out about their lawsuit. But will it’s price keep soaring? ProfitFarmers technical team weighs in:

You have to look for patterns; if the Exec’s motion to dismiss the lawsuit caused this rally in price, then one can only imagine what an official case dismissal might do. Typically we’d look at TA to give us an idea on where prices could go next, but with a chart that looks like one of Elon’s rockets is taking off, we’ll wait for this price discovery to settle and focus on some FA for now.

“It seems a lot of the bullish sentiment isn’t about the mere motion to dismiss, but more so the belief that the case WILL be dropped entirely. What this leaves us with is price action that will likely be heavily determined by upcoming news pieces.”

So what does ProfitFarmers think is most likely to happen to Ripple’s Price?

Again if you look at the patterns of similar recent events like Coinbase’s listing, once the main bit of news comes true you see a huge spike in price, followed by a pretty sharp correction. We’re anticipating something very similar for XRP if we see news that the lawsuit has been settled.

When you look at the LTCUSDT chart it’s obvious that a bullish breakout is out underway but where will it end?

New all-time highs is our outlook. Why?

Open the LTCBTC chart and we see signs that Litecoin is beginning to reverse the years long downtrend on the BTC pair. i.e Litecoin is gathering up steam to potentially outperform Bitcoin (which is already very bullish).

A clean break hasn’t been achieved yet, but if LTCBTC can reclaim 0.0045 sats we see a decent base forming that could send it to 0.007 sats and beyond.

Once you add that information into the mix the USDT breakout looks extremely interesting.

Remember that we can learn from looking at past patterns. For those of you that are interested, you can open up the ETHBTC and look at the start of 2020. ETHBTC formed a base and began breaking out, this was also a nice early warning sign that the USDT pair was becoming primed to run.

Taking a look at our scanners, we can see that the USDT pairing is in full flight. The BTC pairing though is not quite fully bullish on the H12 and Daily timeframes. This is a clear early warning sign that bullish moves are incoming.

Not familiar with ProfitFarmers market scanners? Here’s a video showing how it made 60% gains in 5 minutes. You can also get access to ProfitFarmers scanners for free on their site.

WRX – The Indian BNB coin shows no signs of slowing down

We also like WRXUSDT. This coin has been on fire since early April where we managed to catch the USDT and BTC pair for 2 rounds of +100% gains. This is one to watch for an exciting move. The price has found support on and just above the golden pocket (0.618 FIB) around $2.6-$3 since it’s mega pump to $6.7 a couple of weeks ago when we made 2 signals for WRX that made close to 100% gains. 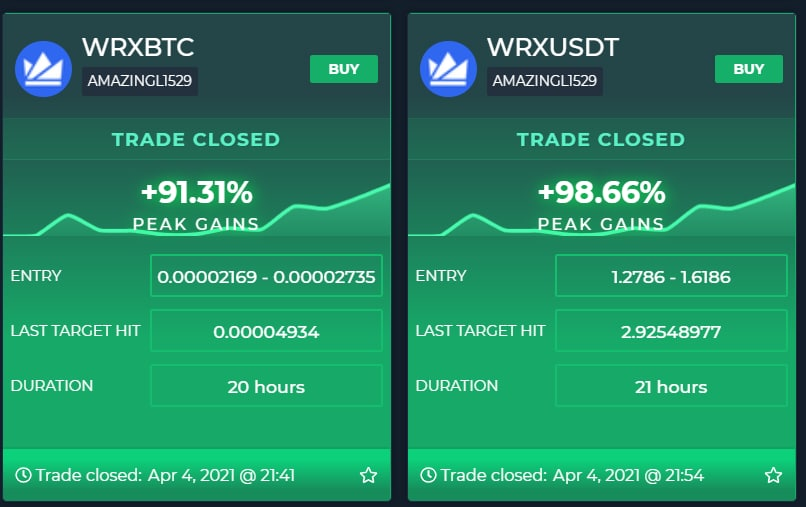 Since then we’ve seen price action challenging key resistance around $4.6 3-4 times already. As we all know, resistance becomes futile once the door is kicked in several times…

If you still feel the bull run has legs (we do) then this is a coin we are comfortable to keep adding to on dips. But you can also set an alarm for the break of $4.6 and join the train at that stage.

Our price action scanner confirms the strong bullish trend with pullbacks going on in the short term. This is a classic ‘buy the dips’ setup for us or watch the breakout.

How to make sure you don’t miss out on the next pump:

Quit wasting time and sitting on the sidelines as you watch these crazy crypto gains rocket past you, just out of arm’s reach. Take the first step and prepare yourself for what’s to come…

One of the fastest ways you can spot profitable price action is by using the market scanners from ProfitFarmers (which they’re giving away for free!) They give you an instant overview of trend data from 8 timeframes for hundreds of coins, helping you find that needle in the haystack!

DO YOUR OWN RESEARCH

You MUST remember that taking responsibility for your trading decisions is a core fundamental to successful trading. Apply what you’ve learned to form a more profitable way of thinking, but never make financial decisions without thoroughly researching things yourself.