The cryptocurrency world has been shaken by what has now been defined as the biggest DeFi hack in history. As we reported earlier today, the Binance Smart Chain-based cross-chain DeFi platform Poly Network had been hacked for $600 million. The hacker had stolen BSC, Polygon and Ethereum assets including Uniswap, USD Coin, renBTC, Wrapped BTC and DAI.

Read More: Poly Network loses over $600M in crypto in what is now the biggest DeFi hack

Even before the cryptocurrency world could fully grasp what had happened, the hacker has revealed that he/she/they are open to returning the funds. This was after Poly Network urged the hacker to return the funds as it pledged to pursue legal actions against the attacker.

To start with, the Poly Network team had implored the hackers to return the funds. “We want to establish communication with you and urge you to return the hacked assets,” it stated in its message. “Law enforcement in any country will regard this as a major economic crime and you will be pursued. It is very unwise for you to do any further transactions.” 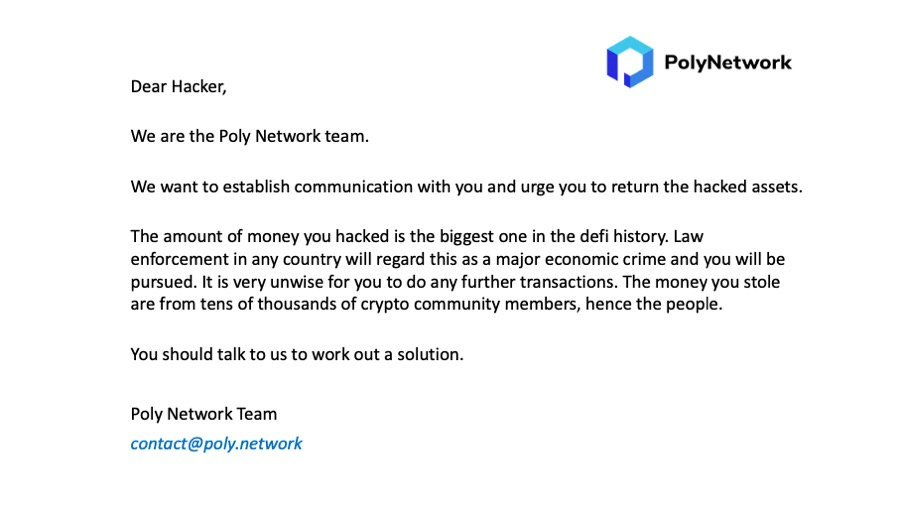 The hacker did respond. In his message at 3.48 AM UTC, he boldly claimed, “READY TO RETURN THE FUNDS!”

Hacker: "READY TO RETURN THE FUND!"

Before returning the funds, the hacker toyed with the idea of leaving the decision on where to direct the money to the community. He suggested, “What if I make a new token and let the DAO decide where the tokens go.” He was referring to creating a decentralized autonomous organization, which is a blockchain-based community in which governance and decision-making are left to all the members, who vote democratically.

However, shortly after, he revealed he had changed his mind regarding the DAO.

FAILED TO CONTACT THE POLY. I NEED A SECURED MULTISIG WALLET FROM YOU. IT’S ALREADY A LEGEND TO WIN SO MUCH FORTUNE. IT WILL BE AN ETERNAL LEGEND TO SAVE THE WORLD. I MADE THE DECISION, NO MORE DAO.

In the attack, the hacker stole BSC, Ethereum and Polygon assets.

In his message, the hacker told the Poly Network community that the hack could have been twice as large had he decided to take the “shitcoins.”

IT WOULD HAVE BEEN A BILLION HACK IF I HAD MOVED REMAINING SHITCOINS! DID I JUST SAVE THE PROJECT? NOT SO INTERESTED IN MONEY, NOW CONSIDERING RETURNING SOME TOKENS OR JUST LEAVING THEM HERE.