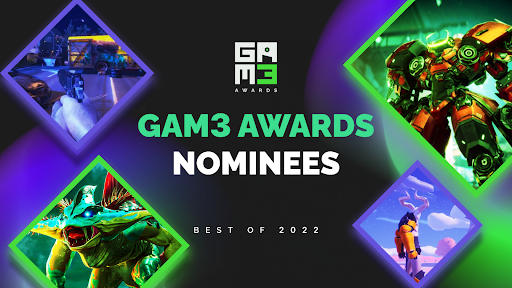 The final nominees for the event which is slated for Dec. 15 feature 106 games spanning 13 blockchain networks that stand a chance to be awarded in 16 categories after a jury panel, community members, and the gaming industry players complete voting.

The nominees, which were picked for their contribution to gaming and not for tokenonics, include names like Illuvium, Big Time, Gods Unchained, The Harvest, and Superior in the Game of the Year category.

High-profile names in the categories include Axie Infinity, The Sandbox, Star Atlas, and Guild of Guardians.  In a statement, Urvit Goel, the head of Global Games at Polygon Studios, noted that the list showcases how many quality blockchain games are being built and the passion of builders.

It is an amazing list of quality games that really showcase what is coming in the blockchain gaming space. The GAM3 Awards has shown how many quality blockchain games are being built, and the passion of those builders. It’s also clear that Polygon continues to be the leader when it comes to both quality, quantity, and diversity of web3 games,

Polkastarter Gaming intends to give out over $300,000 in prizes to the game makers during the award show which will be live-streamed. The games will be judged based on multiple criteria including core loop, graphics, accessibility, replayability factor, fun elements, and overall gameplay experience.

The titles nominated in the Game of the Year category are, notably, games that are all competing with leading traditional games for quality while promoting blockchain elements like cryptocurrencies and non-fungible tokens (NFTs).

Polkastarter has noted that it intends for the annual event to help drive the popularity and adoption of Web 3.0 gaming. Web 3.0 gaming, meanwhile, has come a long way having seen over $1.1 billion in investments during Q3 of 2022 according to a Dappradar report.

The report also estimates that investments in web 3 gaming could reach $10 billion in all of 2022 despite the bear market the blockchain space has been weathering. At the estimate, the industry sector would have seen more than double the $4 billion invested in 2021, a highly bullish turnout that points to massive potential.

GAM3 Polkastarter
Previous ArticleBitcoin to become less important in billion-$-market – Litecoin, ZCash or Monero can be answer to CBDCs
Next Article Big whales and institutional investors super bullish on Bitcoin and VeChain