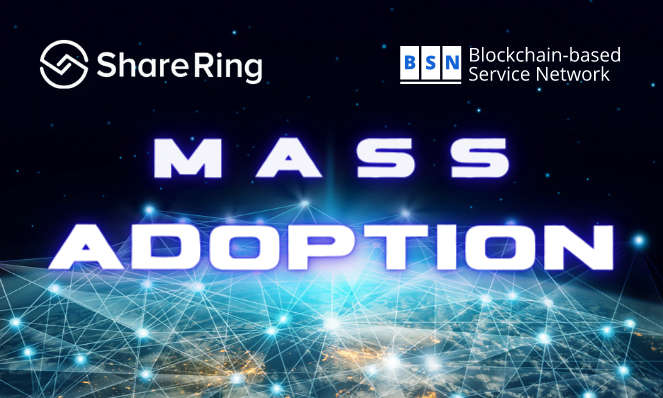 So how big is this news for ShareRing, really? Does it live up to the hype?

To be honest, I’ve heard the words “Mass Adoption” so often the phrase no longer excites me like it used to.

Are ShareRing and BSN writing checks they can’t cash?

Or can they be the first to deliver on this “holy grail” of crypto adoption? Let’s take a closer look!

What is “Mass Adoption”? 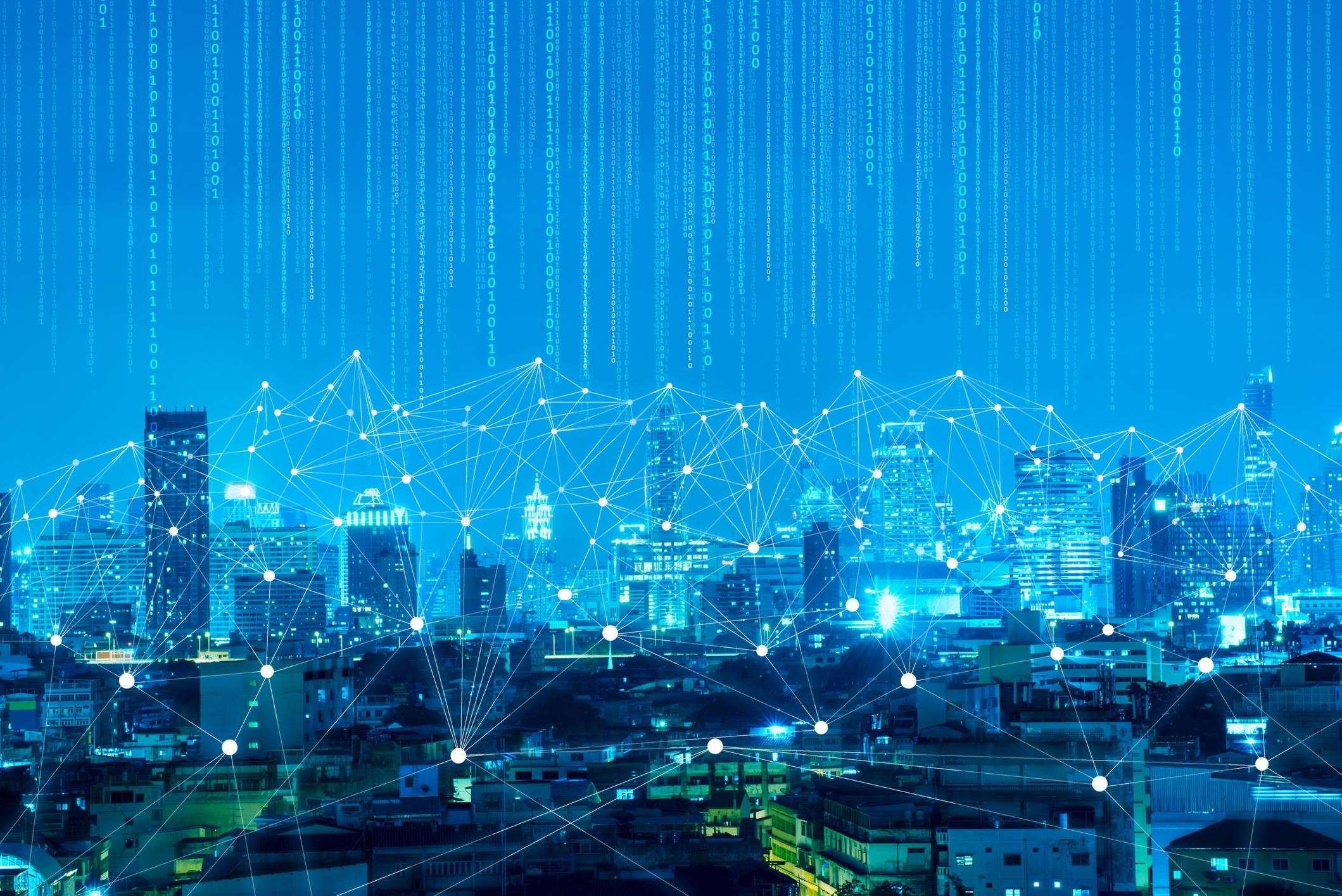 While mass adoption has always been a common phrase in the blockchain industry, appearing in nearly every whitepaper and ICO website since 2017, no crypto project or group has quite delivered on this promise in terms of gaining even 10’s of millions of verified real, active users, or even 1% of the 4.5 billion global internet users. While there may be tens of millions of wallets, it’s difficult to know how many have the same owner, as I have personally created dozens myself over the years. And even the biggest tokenized projects who have usable products or services fall far short of the 45 million user mark.

Even before this news with BSN, ShareRing has boasted some incredible user projections, mainly due to their strategy of integration, white-labeling, and leveraging their government and B2B customers’ audiences. From just one of their partnerships alone, they expect over 30 million users and 45 million transactions a year. This would immediately put them in the lead in terms of real mass adoption, without the 5-10 million E-Visas Thailand processes per year (which requires multiple transactions for each!) mentioned in the same tweet. 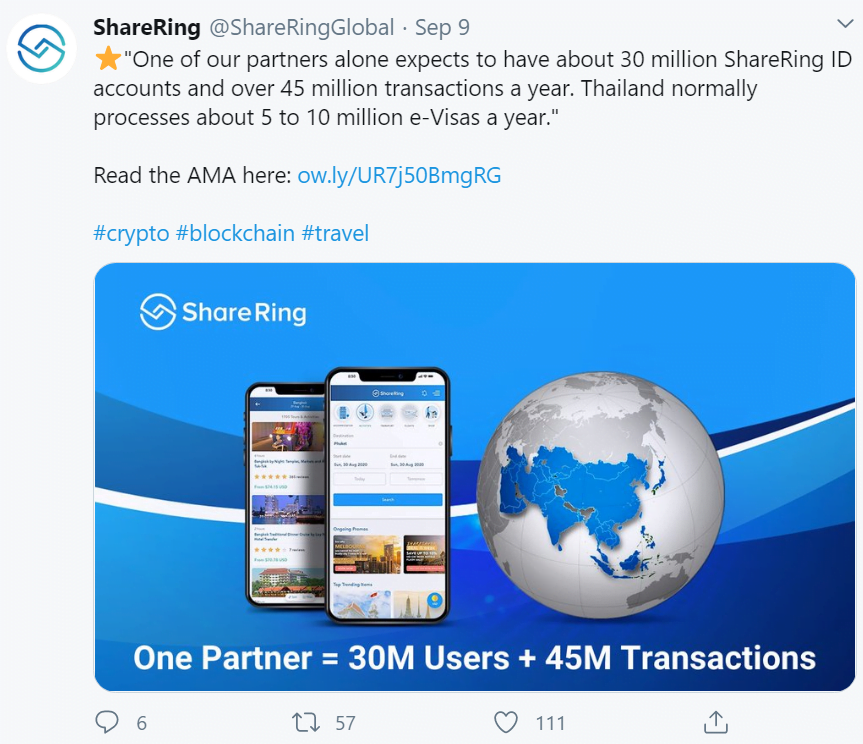 I believe ShareRing, on their own, may be the first to achieve this holy grail of true mass adoption the crypto community has long dreamed. While perhaps not in the sense that everyone decides to learn how to use Bitcoin, but in terms of millions of real people finally using blockchain-powered products without ever knowing it.

Now let’s take a closer look at BSN and how they will help fast-track ShareRing’s global expansion.

On October 24th, 2019, President Xi Jinping of China called upon his country’s tech community to accelerate their efforts in blockchain adoption and innovation. According to a report in December, the country had filed over 68% of the world’s total blockchain patents. At the direction of the National Information Center (SIC), the national BSN was formed a week earlier on Oct. 15th, already ahead of the game.

The BSN was founded by several massive partners, the main four of which include:

ShareRing was accepted into BSN International, launched July 31st, the global division of BSN China. BSN China only has a few select permissioned blockchains, like Hyperledger, approved for use domestically. BSN International can offer BSN China’s services to the world in addition to having many more, including permissionless blockchains, like SHR, as well as traditional framework technology partner offerings.

“The BSN is a one-stop shop for DApp developers to deploy and manage any permissioned or permissionless blockchain applications. We have built entire operating environments and shared nodes on BSN’s public city nodes (PCN) around the world. Developers only need to choose which PCN to connect and upload smart contracts. We will do everything else for you!”

In a nutshell, with prices starting at a ridiculously cheap $20/mo, they make all the blockchain DApps and services in their cloud available to any company that wants to use them. They have very powerful founders and partners, and are handpicking projects, like ShareRing, they feel offer the most useful products to their prospective customers, which seems to be pretty much everyone on planet Earth.

With, or without ShareRing’s help, I would be stunned if they were not successful with such an amazing business model. Blockchain engineers are some of the most expensive, rare, and highly sought-after professionals of this decade, probably due to the fact the profession itself is less than a decade old. There is far more demand than supply for their talents, and although many companies are rushing to leverage the competitive advantages of DLT, they are struggling to secure the resources needed to incorporate them. Solving this problem is worth a lot of money to many businesses and their investors.

The concept of this government-sponsored aggregator of advanced tech is so powerful, it’s been likened to a “secret weapon” in a recent Forbes article. Their sights are set to supply the world’s best blockchain technologies for the lowest costs to as many businesses, and consequently, users as possible.

In simpler terms, “Mass Adoption” is a good description of their business plan. 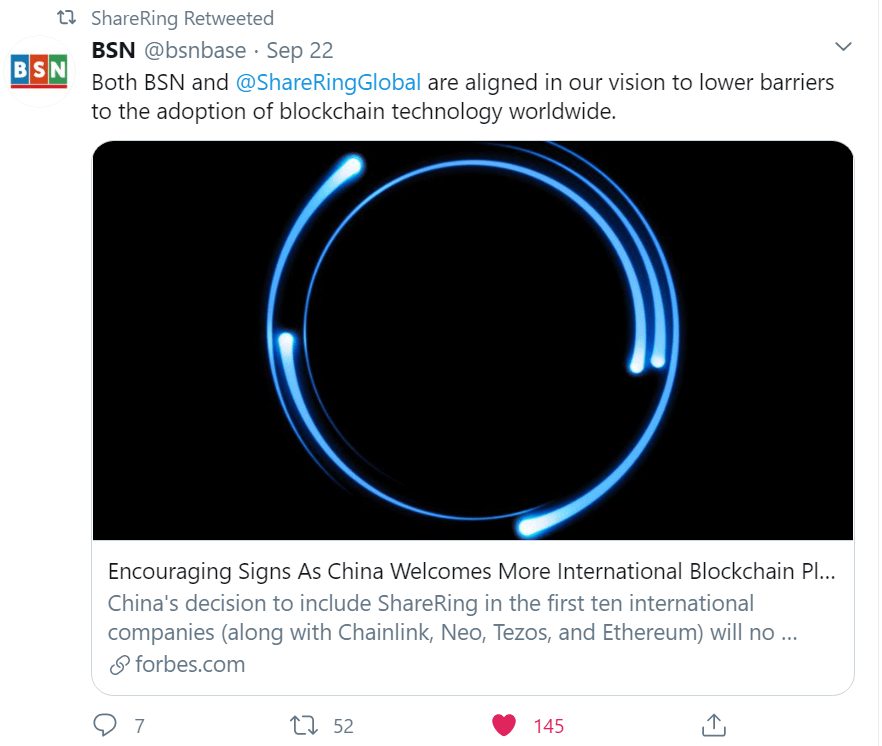 What this means for ShareRing

Tim Bos, CEO of ShareRing, said it best when describing what this means for ShareRing:

“We are honoured to partner with BSN, joining industry giants like Ethereum, Neo, Chainlink and Tezos. We share their vision of removing costly entry barriers to blockchain technology and its benefits for businesses and individuals regardless of their size, resources or industry expertise. We are confident we will achieve our mission together.”

And in a recent “AMA Throwback”, he elaborated on the benefits most SHR hodlers care about, transactions: 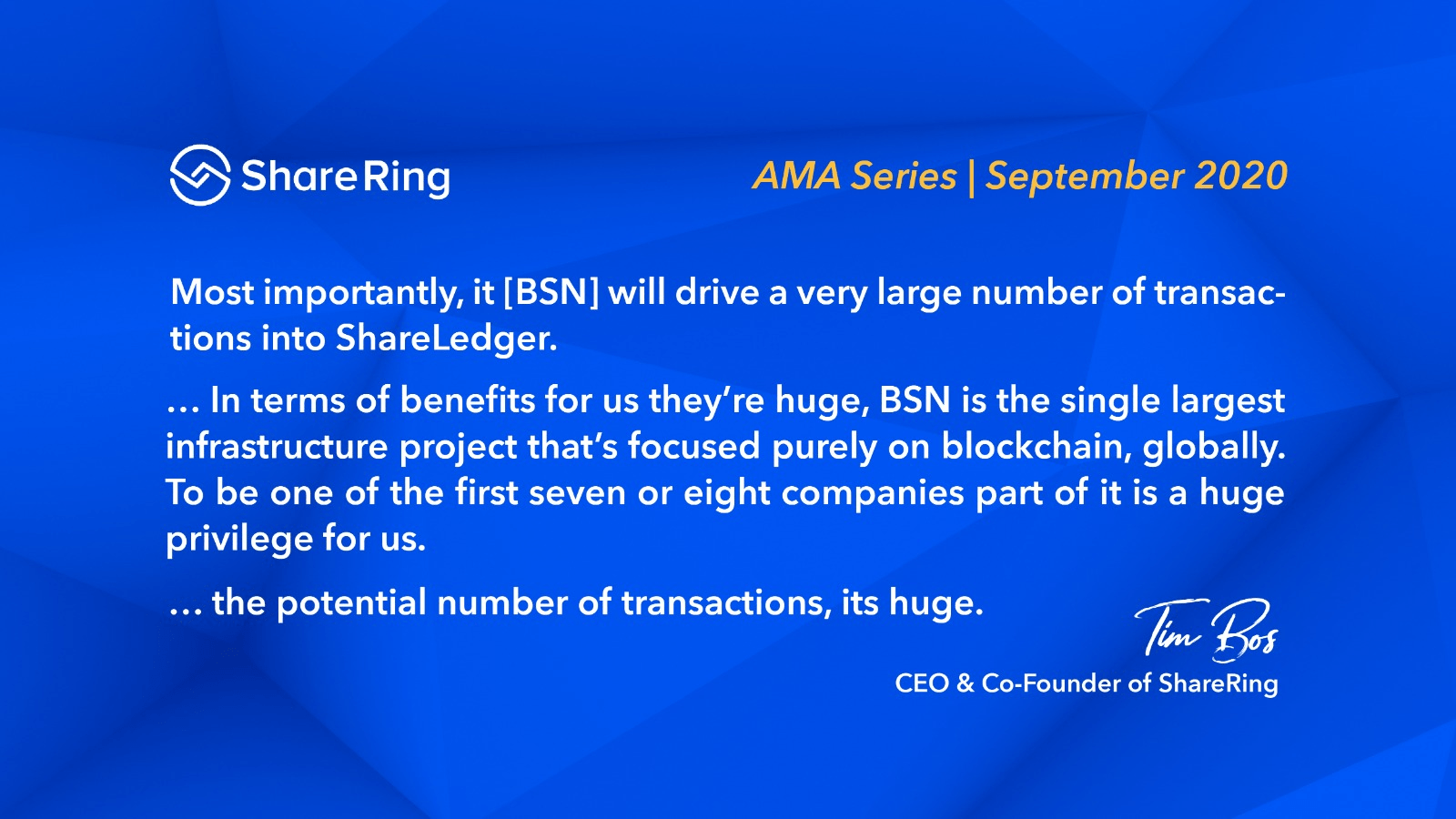 Let’s do a quick recap of the highlights:

Once you put these pieces together, the picture is quite clear: More users, more transactions.

How many? One could only speculate… in the live AMA Tim said “the net result of that is a LOT more transactions” and “over the next 6 to 12 months, it’s gonna be HUGE.” When the subject of a specific number came up, he voiced hesitance as he didn’t want to “lowball” it.

We know ShareRing takes the volume approach to transaction fees, as Tim stated in the AMA, they often aim to provide very low cost, or ‘free’ services which result in many transactions for the network.

With single companies’ estimates in the tens of millions of users and transactions a year, if BSN offers ShareRing’s products to ten or more companies like that, we could easily be talking about hundreds of millions of users on the ShareRing network, and if just 100 million users perform just 10 transactions a year on average (rentals, deliveries, and eVOA’s range between 4-6 per), that’s over 1 BILLION more transactions without ShareRing making a single sales pitch. Over $25,000,000+ in transaction fees alone, and we’ve already covered where those go.

Tim also mentioned his excitement about the prospect of gaining access to China Union Pay, and perhaps the most interesting surprise, smart cities.

Thailand is reportedly leading the way when it comes to smart cities. These modern, ecofriendly societies are the perfect environment to deploy sharing economy tech like vehicle sharing, accommodation rentals, contactless payments, digital identities, decentralized marketplaces, and more. And as we already know, ShareRing has quite a few pioneering partnerships within the Thailand ecosystem, including eVisas and insurance.

Looking ahead, we have the Thailand launch, App launch, staking, new Tier-1 exchange listings, and even more big partnership announcements over the next month or so. There’s never been a better time to remind your friends about ShareRing, right before all the real fun begins.

We can say we were there, with $SHR