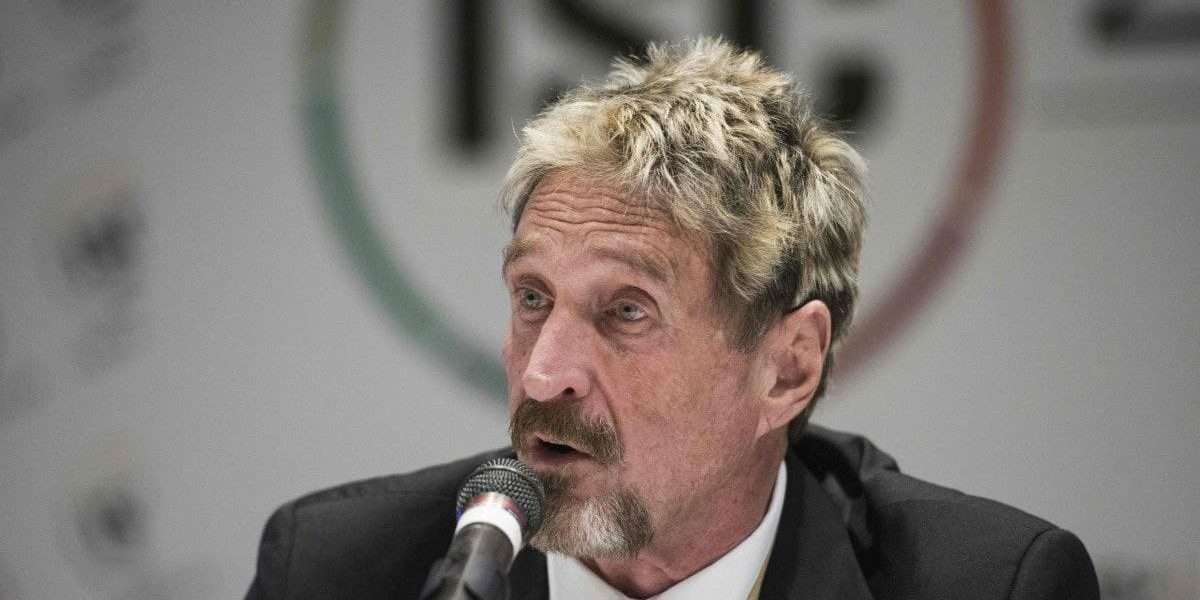 A statement from Spain’s justice department has confirmed that John McAfee has been found dead in his cell. Thus far, his death has been reported as a suicide. His death follows an extradition approval to the US that was accepted by the Spanish government. For years, McAfee was wanted by several countries – in Spain, for tax evasion. Throughout the years, the entrepreneur has bragged of besting authorities by moving from country to country, employing impersonators and staying aboard his megayacht. He repeatedly stated that the CIA was after him and that US authorities were keen on murdering him.

The crypto community took note of him after he began making Bitcoin predictions. McAfee was a big advocate of Bitcoin. In 2020, he predicted that Bitcoin would end the year priced at $1 million or he’d eat his own dick. He would back out and clarify that high-class escorts would be doing the presumptive dick-eating.

Related: Bitcoin Price: John McAfee raises his BTC prediction to 2 million USD by the end of 2020

Last year, McAfee was indicted by the US for money laundering and fraud after his involvement with initial coin offerings (ICO). He was accused of pump-and-dump cryptocurrency schemes using social media. According to attorneys, if convicted in the US, McAfee was facing life imprisonment. As such, he called on the Spanish government to deny the US request.

Curiously, while commenting on the identity of Satoshi Nakamoto, the inventor of Bitcoin, McAfee said that he knows the inventor and only a handful of people did. After teasing that he would reveal Satoshi’s real identity, he would later backtrack on this as well.

Last week, through his Twitter account, it was revealed that he now holds no cryptocurrencies with most of his assets seized. The tweet portrayed a defeated version of John McAfee.

The US believes I have hidden crypto. I wish I did but it has dissolved through the many hands of Team McAfee (your belief is not required), and my remaining assets are all seized. My friends evaporated through fear of association.

Yet, I regret nothing.

Since the news broke, the crypto community has been paying tribute to him. Cardano’s Charles Hoskinson has shared a video titled ‘RIP John McAfee’. He called him one of the most interesting people in the cryptocurrency world.

He explained that the reason to commit suicide was self-evident as he faced over 30 years in prison. Aged 30, he was likely to die in prison.

Anthony Pompliano, a popular name and one of Bitcoin’s biggest advocates has also shared his tribute calling McAfee a ‘kind, funny, and incredibly intelligent person’.

I once had the opportunity to spend the day with the legend @officialmcafee on his boat in the Bahamas.

He was kind, funny, and incredibly intelligent.

Will always remember that day. RIP to one of the world’s most unique individuals. pic.twitter.com/B5FnvDBRYK

Following his comments in past years, some in the community are unconvinced by his death. Some think that it was faked either by him or by authorities. In the past, he has stated that he would never commit suicide, and if it happened, US officials had done it.

Getting subtle messages from U.S. officials saying, in effect: "We're coming for you McAfee! We're going to kill yourself". I got a tattoo today just in case. If I suicide myself, I didn't. I was whackd. Check my right arm.$WHACKD available only on https://t.co/HdSEYi9krq🙂 pic.twitter.com/rJ0Vi2Hpjj