YouTuber and analyst Lark Davis has uploaded a new video predicting an altcoin season for April. Davis believes that during this month, there could be a “massive” rally for the crypto market. The key, according to the analyst, lies in Bitcoin’s dominance and Ethereum’s performance.

This latter can be used as a “thermometer” to measure the “health of the entire market.” In that regard, Davis noted that ETH has posted gains of 30% in the last 14 days. In contrast, BTC has “only” risen 7% in the same period. Davis concluded:

So, ETH is outperforming Bitcoin by a ratio of 2 to 1. Twitter’s Altcoin Sherpa laid out the ratio nicely (pictured below). 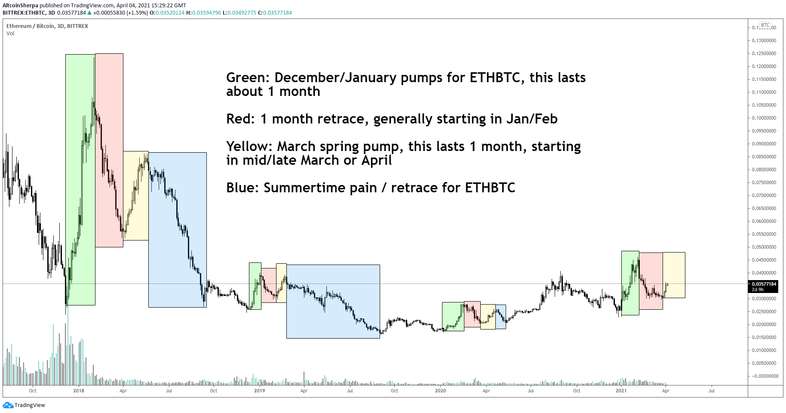 In explaining the chart, Davis noted that Ethereum has had a strong start to the year since 2019, followed by a correction and “cooling” in price, then jumping into a rally. As a result, Davis believes the market is now “poised” for a massive bull cycle, with ETH poised for significantly higher gains over Bitcoin.

The decline in Bitcoin dominance

Speaking about one of the most important metrics for measuring the arrival of “altcoin season,” the Bitcoin dominance, Davis stated that it is “dropping hard.” In recent weeks, this trend has been on the rise, as the analyst said:

This metric represents Bitcoin as a total share of the market as a whole (…). It is in a critical zone, in a key support zone (…). If support breaks, then it will be a crazy altseason. We have to wait for confirmation.

If BTC continues to lose dominance, Davis predicts a rally for Ethereum that could take the price to $3,000. Cryptocurrencies with large market cap such as Cardano, Litecoin, and XRP could rise by 2 to 5 times.

Cryptocurrencies in the top 20 could rise by 10 to 20 times, according to Davis. Smaller altcoins could rise by as much as 50 to 100 times. The analyst believes that “basically all of them will do that.” Even if Bitcoin’s dominance rises, altcoins would still post gains, albeit by smaller percentages.

To support his bullish thesis, Davis presented a chart from Rekt Capital that “measures hype cycles in altcoins.” The chart shows the peaks and “cooldowns” in the market when Bitcoin’s price is trending down and altcoins are trending up. According to the metric, the peak could come late this year or in early 2022. The analyst added:

Take into consideration that the total market cap of cryptocurrencies is $2 trillion, there is a chance that we will reach $10 trillion before reaching the top of the bull cycle.

Another deciding factor for an altcoin season could be the participation from South Korean investors, measured by the “Kimchi Premium.” On average, people in this country are paying up to 12% more than the rest of the world. Davis believes that “crypto mania” has hit South Korea again, mostly retail investors who prefer to allocate money to altcoins.