The crypto exchange Kraken published a report on the effects of the “Great Wealth Transfer” on Bitcoin (BTC). This phenomenon will occur when the wealth of the Boomers is transferred to the Millennials. The cash injection that Bitcoin could have with only 1% of this wealth is estimated to be one trillion dollars. However, Kraken’s estimates are conservative and apply only to the United States. Worldwide, investments in Bitcoin by Millennials could also increase and encourage adoption.

Bitcoin will benefit from the “Great Wealth Transfer”

According to Kraken, the “Great Wealth Transfer” will be the greatest redistribution of wealth in the history of the United States and the world. 70% of this transfer will take place within the next 10 years. So the impact on Bitcoin could be significant. Kraken says that Bitcoin will go through a steep adoption curve in the next few years.

During this time, new users and investors will enter the Bitcoin network with the nearly 68 trillion dollars inherited from the Boomers. Kraken claims that injecting at least 1% of this wealth into emerging technologies will be known as “The Big Adoption”. 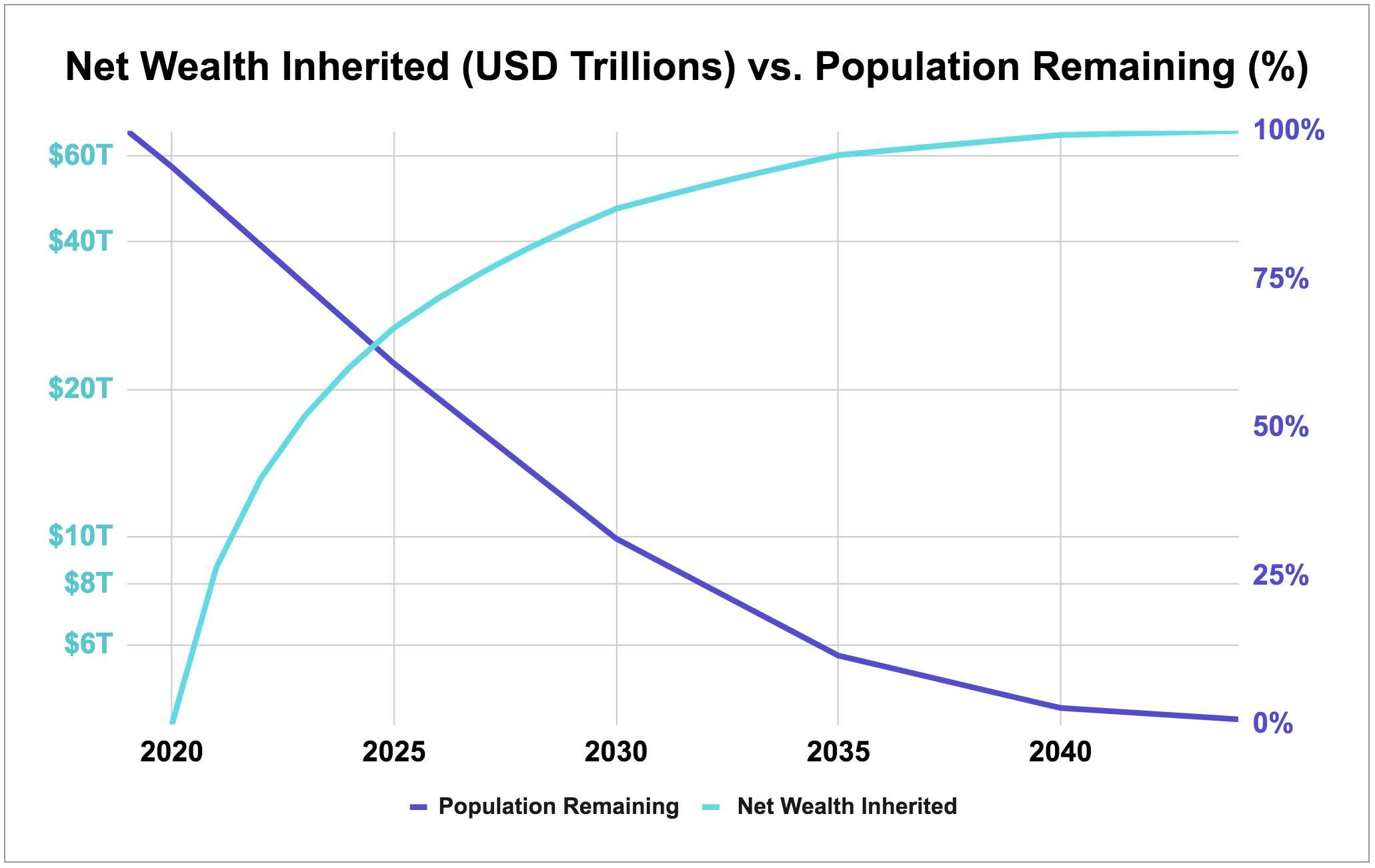 Kraken bases its assertions on the increase in the number of wallets that have funds between 0,1 and 1 BTC since the introduction of Bitcoin. According to Kraken, this number has risen steadily, from 240,000 wallets in January 2014 to 2,000,000 in January this year. In addition, the number of daily transfers confirmed in the Bitcoin network has increased from less than 100 in 2009 to 320,000 in 2020. 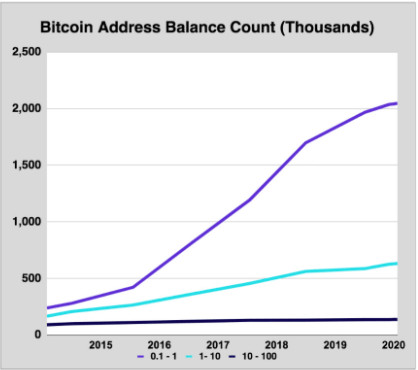 Kraken also refers to a number of surveys conducted by investment firms in recent years. According to the information collected, the number of US citizens who own some kind of crypto-asset is between 9% and 15%. Of the owners of these assets, 61% said they were held as an investment, 30% said they were intended for commercial transactions, 26% as an asset outside traditional banks, and 18% as a method of remittances.

This statement is supported by a study by Charles Schwab published in December 2019. The study confirmed that Bitcoin is becoming a popular investment option for Millennials. According to Charles Schwab’s findings, Millennials currently allocate a higher percentage of their investments to Bitcoin ETFs than other generations. As can be seen in the following graph, this trend will increase in the coming years. 42% of respondents aged 18-34 years stated that they will buy Bitcoin in the coming years. 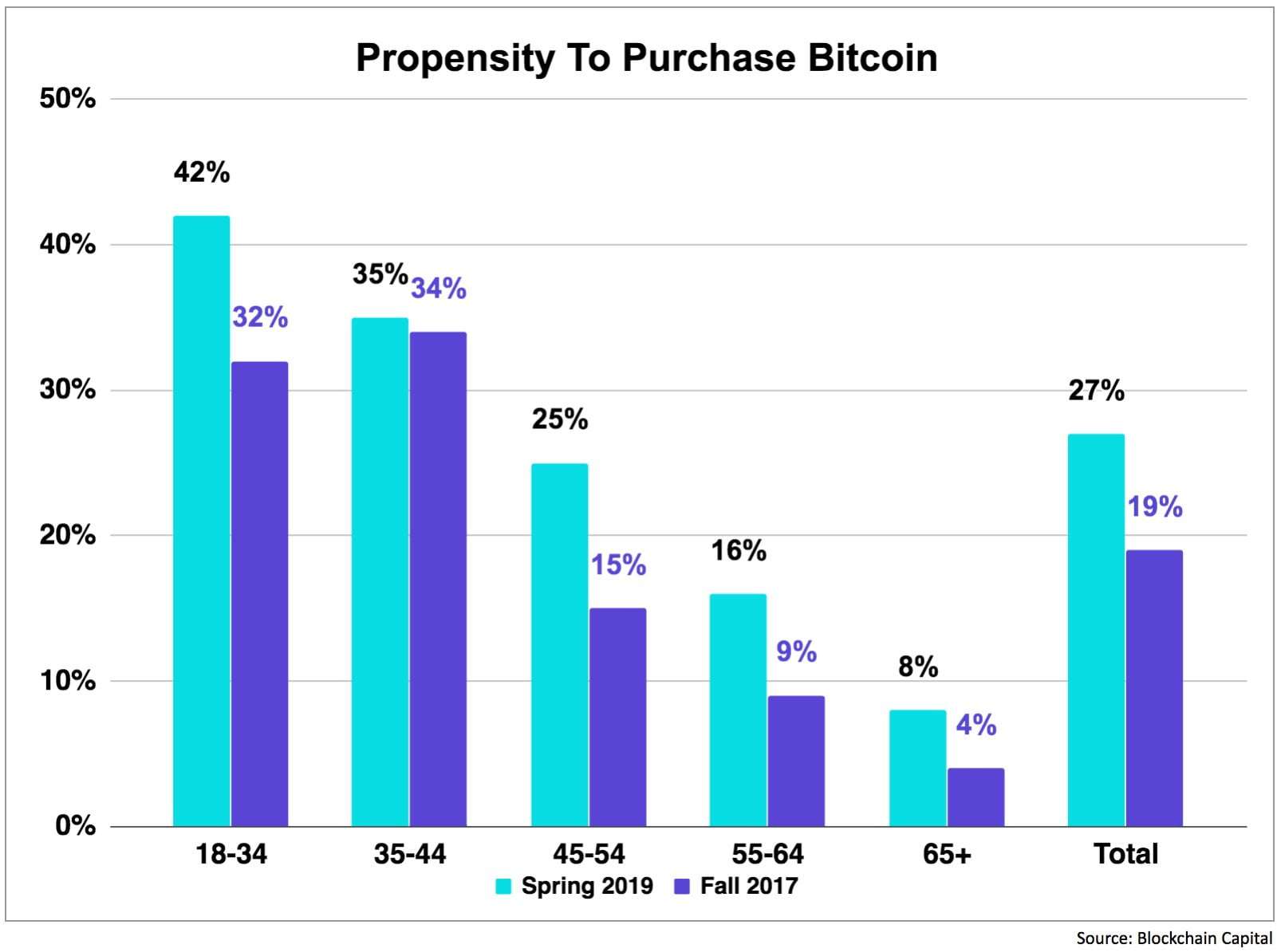 According to Kraken’s estimate, Bitcoin’s price for 2044, with an investment of around $971 billion and a peak allocation of $349,000 will be $70,000. The chart below shows BTC’s price estimates in relation to its peak allocation. Kraken only considers the United States and not the global investment that Bitcoin will receive within the next few years. Finally, the millennials have generational traits that make them more likely to invest in BTC: a preference for transparency and mobility and a distrust toward banks.

According to Kraken’s estimate, Bitcoin’s price for 2044, with an investment of around $971 billion and a 5% peak allocation will be $349,000, with 1% peak allocation it will be $70,000. The chart below shows the BTC price estimates in relation to its peak allocation. Kraken only considers the United States and not the global investment that will receive Bitcoin within the next few years. Finally, the millennials have generational traits that make them more likely to invest in BTC: a preference for transparency and mobility and a distrust of banks.

Bitcoin BTC
Previous ArticleExpansion into the US: TRON (TRX) is integrated on Metal Pay
Next Article NULS 2.0 Project Nerve Network bridges into Bitcoin and Ethereum universe