The institutional adoption of Bitcoin is growing faster. Although the number one cryptocurrency is moving in the range of $18,400 to $19,500, trying to break the resistance of its all-time high, every week it seems that a giant of the traditional market takes a long position in BTC. At least, that’s how it’s been over the last 6 months since the MicroStrategy, Square, and PayPal announcements.

In that sense, JP Morgan analyst Nikolaos Panigirtzoglou admits in anew a report that the institutional adoption of Bitcoin “has only begun”. The analyst estimates that Bitcoin only represents 0.18% of the investment of family offices. In contrast, gold ETFs represent 3.3%. Therefore, a change in the allocation of funds would bring “billions” into Bitcoin.

Along these lines, researcher Tuur Demeester also referred to the purchase of $100 million in BTC from the insurance giant MassMutual. According to him, this announcement could have a similar domino effect to that of MicroStrategy, as Demeester states:

Back of napkin: if the entire Life Insurance sector were to allocate just 0.1% of its assets to bitcoin at current prices, they would be in the market to buy 251,400 BTC for $4.5B – or 1.35% of circulating supply.

JPMorgan’s report indicates that three main factors have been key to the institutions’ shift to Bitcoin: the “currency devaluation” in major economies, the Covid-19 pandemic, and the U.S. election.

As the image below shows, Grayscale’s Bitcoin Trust has outperformed gold during 2020. Grayscale’s product (GBTC) has had unprecedented success this year and the company has increased its funds in cryptocurrencies to over $12.2 billion due to strong demand from its clients. 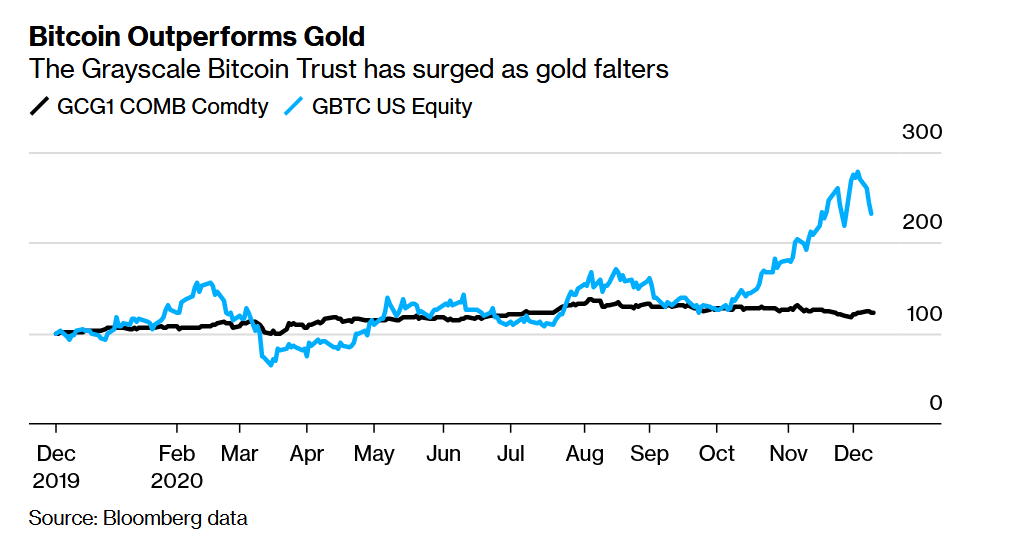 Institutions’ investment in Bitcoin not priced in

As reported by CNF, the company led by Michael Saylor, MicroStrategy, has made a risky bet. The company will issue $650 million worth of senior convertible notes to buy more Bitcoin, in line with its treasury strategy. The initial offer was $400 million, but strong institutional demand allowed MicroStrategy to issue more debt.

Despite of this, the price of Bitcoin has remained “stagnant” over the last few weeks. Via Twitter, Nic Carter wonders why there hasn’t been a significant reaction in the market. Whales don’t usually announce their purchases to take advantage of bearish trends, as Carter said:

There’s no way you can buy $650m worth of BTC without a market impact. […] Never before have we seen a whale publicly announce, in advance, that they would be taking a position in specific size. market should obviously be incorporating that info.

My point is that the market should logically be anticipating the market impact of the forecasted buy (which will absolutely be nonzero), not that I expect Saylor to smash ‘market buy’ on Coinbase.

Carter did not come to a satisfactory conclusion about the apparent immobility of Bitcoin’s price in the face of the company’s purchase. Some community members have expressed concern about Michael Saylor’s strategy and fear that the CEO is preparing to “dump” the market. However, MicroStrategy’s CEO has said that he plans to hold Bitcoin for years.