Only for the third time in the history of Bitcoin, the halving will take place on May 20 this year. For many analysts, the event is an extremely bullish event, as the number of BTCs issued per block (approximately every 10 minutes) will be halved from 12.5 to 6.25, and with it Bitcoin’s inflation rate. From a purely economic point of view, a supply shock could therefore occur, which could cause the price of Bitcoin to rise.

At least historically, Bitcoin halving has always supported this assumption. As the following graph (Liquid Index) of BraveNewCoin shows, after the last two halvings there was an accumulation phase shortly before the event, during which the BTC price rose slightly. After the halving, BTC recorded a strong price increase. 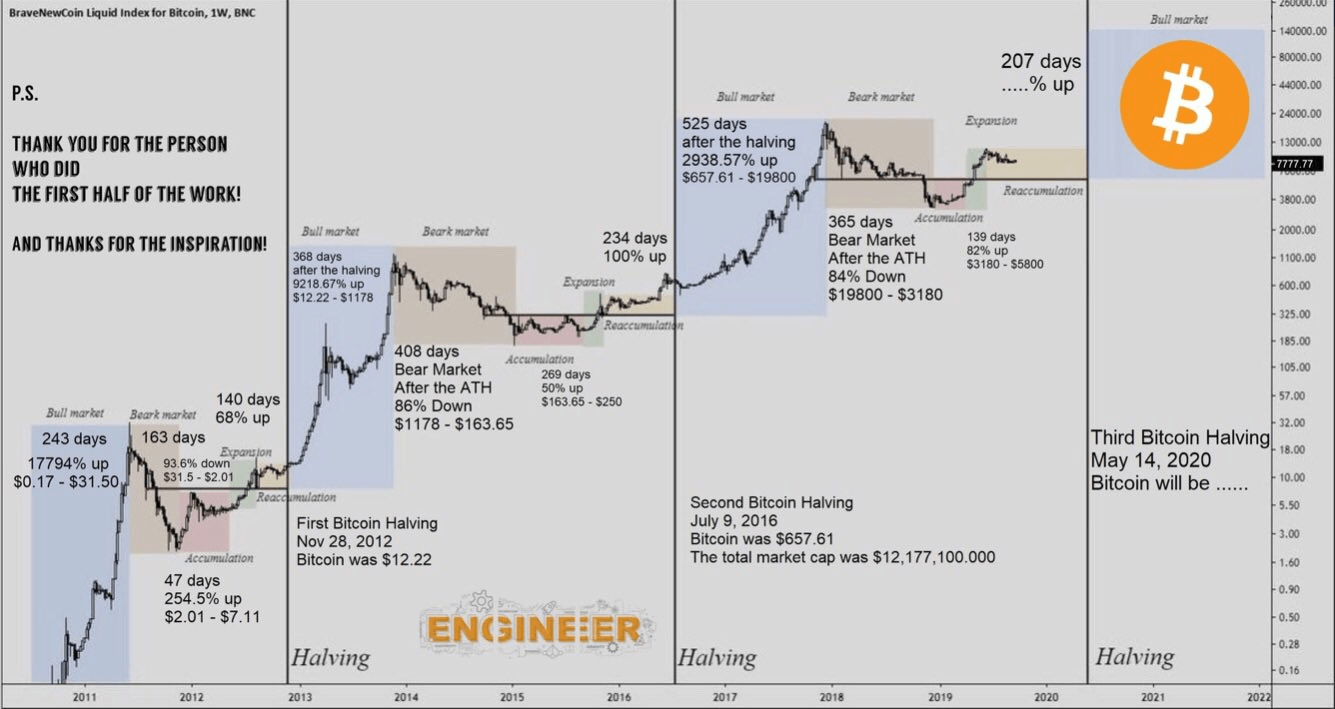 Could Bitcoin Halving already be priced in by 2020?

In recent weeks, however, a heated debate has flared up as to whether Bitcoin’s 3rd Halving has already been priced in. Analysts are increasingly divided on whether the event will affect the price of Bitcoin. Some analysts have recently said that traders should be prepared that the halving will not affect the price in any way.

A proponent of this thesis is Melem Demirors of CoinShares, a leading cryptocurrency investment and research company. She argued that the past two halvings cannot be compared to the current one because a robust derivatives market has been established. As a result, Bitcoin as an asset is decoupled from the supply-demand economy.

1/ there is a very real possibility the price of bitcoin does not go up after halving.

for the first time, there is a robust derivatives (futures, options) market for bitcoin. most firms looking to speculate on bitcoin will trade a derivative, not the underlying.

It becomes yet another backwater in the great game of global speculation. It becomes “financialized.” It becomes correlated to macro markets.

As a result, Skew explained that before such an event, there is usually a “kink” around the corresponding expiration date of the future. However, as Skew analyzed, this “kink” is missing. This leads the analysts to conclude that either the BTC options market has priced in the halving or that the market itself is highly inefficient.

➡️ the BTC options market believes the halving is already priced in

➡️ the BTC options market is itself very inefficient!

This is why the halving is not priced in

However, other analysts present powerful arguments why Bitcoin Halving cannot yet be priced in. Analyst Alex Krüger argued that there is no point in discussing whether Bitcoin Halving was included in the price five months earlier.

Discussing if the bitcoin halving is priced in or not a full *five months* before the halving takes place makes no sense. The date is too far off for the market to have any clarity about it.

This is consistent with Bitcoin’s historical data. The first two halvings showed a significant price increase only about 50 days earlier. Krüger further analyzed that the event cannot be priced in because nobody knows what the miners will do.

The ‘priced in’ argument is based on miner issuance reduction being fully deterministic (i.e. known). However, miners’ behavior is not so. Miners speculate with inventories, and accumulate. Supply may thus decrease at the halving, or even increase if prices are not high enough.

As early as December, the British entrepreneur and investor Alistair Milne stated that once the halving comes into effect, 50 percent of all newly mined Bitcoin will be absorbed by the purchase of two large companies: Grayscale through its Bitcoin Trust and Square through its BTC purchasing service. This does not include other exchanges and brokers such as Coinbase, RobinHood and eToro, Milne said.

After halving, ~50% of all newly mined Bitcoin will be absorbed by just two companies: GBTC and Square

… but tell me again how halving is priced in.

So there are both bullish and bearish arguments about the Bitcoin halving. However, if the demand for “real” Bitcoin after halving continues to rise, the event could reinforce the economic model of supply and demand for BTC and drive the price up in the long run.

Crypto News Flash does not endorse and is not responsible for or liable for any content, accuracy, quality, advertising, products, or other materials on this page. Readers should do their own research before taking any actions related to cryptocurrencies. Crypto News Flash is not responsible, directly or indirectly, for any damage or loss caused or alleged to be caused by or in connection with the use of or reliance on any content, goods, or services mentioned.
Bitcoin BTC Halving
Previous ArticleBitcoin: Mt. Gox case could come to an end after petition from former CEO
Next Article Did Wright get the Bitcoin keys? ‘Faketoshi’ files Tulip Trust III documents