The IOTA community is known for its inventive spirit, which is also actively supported by the IOTA Foundation. In this sense, the IOTA Foundation and eCl@ss organized the Marketplace of Devices hackathon to promote the development of innovative solutions using the IOTA Industry Marketplace. The aim was to develop an open source solution that uses the Industry Marketplace to “create value, explore new business models and/or building blocks in response to the competition themes”. The winners of the hackathon have now been announced via a tweet.

Congratulations to all the winners of the #Marketplace of Devices contest with @Hacksterio & @eClassStandard. Check out the 3 winning projects and the runner ups at https://t.co/Izi3mVH4V3. You can still submit your projects to the #IOTA hub on the Hackster platform. pic.twitter.com/Z8ZpDe5rly

The first place went to Mithun Das, who developed a proof of concept for an Industry 4.0 parking marketplace where machines negotiate and consume service without human interaction. As Das explains, by 2025 there will be 8 million self-propelled cars on the roads, which will require a sustainable system of how they can communicate with each other by indicating which garage is available and making reservations within a given time.

In the solution developed by Das, a driver looking for a parking space sends a service request to the marketplace via the Tangle. Neighboring garages then send suitable suggestions for the request, which the vehicle can approve or reject. If the driver accepts the request on the vehicle’s dashboard, the fastest route appears on the screen.

On the other side, the garage is waiting for the arrival of the vehicle. As soon as the vehicle approaches the garage, the parking garage sends a payment request to the vehicle. According to Das, the project is a perfect blend of cloud computing and IoT, with all communication based on the REST and MQTT protocols:

Car dashboard calls REST API of SR wrapper (a python flask web app deployed on EC2 container) to initiate parking request. Wrapper then calls API of IOTA service requester deployed on another EC2 container. SR wrapper then listen for incoming request from MQTT and publish messages to MQTT which is consumed by car dashboard such as proposals, request for payments etc.

Second place went to a project that we have already presented at CNF, the prototype of a drone charging station that can supply electricity to drones or other autonomous machines for a payment. During the hackathon, the Open Marketplace team demonstrated the use case of a delivery drone, in which a drone delivers parcels from A to B.

The drone is (currently) a simulated drone, i.e. an application written in Rust that sends its location to the Tangle via IOTA Streams. The charging station is built with a Raspberry Pi and provides an API, where each station has a unique ID, a position and provides an energy price. Within the marketplace, drones can independently book a charging process, plan their route to the charging station and pay for the charging.

Third place in the Hackathon went to “Logistical”, a proof of concept for event management, which uses the Industry Marketplace to automate the trade of services specifically for logistics. By using Facebook events, the Industry Marketplace and IOTA, a “minimalist” approach to event logistics management will be created. The developer, Marcos Concon, describes the functionality as follows:

If we create an event on May 20th and we set the Call for Proposal 10 days before the Event starts, then a Request will be automatically sent to Providers on May 10th. All Event details at that time (i.e Number of attendees, Location, Dates & Price) will be used in the Call for Proposal.

Automation of rejecting or accepting a Proposal from a Service Provider based on your total budget allocated towards the event.

The flowchart below illustrates the solution’s workflow. 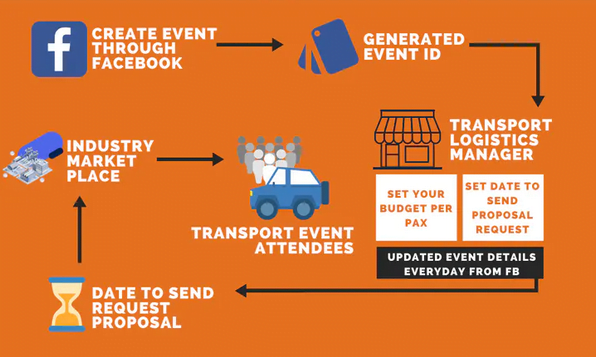