In a blog entry, the global association TM Forum announced that the IOTA Foundation was awarded during the Digital Transformation World Series 2020. The award received by the IOTA Foundation is called Business Impact Catalyst and is given to organizations for their significant contributions to accelerating digital transformation.

With more than 850 member companies globally, TM Forum is an organization that aims to “break cultural and technological barriers” in 4 sectors: service providers, technology providers, consulting firms, and system integrators. The organization operates in 180 countries and has the top 10 global network and communications providers. The IOTA Foundation joined the organization in 2020.

As part of the award, IOTA was part of the development of a Catalyst project with other members of the TM Forum. In this way, the IOTA Foundation and its partners in the organization worked on the creation of “smart solutions” and new cases that take advantage of IOTA technology with the aim of being replicated to “promote its adoption” and replication in other contexts. TM Forum stated:

The goal of this year DBM Catalyst was to explore how companies in traditional industries can be digitally transformed by further digitizing their products, services, and supply chain.

The result was the creation of a Digital Business Marketplace, in which companies select and orchestrate a number of integrated services, to deliver end-to-end solutions in vertical domains, such as Smart Grid, Smart Factory, Smart Theatre and Smart Logistic.

TM Forum presented a use case in a scenario where IOTA’s technology was used to “ensure the security and compliance of the hardware component infrastructure” in the location and custody of a chain. Thus, a “Smart Entertainment scenario” was “enabled” using an access point. The organization noted:

IOTA’s ledger and its ability to integrate with tracking devices, such as PING ASSETS and Zebra Technologies, has been leveraged to showcase how such a HW component’s journey will be implemented, while its compliance can be trusted in a multi-stakeholder ecosystem.

In addition, the Catalyst project studied IOTA’s tracking capabilities integrated into a solution with the Corda blockchain to “enable the deployment of smart contracts for property management” in a supply chain. The solution is called the IOTA Track and Trace Ledger, as shown in the image below. 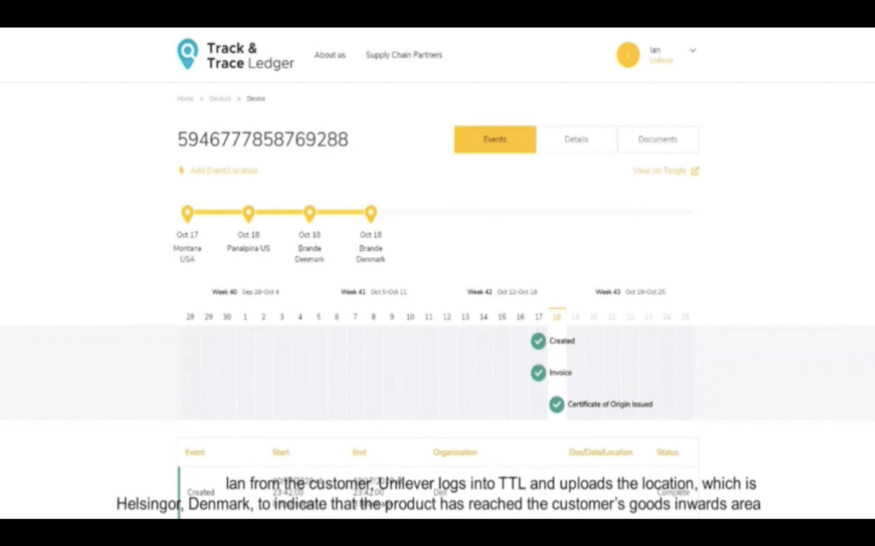 Two other scenarios explored in the IOTA-based project: Smart Factory and Smart Grid. The first one allows users to connect a wallet with smart robots to enable payments while using it in the digital business marketplace (DBM). In the second scenario, IOTA and the Agile Fractal Grid explored “decentralization” in a use case that used DL technology to share information and enable direct payments.