As the IOTA Foundation announced two weeks ago, the upgrade Chrysalis, which is intended to make IOTA ready for the use in the corporate environment, will be introduced in two phases. The first phase is expected to be released by the beginning of July and will take over the main burden of the migration as well as introduce far-reaching technical changes. These include the discontinuation of the current IOTA standard node software, IRI, and its replacement by Hornet and Bee.

The IOTA Foundation also recommended migrating from IRI to Hornet with the upcoming version v0.4.0. Hornet is an IOTA Ecosystem Development Fund supported community node written in Go and recently successfully audited by an external company. The announcement two weeks ago stated that a first alpha version is expected by the end of June.

However, it seems that development has been going faster than expected. The IOTA Foundation announced yesterday that Hornet v0.4.0 will be released next week. With the new version, the user interface of the node software has been significantly revised and improved. According to a tweet published yesterday, there will be a one-line APT installation, a new API for node status monitoring with a new tangle visualizer and faster node setup thanks to autopeering. In another tweet the IOTA foundation wrote:

The release of Hornet v0.4.0 is coming next week! This new version of our node software will be a lot easier to install, manage & run, and will make the IOTA network significantly more performant. Together with the community we’re right now running some final tests. Stay tuned.

In addition to the above mentioned advantages, the Hornet node software will bring another massive advance. As currently shown in the Comnet testnet, a community network of Hornet nodes, the IOTA network with Hornet, and still without Chrysalis components, reaches transaction rates of up to 600 confirmed transactions per second (CTPS – Confirmed Transactions Per Second). Holger Köther of the IOTA Foundation stated that Comnet yesterday processed 100 CTPS, a maximum about 600 CTPS, with a confirmation time of 10 seconds.

This is yesterdays #IOTA comnet with around 100 CTPS (max was around 600 CTPS) and 10s confirmation time pic.twitter.com/4PWhO6tkAz

Hans Moog, developer at the IOTA Foundation, added that this represents a 1000% increase in data throughput compared to the mainnet:

It looks like people are starting to get excited about the 1000% increase in throughput of comnet vs. mainnet at 10 seconds comfirmation time but let me tell you something: “You ain’t seen nothing yet …” IOTA is going to finally deliver on revolutionizing DLT.

It’s not even that many people spamming right now. This is not the upper limit and it’s even without the chrysalis changes.

Moog also presented the following statistics on TPS and CTPS, confirmation rate and the time between milestone on Comnet. 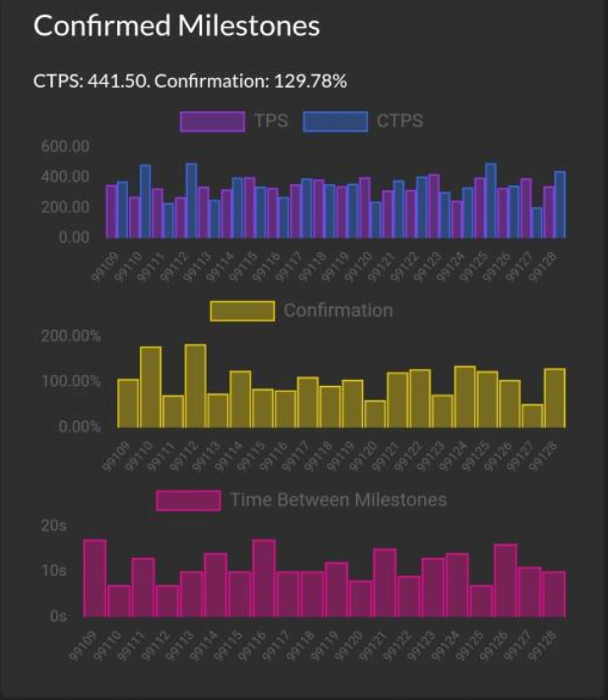