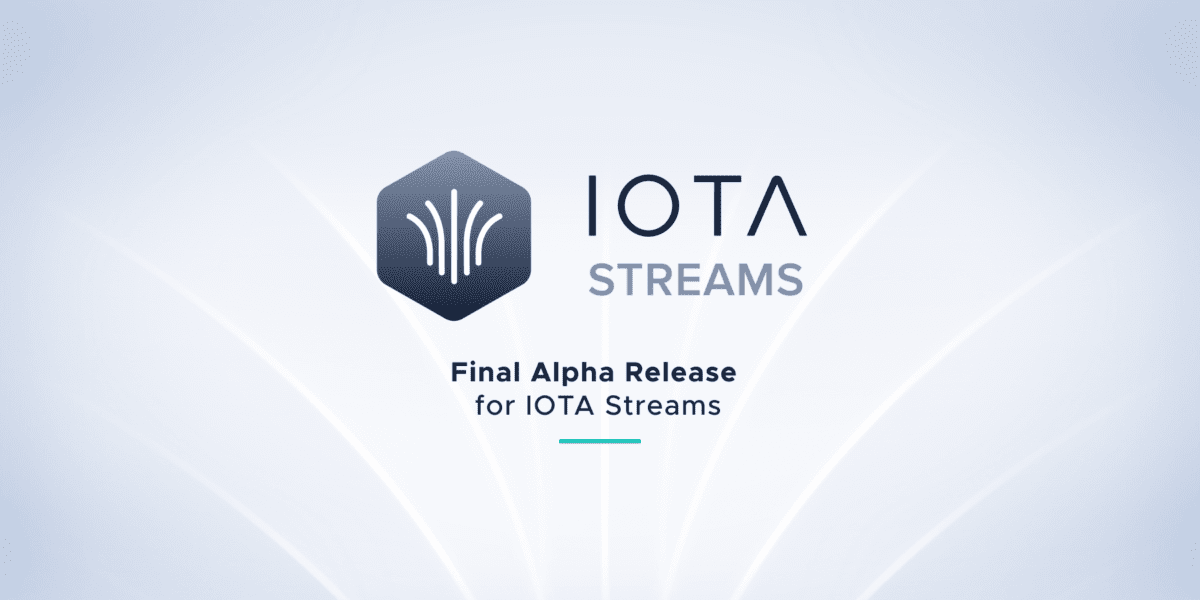 The IOTA Foundation today released the final alpha version for IOTA Streams, a framework that gives users control over the data collected from their IoT and connected devices. As stated in the announcement, IOTA Streams is designed to provide granular levels of data access and sharing capabilities directly in connected devices and to give back control to data producers over the data they produce.

Any data stream from a mobile device, IoT sensor, intelligent vehicle or industrial IoT solutions can be managed with IOTA Streams. For example, road, traffic and other data can be exchanged directly from a vehicle directly with your local Ministry of Transport. This data sharing could be promoted through reduced tolls, free public transport and discounts from utilities for private use, as described by the IOTA Foundation.

At the same time, IOTA Streams places a core competence on data integrity and security. Streams has been created to provide tamper-proof historical verification and a mechanism for arranging data transmitted over the Tangle. As a result, users could also sell their data through a data marketplace to gain more value from it. In addition, users who do not want to share their data could simply refuse to do so without being excluded from a platform. The IOTA Foundation sees great sociopolitical potential in the monetization of data:

Imagine, with the current economic climate, how big of an impact that value could bring to individuals and families struggling through the existing pandemic. With the increasing number of lost jobs from layoff and conversations around Universal Basic Income, necessary social impact, growing income inequality and more, being directly paid for your data could be a big part of the solution.

At the same time, the IOTA Foundation also points out that there must be “a necessary balance between decentralized technologies and semi-centralized processes” to increase efficiency. Otherwise, confidence in the technology and its application in a global society will be undermined. The IOTA Foundation explains this in concrete terms:

Key capabilities must be decentralized to ensure technology can be used for the betterment of humanity, in a trusted, secure, and open fashion. But not all data needs to be decentralized all the time. The point of IOTA Streams is that users, organizations, devices and systems can start to enable and utilize tamper proof data where it makes sense.

IOTA Streams will be released with Chrysalis phase 2

However, the production-ready version of IOTA Streams will not be released until Chrysalis phase 2, which is expected to be released later this year or early next year. In other words, IOTA Streams remains in alpha stage because the IOTA team “does not feel it is appropriate” for the network to introduce groundbreaking changes to the current limited benefits.

At the point that products are updated for full feature compatibility with Chrysalis phase two, they will then transition to Beta due to no longer having potential breaking changes on their roadmap to account for and will undergo their acceleration to full production readiness. This includes both IOTA Access and Streams currently.

As the new blog post further states, IOTA Streams also continues the IOTA Foundation’s approach by taking an “embedded first” approach, which will be expanded after Chrysalis. This is the only way to realize the reality of the “own your own data” movement.

This approach is highly important when it comes to the future of IOTA Streams, because to secure data from a device, structure it in an easily consumable fashion, and share it securely, requires these operations to be done on device, on prem, or on chip depending on the use case. By enabling these functions as an embedded integration, something important is created. The reality of the “Own your own data” movement can be realized.

With today’s release, the draft specification for IOTA Streams has also been made public. Once the integrations for Chrysalis phase 2 are operational, the specifications will also be submitted in response to the OMG Request for Proposals (RFP) for Linked Encrypted Transaction Streams (LETS). To encourage community development of community-based solutions, a tutorial for creating a messaging application was also published.