As reported by CNF, Cardano has made great progress in the past days and weeks with the launch of Shelley and the reaching of 1,000 registered stake pools. However, there is still a long way to go before Shelley’s main goal, the full decentralization of the Cardano network, is achieved.

While an important milestone was reached yesterday with the start of Shelley epoch 3 (actually epoch 211), when the first block was created by a community-driven stake pool, the new stake pool will be fully decentralized. However, with the start of epoch 3, only 10% of all blocks are validated by community-driven stake pools, while the federated nodes of IOHK and Emurgo continue to create 90% of the blocks. The quota of federated nodes will decrease with each epoch over time. In a new blog post, IOHK has now shed light on what the concrete timeline for the full decentralization of Cardano looks like.

The timetable for full decentralization of Cardano

In hat sense IOHK describes the goal of complete decentralization as follows:

According to IOHK, this process of decentralization will be a gradual process of collecting performance data and monitoring the state of the network in the process. Independently of this, however, from the beginning (d < 1) all rewards will be distributed to the stake pool operators, so IOHK has no incentive to keep the parameter high.

According to the now published schedule, the decentralization value will be set to d=0.8 in the next epoch, which means that 20% of the blocks will be created by community-driven stake pools. Afterwards, however, the reduction of d will happen much more slowly. With each epoch, the value will decrease by 0.02 until the value d=0.5 (epoch 228) is reached on November 1st. 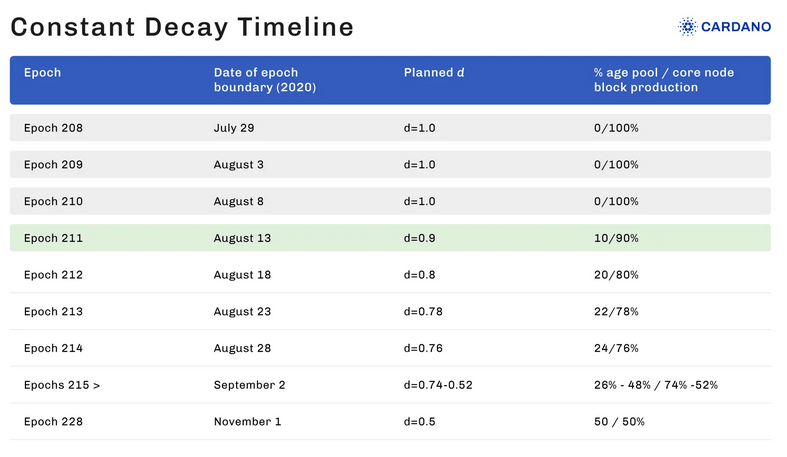 If d falls below 0.5, the community-driven stake pools will produce the majority of the blocks. The network will reach a turning point where decentralization is inevitable. As IOHK states, this will be another extremely important step:

Before taking this dramatic step, we will ensure that two critical features are in place: peer-to-peer (P2P) pool discovery and protocol changes to enable community voting. These will enable us to make the final push to full and true decentralization The recently announced Project Catalyst programwas the first step in this, concurrent journey to full on-chain governance.

Due to the enormous importance of this step, IOHK will “probably take a break” before the parameter drops below 0.5 to ensure that the two key conditions described above are met. Full decentralization is then planned by March 2021:

We will resume the countdown to d=0 at a similar rate, pausing again if necessary before finally transitioning to d=0 in March 2021.

Furthermore, the parameter k, the number of block-producing stake pools, will also play an important role in decentralization. The parameter has a direct influence on the profitability and the incentive to operate a stake pool. According to IOHK, the network will ideally stabilize towards a specific number of pools that are targeted.

The parameter k was initially set at 150 with the launch of Shelley and is to be increased in due course to take account of the considerable number of pools that have been created in the Cardano ecosystem since the hard fork.