According to a report published by Messari in mid-January on the crypto landscape in Asia, investors in South Korea prefer to trade XRP than Ethereum. As the report notes, South Korea is a center of the crypto industry in Asia. South Korea has the highest penetration of crypto investors, with one-third of all workers invested in crypto.

Furthermore, unlike neighboring Japan, cryptocurrencies not only appeal primarily to Millennials, but also across all age groups. As many as “8% of older residents in their 60s and 70s” support the market. Demand for exposure was so high that South Koreans paid “kimchi” premiums of up to 50% for Bitcoin in 2017 due to capital controls and up to a ban on serving foreigners.

The popularity led to the emergence of huge crypto exchanges such as Bithumb, Upbit, Korbit and Coinone. And on those exchanges, XRP remains the second most popular cryptocurrency after Bitcoin (BTC). According to Messari, this could be due to the fact that, unlike in the West, Koreans are less active in DeFi.

In turn, one reason could be that ETH and stablecoins are less popular in Korea, “except for Upbit’s large USDT commitment due to their partnership with Bittrex (which ended in 2019). Customers mostly hold BTC and XRP over ETH.” 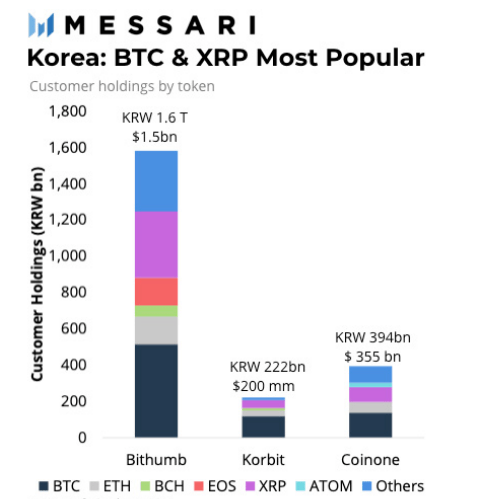 Other findings from the report on the spread of XRP

Besides South Korea, Japan is another important market for cryptocurrencies in Asia. There are 26 cryptocurrency exchanges in the country that have managed to obtain licenses. However, they are not allowed to list Tether (USDT), which is why Messari suspects that “investors in the country are turning to platform-based projects like XRP.”

As Messari also states, the “attitude of companies like SBI Group in Japan toward XRP is positive.” SBI, which partnered with Ripple back in 2017 and also has a board member at Ripple Labs, Yoshitaka Kitao, announced Japan’s first cryptocurrency fund this summer. It will be composed of 50% XRP, 30% Bitcoin, and 20% Ethereum.

In addition, SBI is known for supporting Ripple in its case against the US Securities and Exchange Commission (SEC). Messari stated that companies in Japan “rely on and prefer centralized systems.”

XRP also has a strong presence in Malaysia and the Philippines, where 80 percent of the population does not have a bank account. According to Messari’s study, between 80 and 85 percent of the country’s cryptocurrency volume is provided by financial firms that trade cryptocurrencies. The most popular pair in the country after BTC-PHP (Philippine Peso) is XRP-PHP.