Although RBI has appealed against the decision and a legal decision is still pending, which continues to pose a threat to the crypto industry, the Supreme Court decision has had a positive impact on many crypto market participants who are considering entering the Indian market. Two leading personalities in the crypto industry have currently shared their views on the matter.

Bitcoin for the unbanked

Sumit Gupta, CEO of CoinDCX, referred to the Supreme Court decision and said that investment in Bitcoin has increased since the ban was lifted. According to Gupta, Indians are looking for alternatives to gold, outside traditional assets. Gupta also added:

India, you know, it gives you access to 1.3 billion people to the blockchain ecosystem, right? That is roughly 20% of the world’s population… in terms of the data, I mean, India is definitely a hot market for this ecosystem, and it’s an untapped market.

In addition, Gupta said the change in the legislation will bring more investors to Bitcoin. Although he initially expects BTC to be an asset for trading and speculation, he also said:

(…) the trend will change over time and we’ll see a lot of invested interest coming in, including family offices who have not got exposure to crypto yet because of the regulatory uncertainty.

On the adoption of Bitcoin in India, Gupta said Bitcoin is perceived as an investment asset. However, as interest and adoption increases, Indian users could use Bitcoin as a medium of exchange and a store of value. In addition, unbanked users in India will also be able to benefit from the adoption of cryptocurrencies and their payment solutions, such as those offered by Ripple. As can be seen in the graph below, India has one of the highest numbers of unbanked adults in Asia. 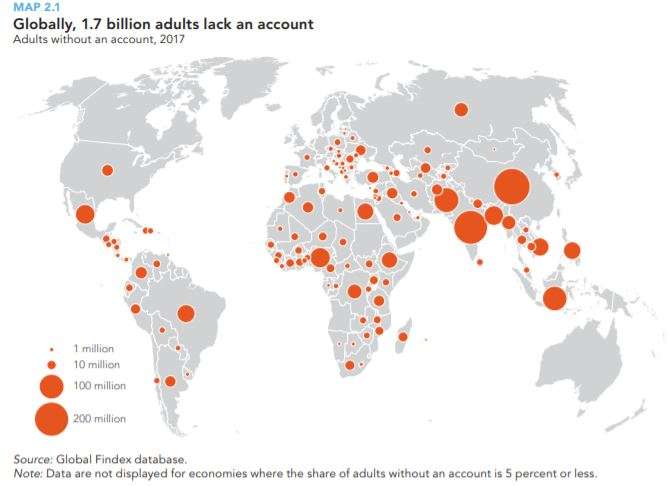 (…) the rate of growth of people coming into crypto is high and faster than equity markets, that clearly shows the huge interest levels among young Indian population to try crypto.

Another important industry personality who gave his opinion on the adoption of Bitcoin in India is Bitcoin investor Tim Draper. In a recent interview, Draper said the court’s decision came at an appropriate time. With the financial markets falling because of the expansion of COVID-19, Bitcoin could become a safe haven for users in India, Draper said:

Long term, I think this crisis will allow people to recognize that bitcoin is simply a better way to hold value and spend money than through our current banking system.

Draper expressed optimism about the decision and said he hopes to invest in crypto-start-ups in India. He also said that “the best ideas have prevailed” and added:

the benefits of Bitcoin and crypto over current systems will become apparent during this crisis.