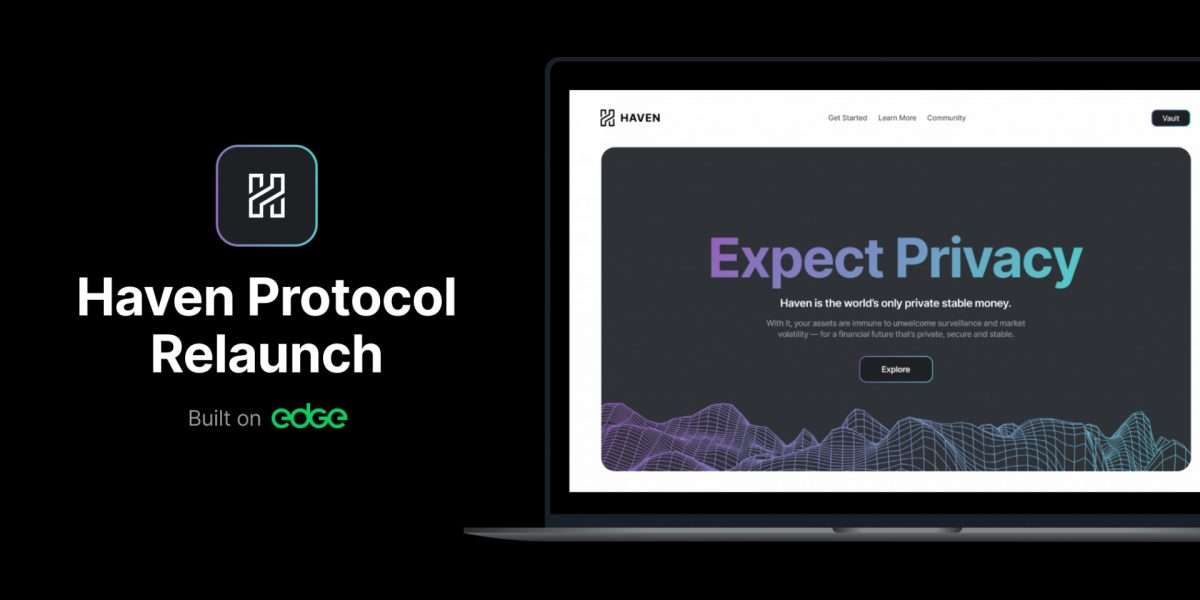 The team behind Haven Protocol , the world’s only private digital stablecoin, has redesigned and relaunched its website. By utilising Edge’s decentralised network , they are ready to welcome in the web3 era.

Their reimagined website — which features a new look, designed to appeal to a broader mainstream audience  — was built alongside their development partners in record time to support growth and adoption of a newly launched fork of the protocol – Haven 2.0.

Thanks to Edge Network — web3 infrastructure that’s powered by its own Blockchain — every line of code is decentralised. Edge is a revolutionary proposition that leverages the spare capacity all around us to generate lightning fast server and media delivery functionality, amongst other things — something which flies in the face of supermassive data centres like Amazon.

This future-facing aspect of the Haven site embodies web3 in the truest sense; it’s a nod to the possibility of an egalitarian society where corporations no longer have a stranglehold on the ability to generate wealth on the web. The Edge project team believe in this future wholeheartedly:

“There is a huge amount of spare capacity in the devices all around us, with the average laptop utilised to around 40% of its capability. Collectively making use of this capacity to drive the web takes power away from the handful of corporations that monetise our data day in, day out. Privacy is a human right, and web3 delivers it”, said Joseph Denne, founder of Edge Network.

Decentralisation aside, the relaunched website — which went live this week — symbolises Haven’s maturity as a technology. Whilst the privacy and stability ethos remains fundamentally the same, users will notice a higher fidelity across the board; in design, application of brand, UX, functionality and messaging. It’s clear that in addition to Haven’s own maturity, the team have sincerely acknowledged the maturity of consumers in the crypto and DeFi space as well.

“Haven is about bringing privacy to money. True privacy of data requires a decentralised network. Edge is to web3 what AWS is to web2. It’s the future of infrastructure, rebuilding the Web as it was originally intended to be, with privacy at its heart.”, said the Haven project team.

Doxing, anonymity, and data security will underpin a new wave of digital human rights, as yet untouched by global governments and regulators. In such a world, consumers are left with no alternative but to take ownership of their own privacy. As it stands, and with refinements and evolutions coming like they are, Haven Protocol is one of the best toolkits they’ll need to keep their assets safe, and away from unwelcome scrutiny. And now they are taking steps to embrace decentralisation too, prospective investors should find comfort. Haven is a proposition that practices what it preaches. And it’s gearing up for more than just a brand and website refresh; it’s gearing up for the next social epoch and a critical progression in the way wealth is defined.

Haven Protocol  is crypto’s only DeFi ecosystem of private, stable assets. Utilizing Monero’s world-class privacy tools, Haven gives anyone in the world the power to take back control of their money.

Haven offers synthetic USD (xUSD), Bitcoin (xBTC), Gold (xAU), Silver (xAG), and a range of global currencies that can be stored or traded all within a private Haven Vault. Haven’s “mint and burn” protocol uses the base currency, XHV, as collateral for assets on the network. All Haven addresses and balances are private by default and can never be seen or tracked by anyone except the Vault owner.

Edge is the infrastructure of Web3. A peer-to-peer network, powered by the blockchain and built using the spare capacity all around us. It brings data storage and computation as close to the point of need as possible. Run as a DAO, Edge was established to benefit everyone, not just the handful of corporations that currently run the cloud.