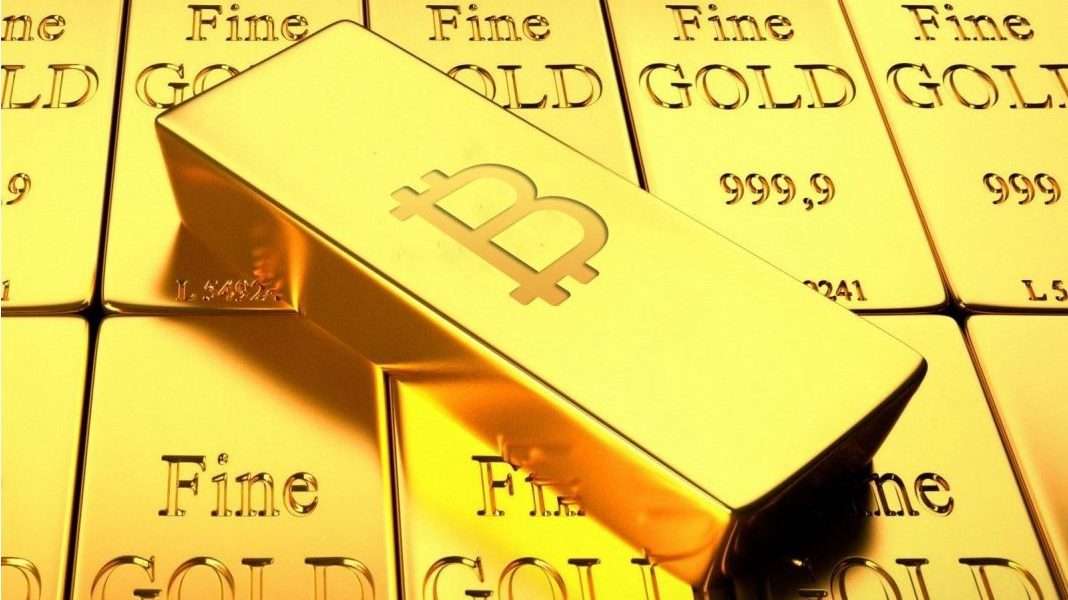 The world’s most precious metal, gold, has enjoyed an unchallenged position in the global economy, with a market capitalization of approximately 11 trillion USD. Despite the fact that gold was originally used to back currencies, several critics believe it was not well adapted to the modern economic system. Nevertheless, gold’s position today is indeed a testament to the asset’s strength.

The emergence and rise in popularity of Bitcoin over the last few years have triggered the speculation that Bitcoin might potentially replace gold in the future. While Bitcoin is still considerably nascent, it has managed to outperform gold. Valued at less than a cent during its early days, the digital asset managed to surpass the $64,000 mark, in mid-April. And while the asset is seeing a bearish trend, its popularity is constantly on the rise.

Additionally, Bitcoin has recently gained a great deal of institutional support, helping it cement its place as a financial asset. Due to the recent hype and the move towards mainstream adoption, many are drawing parallels between these two assets. In light of Bitcoin’s explosive rise and a global market cap of $1 trillion, the cryptocurrency is considered a serious competitor to gold. But while there are some similarities between these two, they also hold some fundamental differences.

A Secure Store Of Value

It’s no secret that Bitcoin is extremely volatile in nature and this characteristic has set many off the idea of Bitcoin ever truly replacing gold, an asset that is largely a stable store of value.

An example of how volatile cryptocurrencies are is the infamous bubble burst of 2017. Bitcoin was on a bull run during late 2017 and soared to a new record high of $20,000 per unit. Herds of would-be investors were seen swarming into the crypto space looking to get rich. However, just a few days later, the digital asset plummeted to rock-bottom, losing almost 30% of its value.

The latest developments also provide further evidence that Bitcoin is yet to become stable in order to be trusted as a store of value.

The overall volatility has historically proven that Bitcoin is a purely speculative asset, subject to fluctuations in market sentiment and news. In response to changes within the crypto space, a change in sentiment can cause the price of Bitcoin to go up or down significantly. China and Elon Musk have had a history of either driving the value up or down with their latest policies or tweets, in the case of Elon Musk.

Despite the highly volatile nature of Bitcoin, which may seem like a drawback to those investing in it, it is one of its most attractive qualities as risk-seeking investors prefer it over other investments to gain higher returns. The availability of trading platforms, such as British bitcoin profit, has indeed played a vital role in allowing many novices investors and traders to now try out their luck in the crypto space without the need to spend countless hours glued to the computer screen.

Gold contains none of these qualities, which, perhaps, makes it a less risky and more secure investment. To put it simply, when compared with Bitcoin, Gold is by far a more static store of value and it seems like digital gold still has a long way to go.

In terms of supply, Bitcoin and gold are both scarce assets. Miners can mine only a limited number of bitcoins. The 21 million limit of Bitcoin was imposed by its founding code, a conscious choice made by Satoshi Nakamoto, the mysterious creator of this digital currency.

As of today, roughly 19 million Bitcoin have already been mined, and the mining reward, which creates bitcoins, decreases by half every four years in accordance with the process of halving. As mining of Bitcoins increases, so will its scarcity, therefore driving its price upwards.

In the case of gold, it is not currently known when all of the world’s gold will be mined since it does not have a stated finite supply as Bitcoin does.

Historically, gold has been used for commercial purposes because of its anti-corrosive and conductive properties along with the long-established conventional view of how shiny is better.

As a result, gold has been used for a variety of items from jewelry to specialized dental applications. Because of this, gold has a significant intrinsic value and will likely continue to do so for a long time.

As for Bitcoin, its value lies in its capacity to serve as a medium of exchange for both online transactions and a feeling of belief that one day there may be a need to delegate financial trust and authority, and this is where Bitcoin can shine. Therefore, bitcoin is essentially worth whatever people consider it to be worth.