The introduction of the token for the decentralized stock exchange Uniswap Governance (UNI) has strongly influenced the crypto space. Anyone who has ever used the platform received at least 400 UNI, on September 16 of this year. The distribution of UNI was considered a positive development for Ethereum DeFi. However, a report by research firm Glassnode has questioned the transparency of the UNI distribution process.

According to the plan published by Uniswap the UNI token had a genesis supply of $1 billion that will be available over the next 4 years. Of that supply, 60% went to the Uniswap community, 21.51% to team members and future employees and 0.69% to protocol advisors. By doing so the platform aimed to be established “officially as a publicly owned and self-sustaining infrastructure”. Currently, UNI’s current supply is estimated at 130 million and the total or genesis supply should be release by the following schedule published by the Uniswap team. 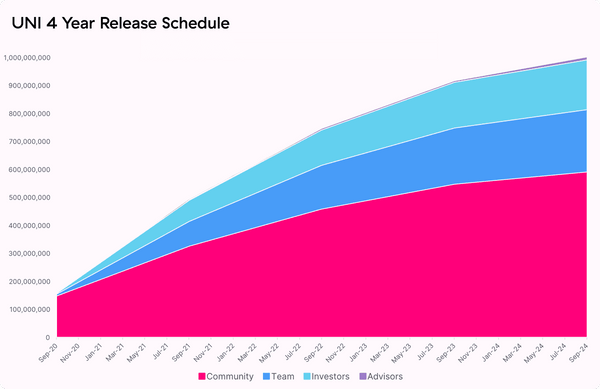 The report entitled “The UNI token: Is Uniswap really Decentralized?” states that the protocol has not adopted a truly decentralized governance model. The report questions the distribution shown in the image above and states that, in fact, the percentage of UNI that should be distributed within 4 years to the team and investors is “completely liquid”.

The report states with a higher concern that the tokens for the team and investors are currently stored at “regular Ethereum addresses without any transfer restrictions”. Specifically, these UNI tokens are divided into 43 Ethereum addresses. In addition, the report distinguishes that portion of the total UNI supply from the tokens intended for the governance treasury. The latter are located in smart contracts with a scheduled release date. Furthermore, Glassnode added:

It remains unknown who controls the keys to these addresses, but unless there is some other explanation, these tokens are apparently not locked up. It appears that the term “vesting” has been used very loosely by the Uniswap team, perhaps with the express goal of misleading community members into thinking the team/investor tokens will not be accessible until they vest.

Therefore, Glassnode concludes that the Uniswap team basically has administrative power over the decentralized exchange protocol. This gives them the ability to change or influence decisions that community members make about the protocol. The report speculates that these funds have been kept liquid to counter a possible coordinated attack by an entity with a large number of UNI (exchanges or whales). However, it maintains that security-related justifications for these actions are insufficient.

However, Glassnode analyst and writer of the report, Liesl Eichholz, has stated that the chances of the Uniswap team using the tokens to dump the UNI price or for some malicious action against the community is “extremely low”:

But in a community based on trustlessness and transparency, users shouldn’t have to gamble on this, even if the odds of malicious behavior are low. Why hasn’t the Uniswap Protocol team been more clear about what’s going on here?

At the time of publication, there are no statements from the Uniswap team regarding the report submitted by Glassnode.