GeoDB, a company specialized in the development of blockchain-based solutions in the field of geo data, has released the “Aid Squad” app yesterday. The app of the best start-up, awarded at the Blockchain Leadership Summit 2019, is partly based on the blockchain-based, big data protocol GeoDB, which gives value back to users for the generation of geo data. On the other hand, Aid Squad also uses the IOTA Tangle protocol to store user data in a publicly accessible and tamper-proof manner.

Aid Squad is a decentralized, globally available pandemic information platform, which is intended to help manage the current coronavirus as well as to prevent future epidemics. The app offers users the opportunity to anonymously share their symptoms and other personal data. The data is then used by GeoDB to create visualization tools and heat maps and to show the geographical distribution of users suffering from specific symptoms.

For example, the visualized map can be used to determine in which areas there is an increased number of infected people. In detail, the app works in such a way that users of the Android app have to share their location and then create a personal health record. The form includes data such as age, gender, location as well as information on symptoms such as temperature, cough, headache and the duration of the symptoms. However, only the location, the cause of the support and at least one symptom are mandatory.

After sending the data, all information is publicly accessible and tamper-proof, but at the same time anonymously stored on the IOTA Tangle.

As a reward for entering the data, the user receives “karma points”. The amount depends on the amount of information shared. Furthermore, the system quantifies the users’ “gratitude for each cause” by allocating AidSquad tokens.

This is an Ethereum based token that was created exclusively for the app. The allocation of the AidSquad token is done at regular intervals in proportion to the amount and quality of the submitted data:

Each snapshot has a certain number of tokens assigned, so the tokens of the snapshot will be distributed between the causes that have been selected by the users within the data included in the snapshot. […] Once every cause has been assigned with their tokens, the snapshot is signed and stored in IOTA.

The Android app has been submitted by the developers to the Google Play Store for review, but at the time of writing it was still awaiting approval. The following illustration shows the entire functionality of the system. 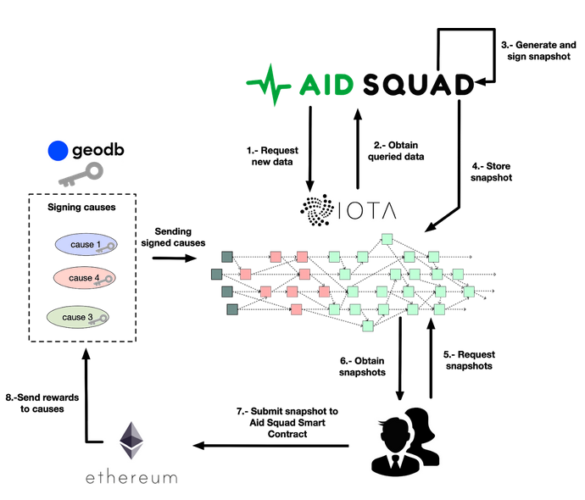