Contrary to the mainstream media headlines that Bitcoin did not pass the test as a safe haven, there are good arguments to stick to the narrative of Bitcoin as digital gold. As Binance CEO, Changpeng Zhao, also emphasized yesterday that the truth is nuanced. No one can expect Bitcoin to rise when the Dow Jones index crashes, or Bitcoin to crash when the Dow rises. In particular, the influence of the coronavirus as the trigger of the whole crisis cannot be ignored.

Regardless of this, the well-known analyst Willy Woo has already observed a first step in the decoupling of Bitcoin from the stock market. To this end, Woo compared the development of the S&P500 and the gold price during the global economic crisis of 2008 with the current development of the S&P500, gold and Bitcoin. As can be seen in Woo’s chart, the gold price also initially fell in 2008 in line with the stock market. 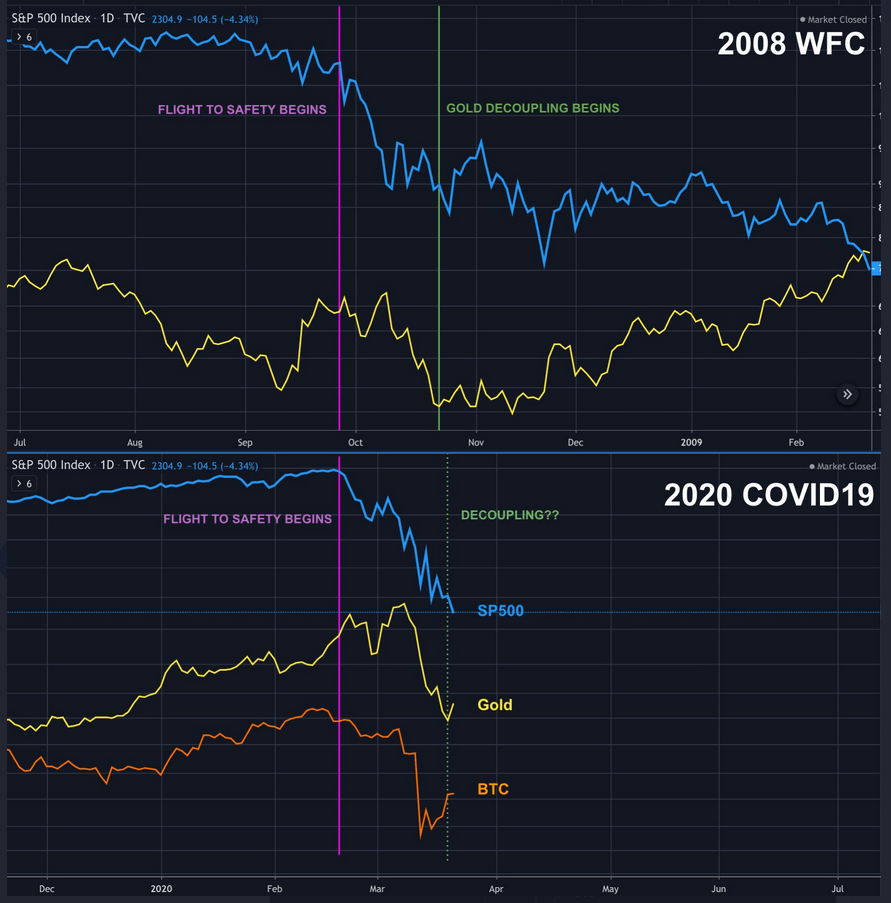 During the financial crisis of 2008, traders massively exited risky positions and hedged their assets in fiat currencies (USD, EUR, etc.). Not until the initial panic in the market subsided and the peak of fear was passed, did the gold price begin to decouple from the stock market. As the chart shows, the gold price initially moved downwards in 2008 in line with the stock market.

This was followed by a phase of decoupling, in which the gold price showed a slight upward trend and freed itself from its dependence on the stock market, before the price rose massively. Gold and Bitcoin could currently be at the beginning of this phase, as Woo derived from his chart on Twitter:

Decoupling of safe havens from equities showing hints it may have begun (i.e. when BTC and Gold go bullish). We’ll have more confirmation in a week.

After the Bitcoin price suffered another setback last Friday, March 20, falling from around USD 7,000 to temporarily USD 5,700, BTC is currently showing strong momentum again. Within the past 24 hours the price has climbed from 5,800 USD to 6,600 USD. Bitcoin thus defied the predictions of some analysts that the support of USD 5,400 would not last.

Interestingly, gold and silver prices also rose by around 3.9% and 2.7% respectively in the last 5 days. The S&P500, on the other hand, saw a further drop of 2.9% yesterday and 10.9% over last week, which may confirm Woo’s thesis. Market participants who have recently exited their equity positions may now begin to look for shelter in gold, silver and Bitcoin. However, as Woo also noted, the next few weeks still have to confirm his thesis conclusively.