Asset management firm, Fidelity Digital Assets, has recently published a report analyzing the stock-to-flow valuation model created by Plan B. The report was created as a way to examine the reasons that attract interest in Bitcoin as an investment. As Fidelity Digital Assets notes Bitcoin is increasingly integrated in traditional investment portfolios.

In this sense, the report points out that Bitcoin has two characteristics that make it a store of value. Firstly, Bitcoin is a scarce economic good and therefore in the long run a means of protection against “real loss of value”. This is now emerging more strongly than ever as companies like MicroStrategy migrate to Bitcoin to protect themselves against the Federal Reserve’s inflationary policies.

Another feature that makes Bitcoin a store of value is that its scarcity at the time of its inception was built into the protocol and cannot be changed. Moreover, Bitcoin’s monetary policy is enforced in a decentralized manner, transactions are checked decentrally by network users, so there is no central power that can change the fundamental design.

Bitcoin as an up-and-coming store of value

Fidelity Digital Assets further states that Bitcoin’s low adoption rate still doesn’t allow it to have the status of store of value. That’s why the report compares Bitcoin to the early days of Facebook when it had only 50 million users. However, the asset management firm finds it an “interesting juxtaposition” that Bitcoin’s halving that occurred in May has coincided with the unprecedented level of monetary stimulus that has been implemented to mitigate the effects of the coronavirus pandemic.

In that sense, the halving, decentralization and scarcity and other features mentioned above make Bitcoin the second most resilient asset after gold, according to the stock-to-flow ratio. This metric is used to quantify the “hardness” of a commodity. Fidelity Digital Assets points out, highlighting Bitcoin’s potential as a store of value in times of crisis and its potential to continue to appreciate in the current economic situation:

Commodities with a stock that is difficult to double due to a low rate of production relative to existing supply have. historically served as superior stores of value (…). Gold, the most resilient store of value through the ages, has the highest stock-to-flow ratio, followed by bitcoin (today) and silver. Following the recent halving (May 2020), the gap between the gold and bitcoin ratio compressed. Bitcoin’s stock-to-flow will eclipse that of gold following the next halving (2024).

The graph below is based on the valuation model based on the Stock-to-Flow created by the analyst Plan B. According to that model, Bitcoin will reach a price of $1,000,000 by 2025, in its next upward cycle. 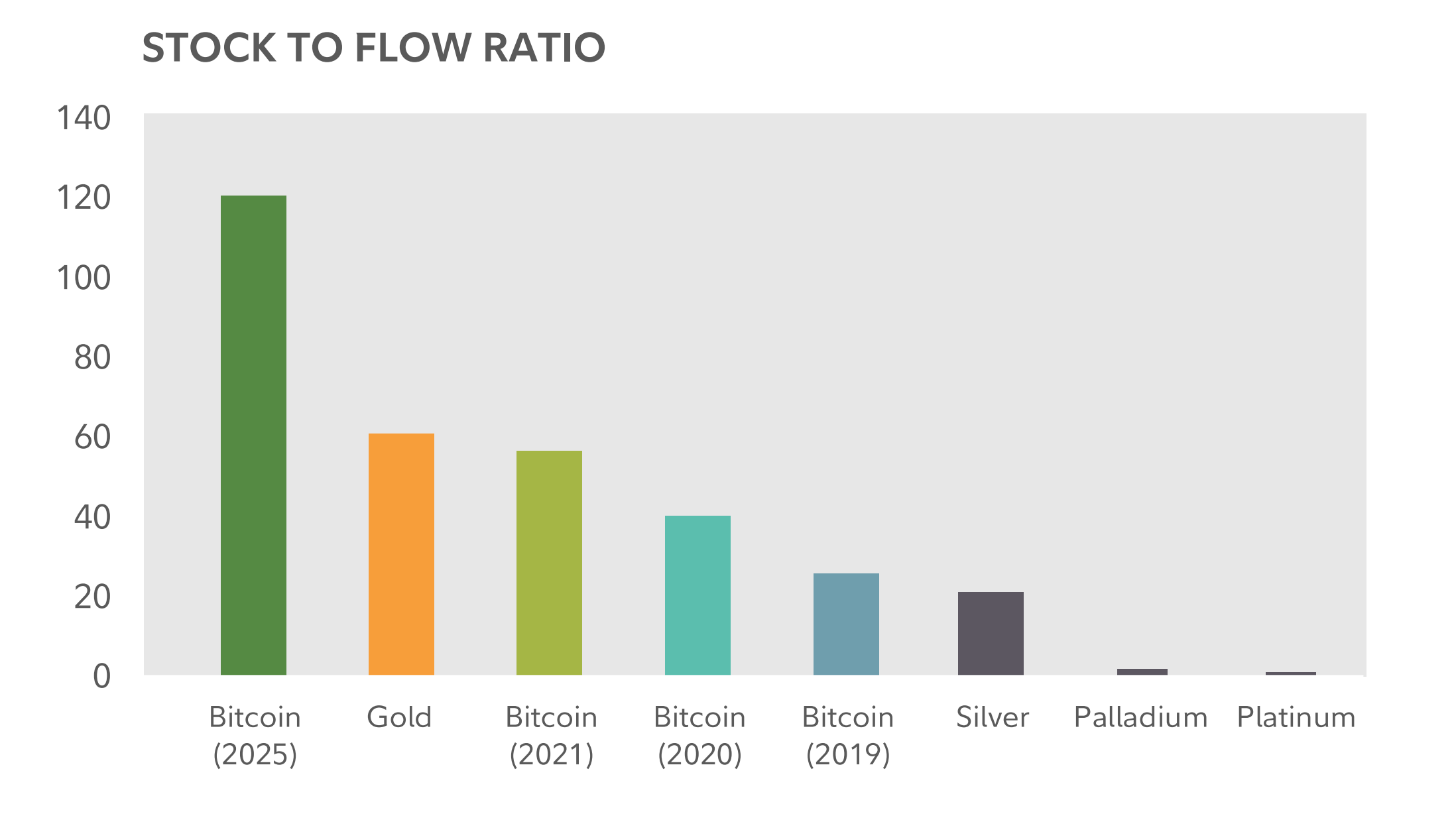 While it’s true that price has followed this stock-to-flow model with high correlation, the relationship may be spurious and does not take into account the requisite demand for price appreciation. 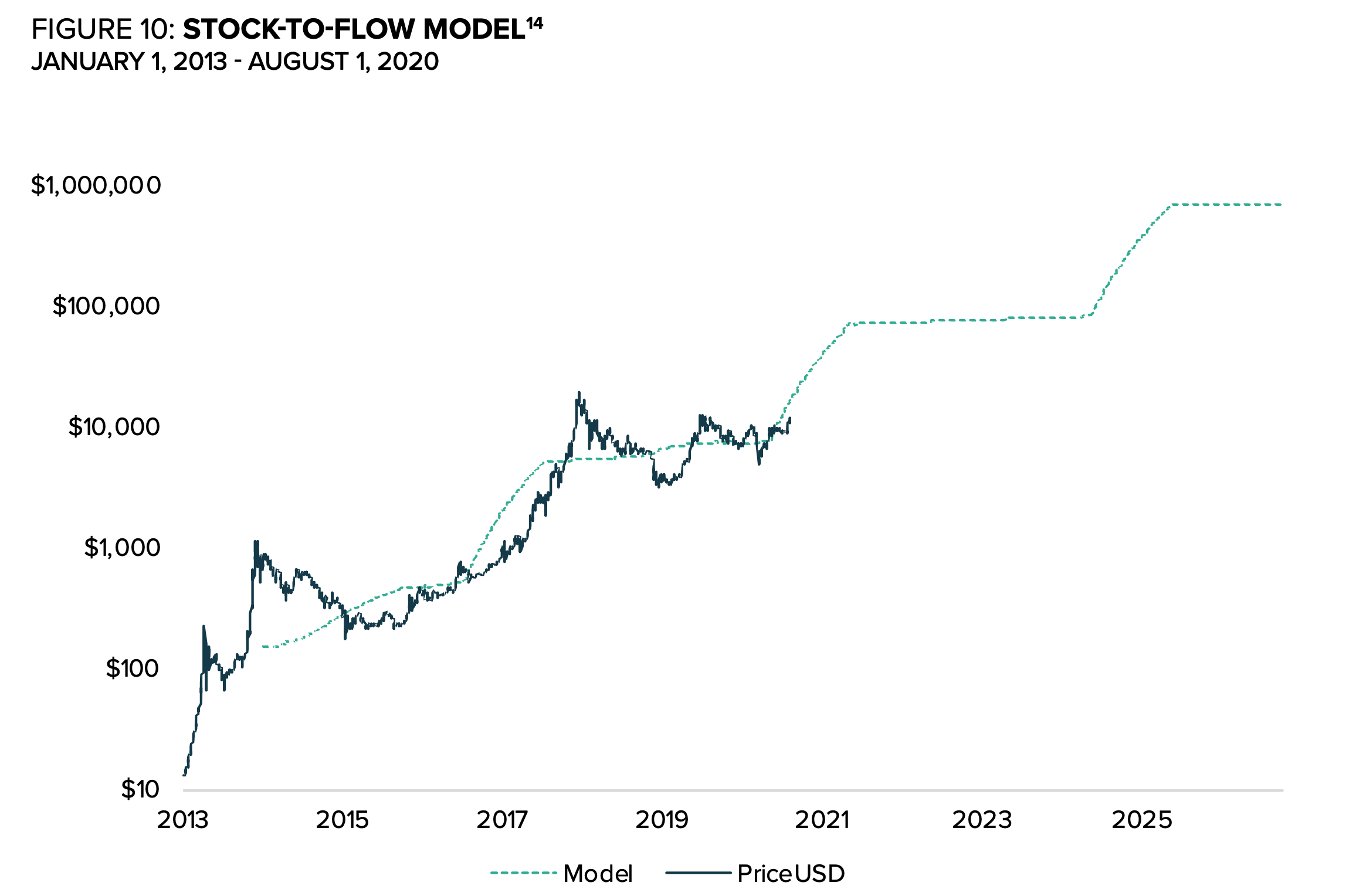