The data from the DeFi pulse show that the DeFi sector of the Ethereum has reached a new milestone. At the time of publication, 2.15 billion dollars are bound in the various protocols that make up the ecosystem. As shown in the figure below, the DeFi sector suffered a sharp decline in March, on “Black Thursday”. When prices in the crypto market collapsed, the DeFi sector also crashed. Since then, however, the DeFi sector has shown a 60% rebound, with the latest surge being strongly driven by Compound with a dominance if 31.69% in the market. 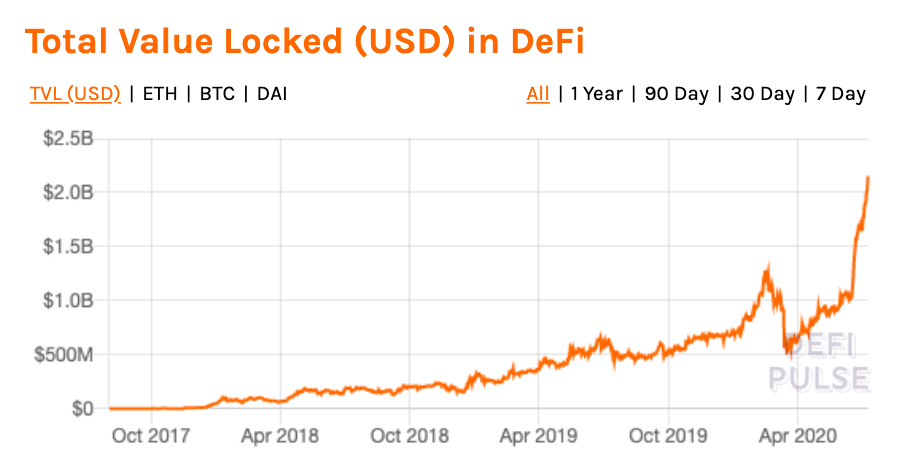 The total value locked (TVL) is twice the maximum it reached at the beginning of the year, before the flash crash in March. Moreover, it is the first time the DeFi market exceeds $2 billion since its emergence in October 2017. One of the main reasons for the sector’s growth is the arrival of new investors. The business model and profits offered by some protocols in the sector are attractive to new investors, as Messari researcher Jack Purdy stated:

Currently there’s ~$25 million of tokens being distributed every month through yield farming opportunities on DeFi. It’s proven to be an incredibly effective mechanism for building liquidity.

The researcher compared the success of the DeFi sector with the case of the company Jet.com. He said that both cases show how the creation of incentives, in addition to adoption, are crucial factors for the growth of the market and the ecosystem.

In June this year, the launch of the Compound protocol’s COMP token marked a turning point for the DeFi sector. The incentives offered by the platform led to a significant increase in demand for the COMP token. As a result, the DeFi sector experienced a boom that led to the referred increase in the TVL.

At the time of publication, according to data from Kyber, investors have staked 11,898,152 KNC, which represent around 19 million USD. By offering incentives for the participation of KNC token holders, Kyber seems to be making a bet on a model similar to Compound’s.

KNC holders can stake their tokens on the KyberDAO and govern the protocol by voting on important proposals and parameters, while earning rewards (in ETH) for their efforts. Any KNC holder can contribute to Kyber’s development by participating in the KyberDAO.