On the heels of its all-time high, the price of Ethereum has skyrocketed from $90 to over $1,200 in one year. Thus, the break above the $1,450 mark, the all-time high, seems imminent. However, former Goldman Sachs employee Raoul Pal believes the rally won’t stop there and has made a highly bullish prediction.

In a series of tweets, Pal stated that the fundamentals and growth of Ethereum are the same as Bitcoin 5 years ago. Pal relies on “Metcalfe’s law” for this thesis to set a target price of $20,000 for Ethereum in the current bullish cycle. The law states that the value of a network is proportional to its size and number of users.

Bitcoin has seen a similar rise from around $1,000 to $20,000 in the 2017 bull market. In that sense, when comparing the fundamentals of the cryptocurrencies, Pal believes that ETH “looks the same as Bitcoin” and can even surpass it in terms of growth in market capitalization and number of active addresses.

But ETH market cap is growing faster than BTC at the same point ( from first 1m active addresses) pic.twitter.com/qi46dAhU9F

The price structure of Bitcoin and Ethereum, according to Pal, fits “perfectly” as do the indicators of adoption and economic behavior. The former Goldman Sachs employee concluded that BTC and ETH only differ in their narrative and added:

ETH will outperform Bitcoin by almost 2 times driven by the same mechanism – a great narrative – the platform for programmable money and, obviously, Metcalfe’s law. This should also stop the “it’s a shitcoin, it’s volatile, it’s unstable, it’s not safe for the little guy” narrative.

Yeah, ETH might well go to $20,000 this cycle… (exact same as BTC last cycle, by market cap ETH will be bigger) pic.twitter.com/LC8VffAqwh

When will we see a new Ethereum all-time high?

If ETH hits over $25k in this cycle I’m going to buy an island and invite you all.

The trader believes that the boom in the DeFi sector will lead to an increase in ETH’s price, once it reaches its all-time high. Currently, the DeFi ecosystem registers a total value locked (TVL) of $22 billion after a sustained rise during the last week. In that period the TVL has added $7 billion, according to DeFi Pulse data. Rager said:

$ETH gave mega buy in-opportunities as it tested a key weekly level near $310 not only once but twice in August. Now Ethereum is just a few small % from smashing its all-time high. And from there I think we will go a lot higher in 2021 along with the defi boom.

Another indicator that the bull market is showing signs of continuation is the reduction in selling liquidity on the trading platforms. As the chart below shows, ETH’s reserves have been reduced to their lowest levels in a little less than a year. 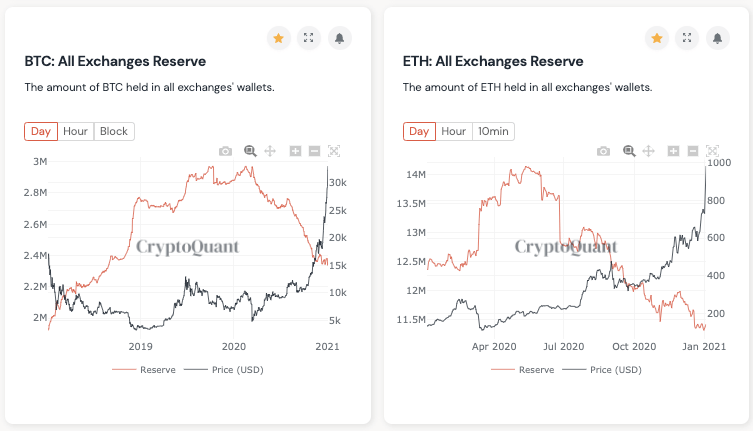 The ETH outflow from centralized exchanges may be being diverted to the DeFi protocols and the Ethereum 2.0 deposit contract. CryptoQuant’s CEO, Ki-Young Ju, also believes that the “illiquidity of the market” will be a catalyst for ETH to continue to rise in the long term.