In March of this year, the inventor of Ethereum, Vitalik Buterin, published a roadmap on the development of Ethereum. Buterin outlined the most important projects for the platform over the next 5 to 10 years, from his perspective. At that time, the community expressed criticism because of the complexity of the scheme presented, claiming that the majority of users would not understand it.

A few days ago, Buterin published a modified version of the roadmap. At first sight, it is possible to distinguish that changes have been made that simplify its understanding. Now, it is much easier to visualize that each project has an independent development and it is possible to know how advanced is each of them. Previously, a project’s development time was ambiguous and only said “most likely to come soon”.

As can be seen in the image below, the new roadmap eliminates the distinction between phases 1 and 2 that follows the deployment of the with Beacon Chain phase 0. In addition, each component has received a progress bar that shows its implementation proximity. In the section on phase 0, it is possible to see that Eth2 is in an audit period. Currently, modifications according to the results of these tests/audits are being made. Also, sharding is being prepared for the rollout. 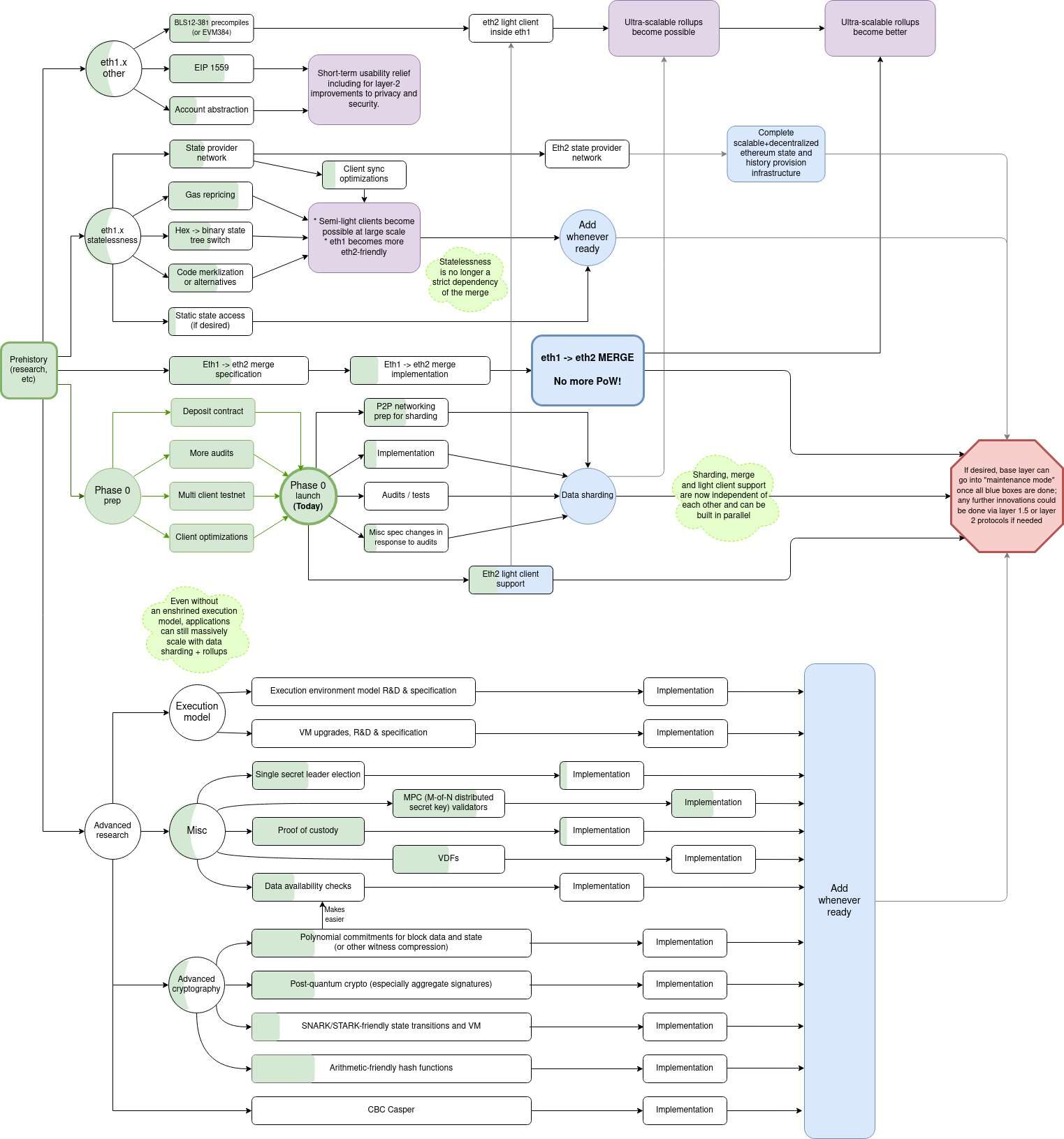 There are also no specific implementation times for each project in the roadmap. This has been simplified with a section that says “will be implemented when ready”, emphasizing for a better expectations management. Ethereum’s inventor said:

The roadmap I made back in March updated with (very rough and approximate!) progress bars showing what has been done and some of the recent tweaks to the roadmap itself. A lot has been accomplished, but still a lot remains to be done!

The successful launch of phase 0 of the Ethereum 2.0 has been a highly celebrated event by a part of the crypto community. The Beacon Chain deposit contract currently records 1,468,225 ETH locked, estimated at an value $846,402 million. Data from the Ethereum Foundation indicates that 32,155 validators are active with a 99.18% time holding. ConsenSys developer Ben Edgington stated the following in an update on the progress of Eth2:

It’s been a wonderfully dull eleven days since genesis: apparently it all just works. The genesis event went as smoothly as a Sade album.

Edgington stated that the biggest incident they have had is with validator penalties or “slashing”. If a validator disconnects his node, he is penalized with 0.25 ETH of the 32 ETH he has locked into the deposit contract. However, the developer indicated that most of the incidents are due to bad practices by users.

Synthetix founder Kain Warwick reported his experience with penalties via Twitter after having some trouble with the Geth client. Warwick referred to a publication by Buterin stating that validators were not required to be online 100% of the time to receive rewards and that penalties are “quite forgiving”:

I am pleased to be able to confirm this is the case. Following my offline penalties (I won’t call it slashing again I promise) incident this week, I’m now up again by around five thousands of an ETH.