After gaining momentum over the past week, Ethereum has reached a new all-time high at $2,143. At the time of publication, ETH was trading at $2,101 with a gain of 5.1% on the daily chart.

Along with the price surge came an increase in on-chain trading volume, as observed by research firm Santiment. On the heels of a seven-week-high, ETH managed to cross the $2,000 mark. Overall, the price development was preceded by an increase in daily new addresses and a reduction in ETH supply on exchanges. 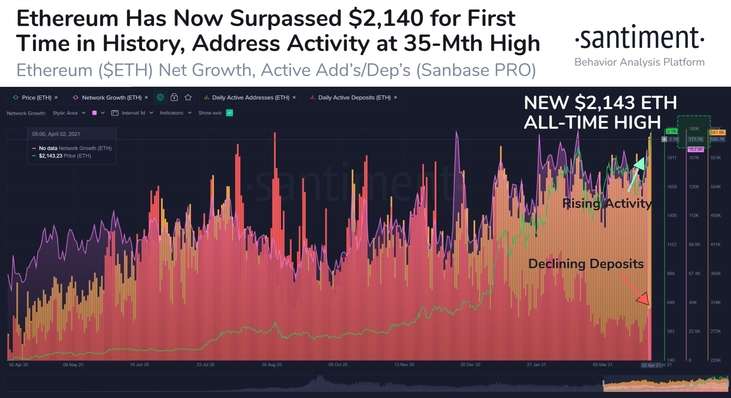 Santiment indicates that a portion of ETH flowing out from exchanges is going to the DeFi sector and cold wallets. According to the NVT metric, used to measure the “health” in a token’s circulation, Ethereum is in a semi-bullish or yellow-green zone in the chart below.

The firm also noted that sentiment on the social network Twitter – according to Weighted Social Sentiment (WSS) – was at its most negative level of 2021 before the new ATH. This, the research firm said, is historically bullish for a cryptocurrency’s price, as a high level of bullish sentiment usually precedes a price decline and can signal a trend reversal.

The crowd is in disbelief, and this is a bullish indication.

However, the metric has returned to a slightly positive area, as shown in the image below.

? When history is made on the 2nd largest #crypto asset, it's worth a comprehensive look at which metrics led to #Ethereum's #ATH being broken. Read how exchange inflow, social volume, dormant tokens, & others should continue to be major price predictors. https://t.co/IEV0Udp8Rp pic.twitter.com/fsCLf5WuPJ

According to IntoTheBlock data, Ethereum’s fundamentals look “strong” and support an extension of the rally. This blockchain continues to be one of the most widely used, yesterday it recorded a 6+ month high in its number of transactions with 1,31 million.

Additionally, the firm recorded an increase in the use of the stablecoin USDC. About $20 million in USDC was settled on a daily average on Ethereum during 2019. It has now settled as much as $3.8 billion daily in March this year. In parallel, a record 55.64 million addresses were reported, all at 100% in profit. Of these, 652,000 addresses are active.

Perhaps, the most important factor in understanding Ethereum’s rally is the market’s ongoing supply crunch. A large portion of ETH supply has entered the Eth2 deposit contract where it will remain “locked up” for at least two years.

According to Etherscan, currently 3.6 million ETH are allocated to this contract with an estimated value of $7 billion. In the coming months, EIP-1559 will be introduced with the London hard fork, modifying the blockchain’s fee model and burning some of the cryptocurrency’s supply. Both factors could be decisive in 2021 to further amplify the supply crunch and contribute to ETH appreciation.