As we have already reported, there was considerable concern among some industry experts whether December 1, 2020 could actually be held fo the start date for Eth 2.0. Initially, there was a rather sparse involvement in staking for Eth 2.0 and the launch of the Beacon Chain. However, in the last three days more and more companies are participating, such as the investment company IBC Group from Dubai, which paid almost 22,000 ETH into the deposit contract.

According to the current data from Dune Analytics, at the time of writing 274,944 ETH of 524,288 ETH are in the deposit contract, which must be reached to launch Ethereum 2.0. In the period from November 20 to November 22, a total of more than 130,000 ETH have been deposited, so if the level continues, the target could be reached by November 25. It is remarkable that according to a report of the blockchain specialist Camila Russo, 3 whales are responsible for more than 25% of all stkaed ETH.

In addition, the Bitcoin Trading Agency from Switzerland, Bitcoin Suisse, will also contribute 71,891 ETH to ensure the launch and thus support the Ethereum ecosystem. According to Mikael Bondum, this amount will be collected by midnight on November 24, 2020 and then paid in the Deposit Conctract. The company is also considering offering a secondary market through this interface, but nothing is yet ready for discussion:

As long as transferability to Ethereum 2 is not activated, the ether is blocked. We are checking the possibilities of the secondary market, but nothing is certain.

The required amount of 524,288 must be fully paid 7 days before the launch on December 01, by November 25, 2020. Otherwise, the launch must be postponed. However, Ethereum founder Vitalik Buterin recently expressed his confidence in Reddit during a Ask-Me-Anything session.

Trader and analyst George said on Twitter that ETH could rise relatively quickly to $850 if the next resistance at just under $600 can be overcome. On the following chart he shows that ETH could reach a new local high in 2020, as above $600 no sell order or other resistance could stop the price at first. He also advises his followers to wait until ETH has overcome the resistance and only then to open a position in ETH.

Buying here makes little sense to me. I’d wait for reaccumulation around former resistance or for a break above range mean / weekly supply to target $850 next. 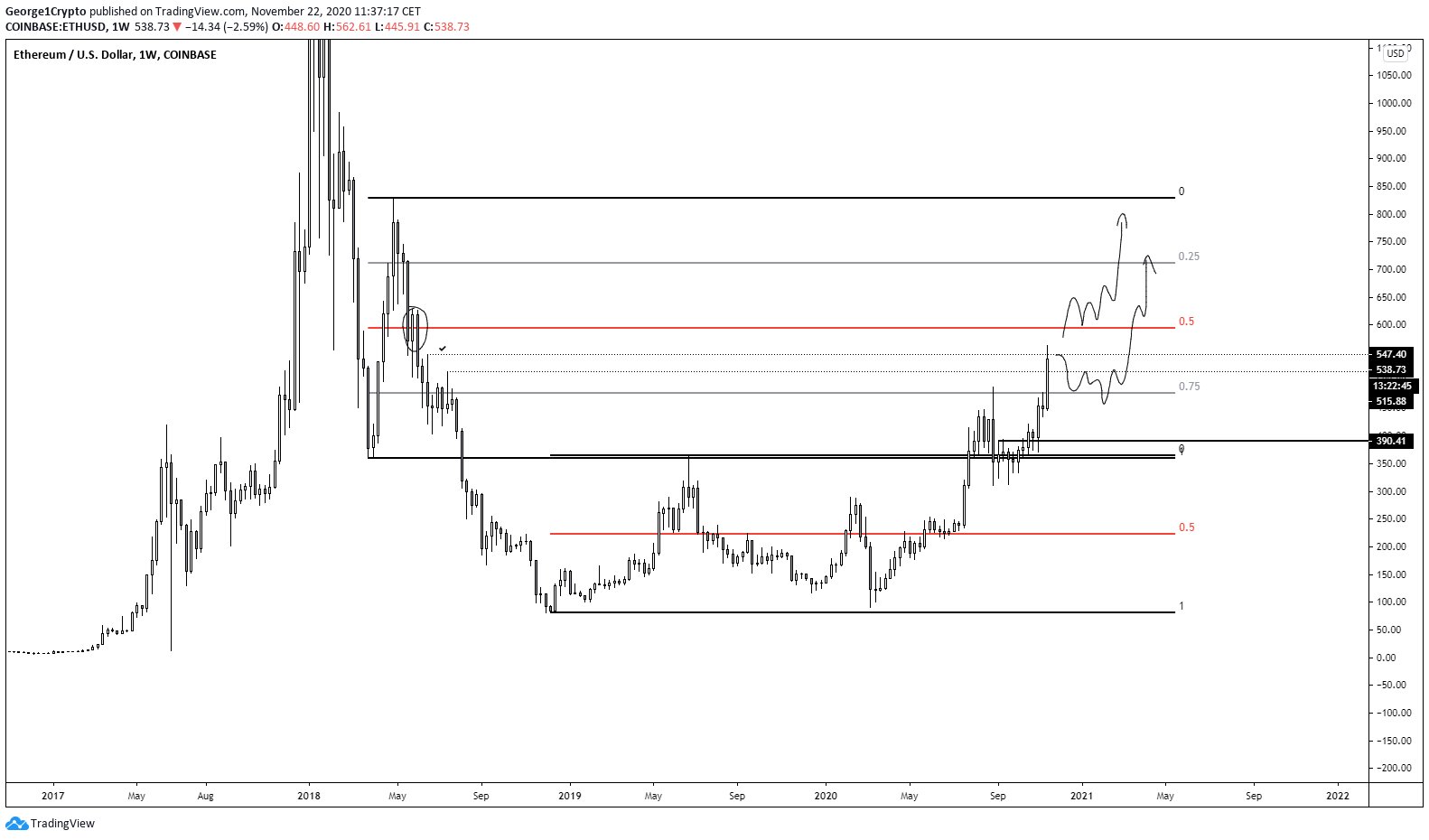