The congestion of the Ethereum network continues to be a problem. During May, congestion brought an increase in the price of gas. Analyst Ceteris Paribus reported that Gas prices on the Ethereum network have quadrupled since the end of April. The average gas price has varied between 30 and 40 Gwei in this period. In comparison, the price of Gas in times of stress previously recorded has been between 10 and 15 Gwei.

According to Etherscan, the average gas price during May was at 30 Gwei, but it almost reached 50 Gwei at the end of the month, as can be seen in the graph below. Nevertheless, the value is still far from the 85 Gwei that Gas reached during March. 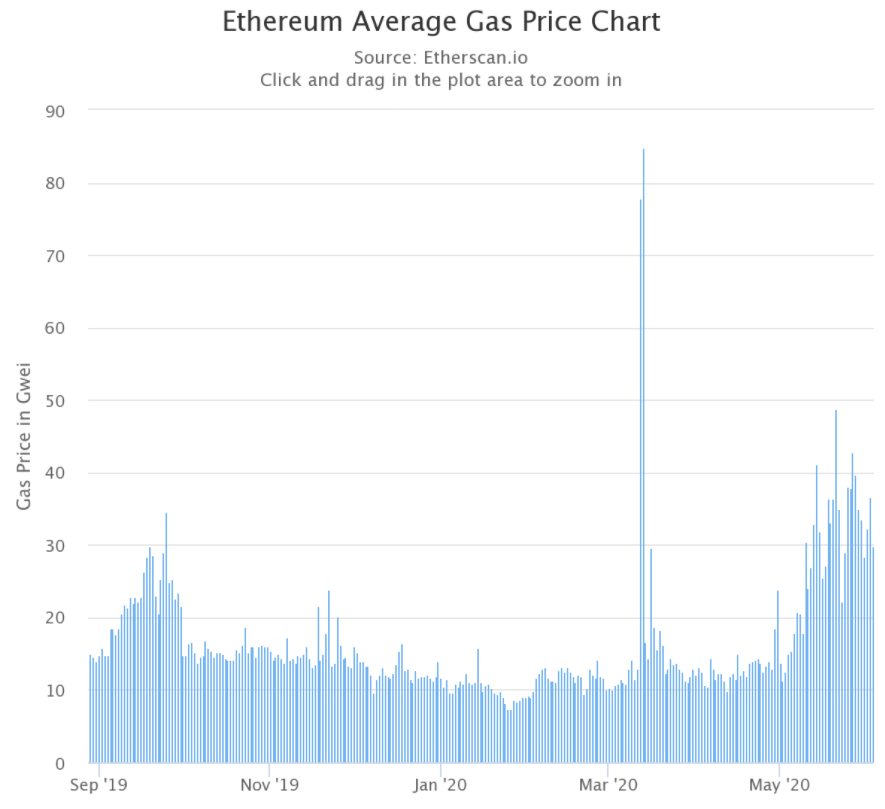 The congestion in the network is caused by an increase in on-chain activity as a consequence of the use of the stablecoin Tether. According to a DappRadar report, Tether and a number of “high-risk” dapps are causing a blockchain spam effect and are the main gas consumers. Tether alone consumes an average of 39.8 Gwei in the last 30 days and has accounted for 10,000 ETH, worth $2 million.

As a consequence, the congestion and high gas prices have started to affect dapps that require low tariffs to operate. The above-mentioned report reveals that the activity in the Ethereum games has plummeted by 83% in the last 30 days, as can be seen in the following graph. 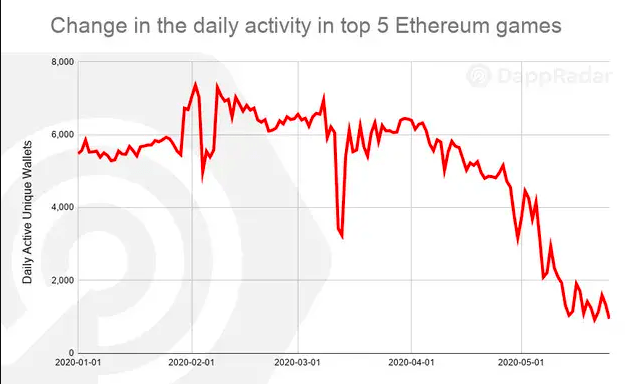 Raising the Ethereum Gas limit, is it feasible?

For the reasons mentioned above, the community and some Ethereum developers have requested an increase in the gas limit or block size. 1inch.exchange took a survey on their Twitter account to ask the Ethereum community if the block size should be increased to reduce gas costs.

Ethereum co-creator Vitalik Buterin responded to the survey and said the proposed minimum increase of 25M is unrealistic. Buterin said an increase of 12 to 15M would be better, as the current gas limit is 10 million. However, even an increase of that size, which is relatively low, is a concern for some developers. The co-creator of Ethereum presented an alternative solution:

Alternatively press to reduce gas costs of specific operations (e.g. cost of base tx -> 14000, change of storage SSTORE -> 4000). This way you can get ~20% capacity increase without forcing any of the things we know are DoS risks.

Other members of the community proposed as a solution to wait for the implementation of the Ethereum 2.0 that i supposed improve the scalability and performance of the network. However, the coordinator of Eth2, Danny Ryan, recently gave an update on the progress of the requirements to launch phase 0 and stated that there is still a stretch of road that will be difficult to travel. Despite this, it is expected that phase 0 of the Ethereum 2.0 will be launched at some point this year.